An Ohio high school has a very simple dress code rule: the three B’s. No boobs, butt or belly button.

Annie Concannon, 17, a senior at Turpin High School in Cincinnati, complied with all of these rules when she wore a fraternity T-shirt and high waisted jeans and sneakers to school and yet multiple teachers found her outfit inappropriate and she was sent to the principal’s office with instruction to change her ‘provocative’ shirt.

The humiliating treatment  and reaction from teachers left Annie in tears, clueless as to where she went wrong and why she was now receiving severe backlash for a non-revealing outfit she had sported at school before.

Distressed damsal: Senior Annie Concannon, 17, at Turpin High School in Cincinnati, Ohio, was sent to the principals office because her  T-shirt and mom jeans violated the dress code 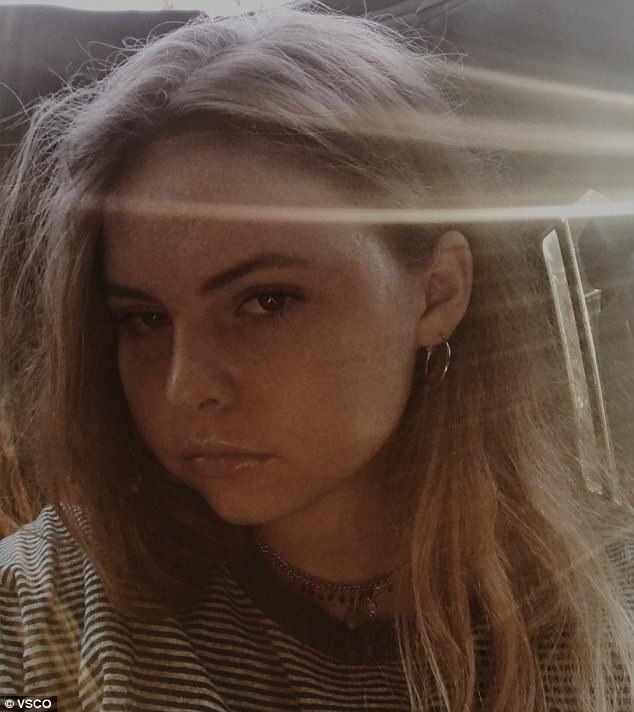 Expressing herself! The Ohio teen expresses her personality through her clothes, but was left in tears when teachers repeatedly found a problem with an outfit she already wore at school

Annie posted a picture onto her now deleted Twitter account displaying her outfit with a thumbs up and a still tearful face, traumatized by the drama of the day over her clothes.

‘I got dress coded for this outfit. Turpin high school. Twitter do your thing,’ she tweeted on October 25.

The photo reveals her in a mustard fraternity shirt for Pi Kappa Phi cut to be slightly cropped but not revealing any midriff, blue mom jeans, white socks and white sneakers.

Her trendy look abides by the three B’s rule, but still got her into trouble in an incredibly embarrassing way.

‘I went into first period with no comments on my outfit, but in homeroom my teacher made a comment in front of my whole class stating my outfit was inappropriate,’ Annie shared to Yahoo.

‘I questioned her comment because I’ve worn that outfit in the past and it seemed completely reasonable to me.

‘She then pulled me out into the hallway stating that I should know better because I’m a senior and that I should not be making her the bad guy in this situation,’ she added.

Against her: Many people on Twitter found problems with Annie’s outfit, saying her shirt was slightly cropped and would reveal skin at certain angles

Just saying! Others agreed that the cut of her top was inappropriate for school environments

Rep your letters! Others conjectured that the fraternity letters on her shirt, that was often mistaken for a sorority, were a part of the problem

Throwback? Her outfit reflected a vintage vibe from the 90s which might have triggered unwelcome memories for the teachers on her case

At the end of the day: Other fans said the teacher was clear by stating the shirt was too short, but Annie didn’t reveal that the school employees described the target issue in that way

Annie struggled to understand why her shirt was controversial as it didn’t show skin. But other teachers seemed to disapprove of her shirt displaying Greek fraternity letters or its slight crop that might reveal skin if she lifted her arms.

‘I was told to go down to the principal’s office and find a new shirt to put on over mine. I disregarded her comment and went to my second-period class without changing. I was really frustrated because my outfit wasn’t breaking our dress code,’ Annie explained.

But much to the teen’s dismay, the homeroom teacher who had originally disapproved of her outfit emailed the entire staff to demand that Annie cover her top up.

When the student headed to her third period class, a teacher told her about the email and demanded she wear a jacket.

‘As I went to third period, my teacher approached me and told me that I needed a jacket put on immediately. She then explained to me that she received an email from the homeroom teacher that was sent to the entire staff that I needed to be wearing a jacket in every period,’ Annie explained.

Realizing she would be chased all day long and harangued for her clothes, she burst into tears.

‘At this point I started crying because I was so frustrated by the situation. I have never been dress-coded before, and I felt the staff of my school put a target on my back,’ Annie added.

The roughest part of the blow of being dress-coded is that it is a very uncommon violation at the high school.

‘People don’t often get dress-coded at my school, and I liked to think that they were pretty reasonable about it. I was just really frustrated with how I was treated, and that the dress code at my school is completely one-sided against the female gender. 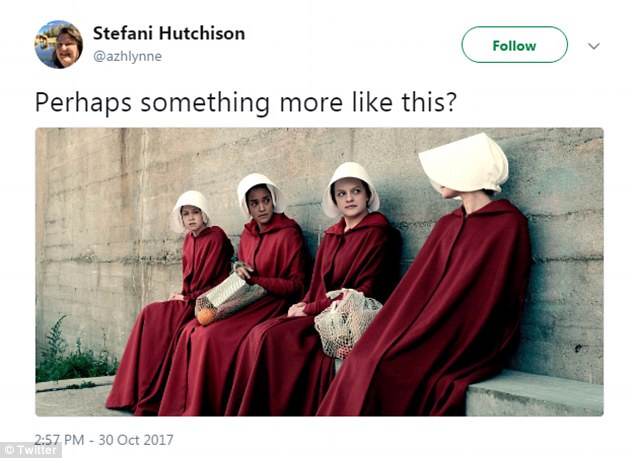 Better? Annie’s argument against the haters was that her outfit didn’t break the dress code and show skin, and fans joked that a more fitting look for her might be a handmaiden’s cape

In the clear! Many rallied to her side to support her outfit, saying she was wrongfully mistreated by her school because she never broke the rules

Takes one to know one! Other Turpin High School alumna responded with sympathy, sharing they too experienced wrongful dress-code violations that they retaliated against

Got you covered! Twitter user Kit told Annie she also attended Turpin and that compared to students in her years, Annie was wearing a perfectly acceptable school outfit

Fine by me! A grandma even tuned into the conversation to offer her two cents to the teen

Stamp of approval! A father on Twitter agreed that Annie had ‘zero wrong’ with her outfit

‘There are almost no rules in place for the boys at my school, but the girls are completely over sexualized,’ she shared, alluding that her slight midriff crop might be the problem.

Despite Annie’s tears, she revealed that she is obstinate when it comes to her outfit choices, and she refuses to be shamed into wearing something else, when she never broke a rule in the first place. No teacher, either, told her directly what her outfit violation was.

‘I plan on wearing my outfit again because I believe it causes no harm. I will wear what I’m comfortable in,’ she added.

Her photo sparked an instant Twitter debate over the appropriateness of her wardrobe choice.

‘If you lift your arms above your head your shirt is too short and abdominal skin will show #CommonSense #StayClassy,’ one Twitter user wrote.

Although she has deleted her Twitter since the debacle, the comments are still streaming in. While many are still against her outfit choice, many, including Turpin alumni are coming to her side.

‘Hey, Turpin alumn here. I got in trouble there for my bra showing. I proceeded to take off my bra (still wearing a shirt). Teacher didn’t even know what to say to that, didn’t say a thing to me after that!’ Emilie wrote.

‘I was a senior in 09 and I’m in tears from laughing remembering the things girls wore then and didn’t get coded for. You’re COVERED oh my gosh [sic],’ Kit tweeted.