Suspended Ohio State football coach Urban Meyer released a statement on Friday to address what he believes is inaccurate reporting about his handling of domestic abuse allegations against a former assistant coach and the exact reasoning behind his three-game ban.

‘… [T]here have been a number of things reported in the media about President [Michael V.] Drake’s decision and the Investigative Team’s report that have not been correct and must be clarified,’ wrote Meyer in a statement he posted on Twitter.

Among the NCAA’s highest-paid coaches at $7.6 million annually, Meyer was punished for his mishandling of domestic abuse allegations against now-former wide receivers coach Zach Smith, who remained with the Buckeyes after his ex-wife Courtney Smith claimed he assaulted her in 2015. She also accused him of abuse in 2009, when Smith worked as a graduate assistant under Meyer at the University of Florida.

The previous allegations against Zach Smith came to light in July when Courtney successfully petitioned the judge to get a protective order against her ex-husband, which led to his dismissal at Ohio State. He continues to deny he physically abused Courtney. The couple divorced in 2016.

Without mentioning any reporter by name, Meyer proceeded to list three issues he has with the coverage: the 54-year old emphasized he was not suspended because he knew about the abuse or condoned it in any way; he insists he did not lie at Big 10 Media Days when he denied knowing about the 2015 allegations to reporters – a statement he later clarified; and the three-time national champion stressed that his real misstep was his failure to take ‘action sooner against a troubled employee.’ 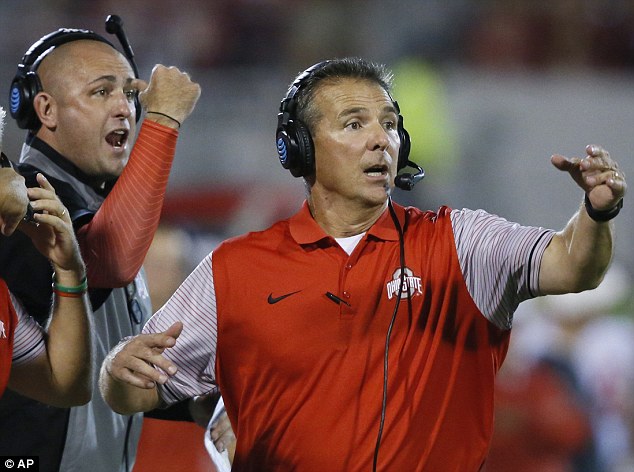 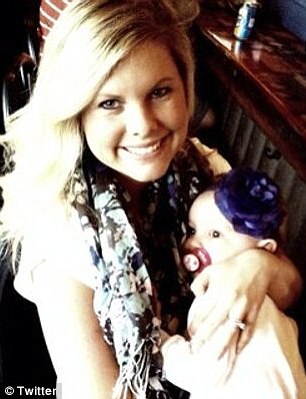 Courtney Smith (left) accused Zach Smith of beating her when the couple lived in Florida in 2009 and again while they lived outside of Columbus, Ohio in 2015

Meyer did not mention it in his statement, but on Thursday it was revealed that one of the school’s trustees, Jeffrey Wadsworth, quit over Drake’s decision to suspend Meyer for only three games, saying the punishment was too light for someone who misled the school’s investigators.

‘You read the report,’ Wadsworth told The New York Times, ‘and there’s seven or eight things about emails, memory loss, hearing things five times, and to me, that raised an issue of standards, values — not how many games someone should be suspended for.’

Regarding Meyer’s claim that he did not lie at Big 10 Media Days, it is true that he school’s report found that he did no ‘deliberately lie,’ but investigators did conclude that his answers were false.

According to several reports, Meyer was asked if he was aware of alleged incidents with Zach in 2009 and 2015, to which Meyer said, ‘In 2015, there was nothing.’

If by ‘nothing,’ Meyer meant that there had not been an arrest, then he was being truthful. Smith was not arrested for domestic abuse at the time, and has never been charged with abuse.

And because Zach Smith wasn’t arrested for domestic violence in 2015, neither Meyer nor athletic director Gene Smith (no relation) believed they were obligated to report it to university officials – a violation of their contracts.

‘And we credit that Coach Meyer, in answering reporters’ questions on July 24th was closely focused on erroneous reports that Zach Smith had been arrested on felony charges in 2015 which Coach Meyer had determined the night before not to have occurred,’ read the investigation report.

‘But his answer swept more broadly than the falsely reported arrest and Coach Meyer falsely stated he lacked knowledge of all the relevant events regarding alleged domestic violence by Zach Smith in 2015. While those denials were plainly not accurate, Coach Meyer did not, in our view, deliberately lie.’ 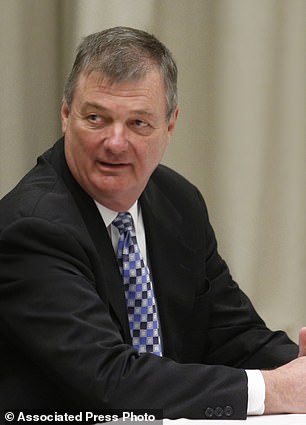 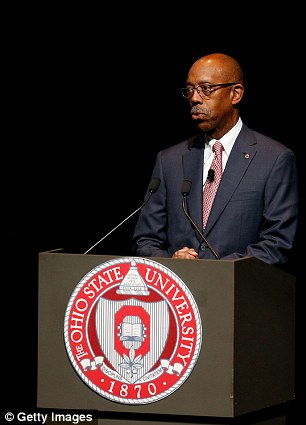 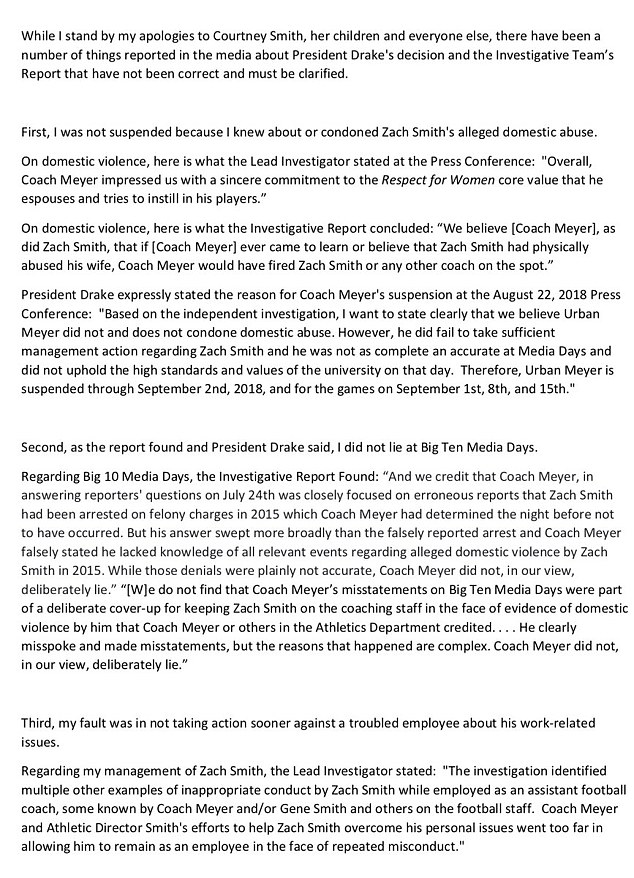