Kali Kushner always struggled with small cases of acne in high school, but at 19 years old she developed severe red marks that went deep into her skin tissue.

The now 22-year-old student from Cincinnati, Ohio, tried everything on the market and found that most medication was only making her cystic acne worse.

Her dermatologist recommended an oral medication and within three months she was able to finally see improvements to her skin.

But 22,000 followers later, she now realizes how much her skin struggles have inspired other people.

Kushner is now is off of the medication because of the adverse effects including severe dryness, but speaking to Daily Mail Online she said the short stint on the pills has transformed her skin, leaving her with just a few minor flare-ups since. 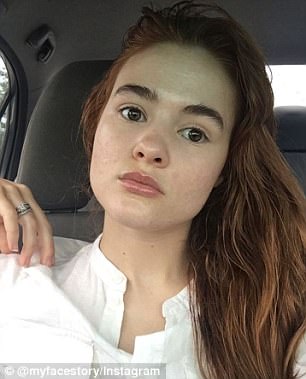 Kali Kushner, 22, is open on her account about her skin transformation and how she was able to find confidence in areas of her life that don’t involve physical beauty. Left is her more than a year ago before Accutane and right is from a post in July showing off her clear skin 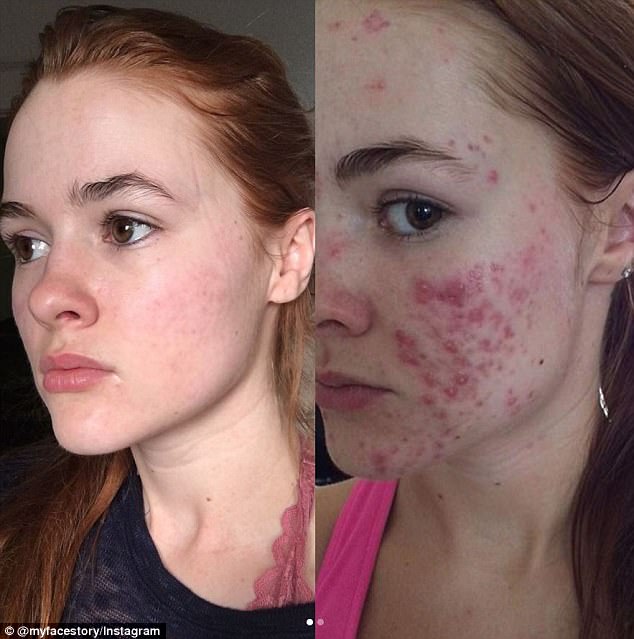 Kushner tried many different drugs and treatments to improve her acne. One treatment she tried was the oil cleansing method. But the method didn’t work for Kushner. She posted this in April to show her followers how far her skin has come

Kushner developed severe cystic acne when she was 19 years old, but she hadn’t changed anything with her diet or skin care.

She turned to a dermatologist to help find something to clear up her skin.

‘I spent a lot of money on stuff that didn’t work,’ Kushner said.

Besides going on multiple types of medication that showed minimal results, she also tried a variety of skin methods.

What is cystic acne and how can it be treated?

Cystic acne is large, red and painful breakouts that develop deep into the skin tissue.

These breakouts can be treated, but also might linger for years depending on the person’s skin.

They can form in large areas across the face and cause permanent scarring.

While these puss-filled bumps can be painful, it is recommended to not pop them. This is because it can help the infection spread to more areas of the face.

Accutane is a common medication that is used by people who are suffering from severe acne.

But it can cause adverse effects on the skin including severe dryness.

She used the oil cleansing method by using natural oils to clean her face, but this yielded no change to her skin.

Then she tried the caveman method where she would put nothing on her face including makeup, cleansers and lotion.

And that only made her skin worse.

As a last ditch effort, Kushner turned to Accutane, an acne medication known for its strong and adverse effects on the skin.

She instantly experienced dry skin, eyes and back aches from taking the medication.

‘Everything gets dried out,’ Kushner said. ‘Your whole body aches.’

But three months later, she noticed for her skin clearing up for the first time in years.

Accutane is a popular acne medication that is only available if prescribed by a doctor because of its strong side effects.

The oral medication, made with vitamin A, is used to reduce the oil production released by the skin glands.

This is why people experience extreme dryness and irritation when they take it for long periods of time.

But she made it public once her sister asked to see the pictures, and other followers flooded in with her.

She receives messages every day from people asking for advice and commenting on her acne journey.

But Kushner has wanted to make her account a positive experience where outer beauty shouldn’t be the main message. 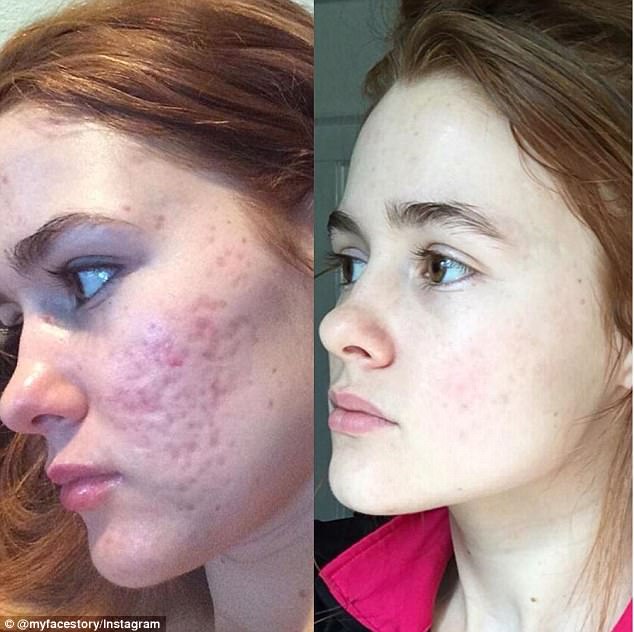 ‘Your skin doesn’t define you,’ Kushner said. ‘A lot of people equate confidence with physical beauty, but I’ve never thought of the two in the same boat.’

The ability for her to share her story has helped her find acceptance with her own skin and improved her mental health.

‘Confidence is all about achievement and reaching my own life goals,’ Kushner said.

She wasn’t always confident with her skin.

Two years ago, she would rarely go a day without wearing makeup and would even sleep with her face covered so her husband wouldn’t see the cystic acne.

‘I relied heavily on makeup just to even leave the house,’ Kushner said. ‘I never felt comfortable without out it.’

But now she has gone more than five months without wearing anything on her skin.

She stopped using Accutane for almost a year after being on it for six months.

This has caused her to still experience problems with her skin, but she said isn’t looking to go back on the medication again because of its side effects.

‘Right now I am very happy with the progress I have made.’

Instead of relying on medication to help with further acne, Kushner has found that altering her diet by removing dairy and some sugars has given her positive results.

‘I really just try to take care of my body as a whole,’ Kushner said. 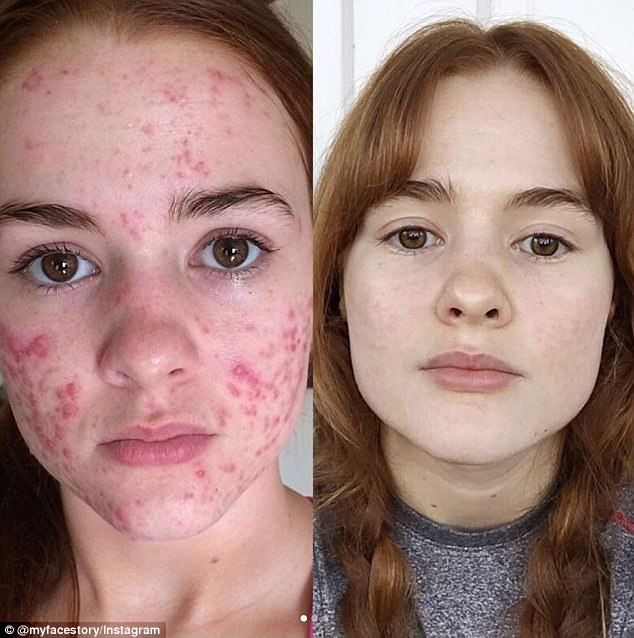 Kushner’s message on her Instagram page is ‘your skin doesn’t define you.’ She still struggles from acne but has learned through that she doesn’t need to wear makeup to feel beautiful and confident with her skin. She posted this in September to show her transformation