Ohio’s Republican Governor has announced his state will begin to reopen on May 1 as other areas, including New York and Washington DC, extend lockdowns by up to three weeks.

Gov Mike DeWine said on Thursday that the state is planning to reopen some businesses when President Donald Trump’s lockdown guidance ends in two weeks.

The state currently has more than 8,400 infections and nearly 400 deaths.

‘We must get Ohio’s economy moving again. We must get people back to work,’ DeWine said during his coronavirus briefing.

The governor said he had put together an economic advisory board, which is made up of small and big business CEOs, as part of the plan to start reopening come May 1.

Gov Mike DeWine said on Thursday that the state is planning to reopen some businesses when President Donald Trump’s lockdown guidance ends in two weeks. He is pictured above on Wednesday at his daily coronavirus briefing

In re-opening any business, DeWine said it was essential to provide a safe working environment to avoid a spike in coronavirus cases.

‘During the stay at home time, the companies that were allowed to continue have learned a lot and we’ve seen them put in place some very, very stringent measures. In a sense, this has been a trial period where we can see some of the things that work,’ he said.

He said the advisory board was currently working on the plan, saying: ‘We’ve got a lot more work to do between now and May 1 because we want to get this right.’

DeWine did, however, warn that life would not resume as normal for some period of time.

‘I am an optimist and am confident that Ohioans will also live up to the challenge of doing things differently as we open back up beginning on May 1,’ DeWine said.

His announcement came ahead of a planned call with President Donald Trump and the governors of each state that took place Thursday afternoon.

Trump unveiled his administration’s plans to ease social distancing requirements on the call. The new guidelines are aimed at clearing the way for an easing of restrictions in areas with low transmission of the coronavirus, while keeping them in place in harder-hit locations. 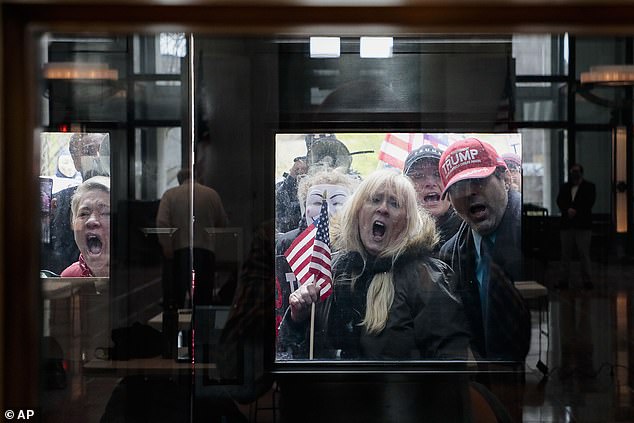 The announcement came after protesters continued to gather across the US, ignoring social distancing rules, to demonstrate against the lockdown orders they called ‘tyrannical’ and ‘worse than the virus’. Protesters are pictured outside the Ohio Statehouse on Monday 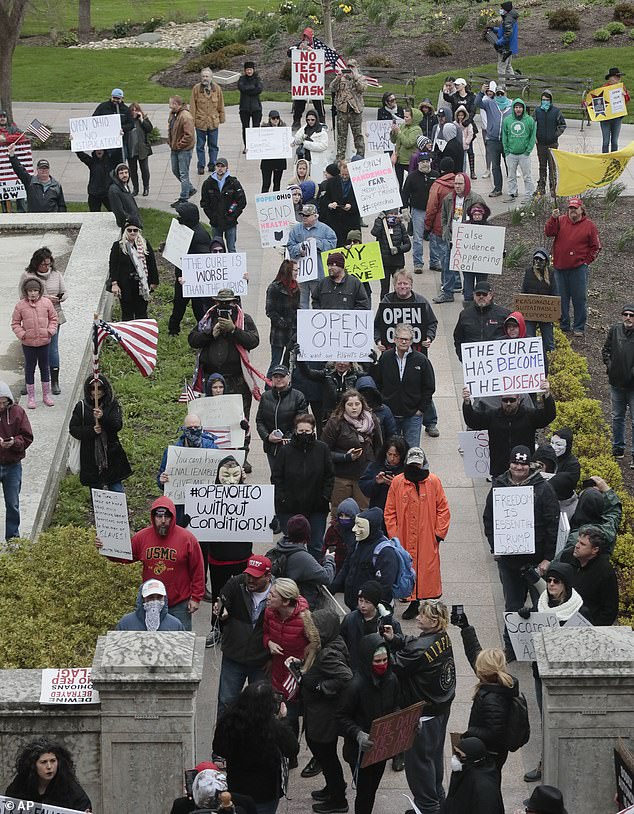 Places with declining infections and strong testing would begin a three-phased gradual reopening of businesses and schools, with each phase lasting at least 14 days, meant to ensure that the virus outbreak doesn’t accelerate again.

The recommendations make clear that the return to normalcy will be a far longer process than Trump initially envisioned, with federal officials warning that some social distancing measures may need to remain in place through the end of the year to prevent a new outbreak.

At earliest, the guidelines suggest that some parts of the country could see a resumption in normal commerce and social gatherings after a month of evaluating whether the easing of restrictions leads to a resurgence in virus cases. In other parts of the country, or if virus cases resume an up-tick, it could be substantially longer.

Meanwhile, seven Midwestern governors – including Ohio – announced on Thursday that they will coordinate on reopening their state economies after similar pacts were made in the Northeast and on the West Coast.

DeWine and Holcomb are Republicans and the rest are Democrats.

Several governors, including Whitmer, have been criticized for their shutdown orders and the resulting negative economic impact. 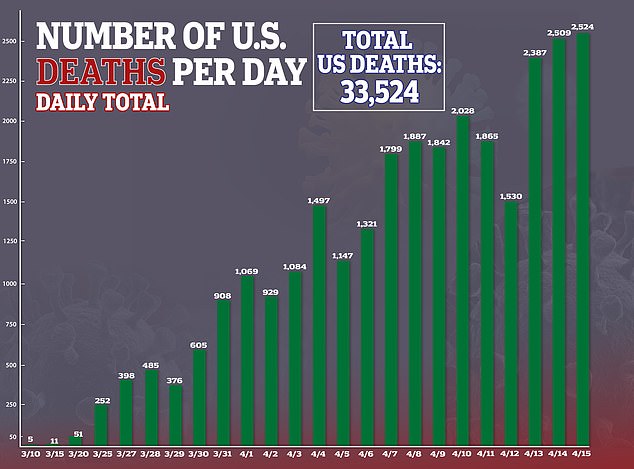 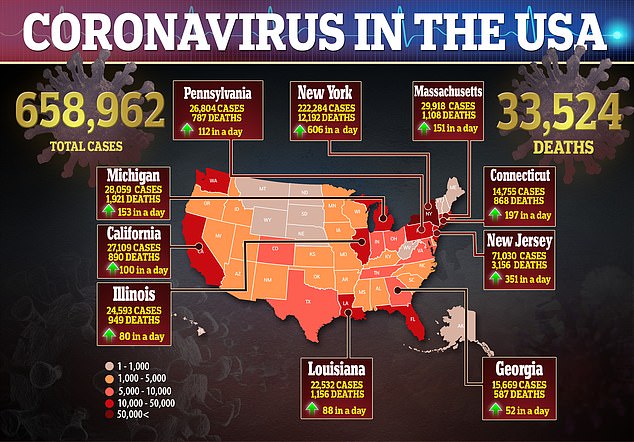 Many Republicans and business leaders in Michigan have said Whitmer’s latest order was too restrictive and needed to be revised. On Wednesday, thousands of demonstrators in cars with horns honking thronged around Michigan’s state Capitol to protest Whitmer’s order.

Protesters continued to gather across the US, ignoring social distancing rules, to demonstrate against the lockdown orders they called ‘tyrannical’ and ‘worse than the virus’.

A startling image from Ohio showed a baying crowd at the window of the Statehouse Atrium on Monday. Two protesters wore Trump hats, others waved American flags and one was in a V for Vendetta mask.

Ohio’s decision to reopen on May 1 comes as other states and areas across the country extended their lockdowns or tightened stay-at-home orders.

In Washington, DC, Mayor Muriel Bowser extended the city’s stay-at-home order, school closures and business restrictions from April 24 to May 16.

The governors of three states – Virginia, Kansas and Idaho – also pushed back the dates on social distancing policies on Wednesday, as did officials in cities across Missouri, Texas and Louisiana.

On Thursday, New York Gov Andrew Cuomo extended his stay-at-home order until May 15 and Wisconsin Gov Tony Evers extended his through May 26.