Oil and gas supermajor set to hand 4bn back to investors: Shell cashes in as energy prices surge

Shell has cashed in on spiralling energy prices that are pushing up household bills and driving suppliers to the brink of collapse.

The FTSE 100 oil major said profits in its gas division will be ‘significantly higher’ in the fourth quarter than in the previous three months following an astonishing jump in wholesale prices.

With the oil price also on the rise, analysts believe Shell is on course to post profits of £12billion for 2021 following a £16billion loss in 2020 during the depths of the pandemic. The bumper profits are likely to spark a backlash at a time when household energy bills are soaring, with critics now calling for a windfall tax to help alleviate pressure on hard-pressed families.

Astonishing: Shell said profits in its gas division will be ‘significantly higher’ in the fourth quarter than in the previous three months

Undeterred, Shell also revealed plans to fast-track a scheme to return a further £4bn to shareholders.

The company said in a trading update that it would continue a stock buyback programme ‘at pace’. Shell has promised to redistribute £5.1bn to investors in total from the sale of its US Permian Basin shale business to Conoco Phillips last year, and has already handed back £1.1billion.

The acceleration of the buyback will be welcomed by savers and pensioners who rely on dividends and other shareholder returns for income. Shell rocked the City when it slashed its dividend by two-thirds in spring 2020 after oil prices tumbled in the pandemic and it needed to save cash.

The dividend cut hit millions of ordinary Britons as well as big institutional investors. Shell is due to report its full results for 2021 in early February.

Its bumper profits will come against a backdrop of a mounting cost of living crisis for millions of households as energy bills soar. It is feared the energy price cap could rise by as much as 50 per cent in April, pushing a typical annual bill up from £1,277 towards £2,000. 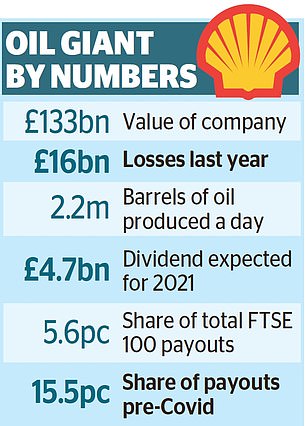 Soaring prices have also led to the collapse of 26 energy suppliers as the price cap means they cannot charge customers enough to cover their costs.

The rally in wholesale gas prices has been caused by a perfect storm of factors including lower supplies from Russia, a lack of wind energy and a shortage of reserves. Shell’s recovery since the worst of the pandemic has seen it overtake Astrazeneca to again be the largest firm on the FTSE100 with a value of £132billion.

But it is fighting off an attack from activist investment firm Third Point which has built up a substantial stake in Shell and is urging it to split into multiple entities.

Shell has refused to do this, with boss Ben van Beurden insisting that the only way the company can hit its target to be net zero by 2050 is to use the proceeds from oil and gas to invest in green energy.