By Angharad Carrick For This Is Money

Dividend payouts by UK-listed companies have started to recover from the worst of the pandemic, with oil companies driving recent growth.

The headline figures show payouts early this year were 24.9 per cent lower than the first quarter of 2021 but this is in large part because Tesco paid out a large special dividend in 2021. BHP’s migration to Australia, consolidating its dual listing into one, also affected the headline total.

However on an adjusted underlying basis, which excludes special dividends, UK dividends of £13.3billion were 4.2 per cent higher than in the same period last year, according to the latest Dividend Monitor by Link Group.

Dividends in the oil sector are expected to top £9.5bn this year as crude prices soar

After accounting for the loss of BHP, payouts were up 12.2 per cent in the first quarter of this year.

The oil sector drove the increase in dividends in this period, upping payouts by £505million, or 29 per cent.

Dividends in the sector were slashed during the pandemic when crude prices crashed but now as they rebound oil majors have enjoyed increased cash flow.

Oil dividends are expected to top £9.5billion this year, according to the Dividend Monitor, a significant recovery from the £7.3billion they slumped to between the third quarter of 2020 and the second quarter of 2021.

Healthcare payouts were also strong in large part because of the long-awaited payout from Astrazeneca, which has bought rare diseases specialist Alexion in the US.

It issued shares to complete the acquisition and the shares now qualify for a dividend. It also made its first increase in nearly a decade, lifting its payout by 5.7 per cent. 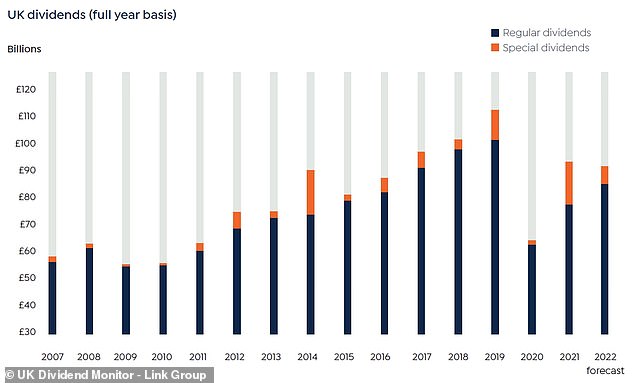 All sectors increased underlying dividends in the first quarter and even retailers have shown some signs of revival with large special dividends from Next and B&M European Value. But dividends remain scarce from the embattled travel and leisure industry.

‘We anticipate the rest of the year to surpass our expectations. The war in Ukraine is partly responsible as it has pushed oil and metals prices ever higher, driving strong profits in related sectors,’

‘The mining sector cannot sustain its breakneck pace of dividend increases nor the size of its special dividends indefinitely, but the boom continues for now. Meanwhile the oil sector is back – both in the black and in the headlines – though its distributions would have to double to regain pre-pandemic highs.

‘In inflationary times, investors have often looked to commodities like these as a hedge against rising price levels elsewhere in the economy.’

Link Group has upgraded its forecast for dividends this year by £4.5billion and around four fifths of this is owing to the boom in mining dividends.

Higher oil prices have also helped, accounting for nearly a tenth of the increase, and the improvement in UK banks’ position is also contributing to a faster recovery.

Link Group now expects underlying dividends to reach £85.8billion, which is 11.1 per cent higher than 2021 and adjusted for BHPs departure gives an underlying increase of 15.2 per cent.

It expects UK listed companies to yield 3.7 per cent reflecting the increased forecast for dividends.

‘There are risks to our forecast view of where dividends are heading, related to the constraint on consumer demand caused by energy price hikes here and around the world, and related to cost pressures that will weigh on margins for a number of sectors. Mid-cap companies are more likely to show any strain than the top 100,’ said Stokes.