An oil executive flew into a rage and battered his wife because she had a glass of wine before lunchtime.

Quentin Livingston-Taylor, 54, has been ordered to fly back from Saudi Arabia to be sentenced by a Scottish sheriff.

Perth Sheriff Court heard today how Livingston-Taylor lashed out at his wife after suspecting she had been drinking while he was out in the morning.

Fiscal depute Matthew Kerr told the court: ‘The complainer and the accused have been in a relationship for six years and have been married for three years.

Quentin Livingston-Taylor, 54, (right) accused his wife (left) of being drunk and lying about it at their Perthshire home, sparking a row which resulted in him punching and kicking his wife

‘At about 1pm the accused returned and and there was an argument with the complainer.

‘There was information in the police report that earlier in the day the complainer had a glass of wine.

‘The argument stemmed from the accused accusing the complainer of being drunk and lying to him about it.

‘They were in the living room when the accused punched the complainer to the head. As she bent over the accused kicked her to the backside, knocking her to the ground.

‘The accused continued to punch and kick the complainer as she was curled up on the ground to try and protect herself. The complainer dialled 999.’

When the police arrived, Livingston-Taylor was standing in his driveway while his visibly upset wife was inside their Perthshire home with a burst lip.

Livingston-Taylor was taken into custody and told officers: ‘It was a domestic argument only. I did not assault my wife.’

But when the case called in his absence yesterday, he admitted punching, kicking and injuring Anne-Sophie Taylor, 47, on Newmiln Estate, Guildtown, on 15 April. 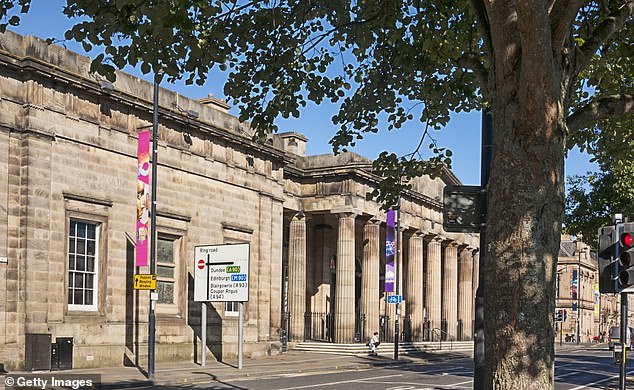 Sherriff court building in Perth where Livingston-Taylor, 54, was found guilty in his absence

Solicitor Pauline Cullerton, defending, said her client had been attending anger management classes prior to departing for Saudi Arabia to undertake a work project.

She said: ‘He is a first offender and is very sorry and remorseful for his actions. He is taking steps to dealing with his anger management issues.

‘Both parties are hopeful the relationship can be reconciled. At the moment he doesn’t know how long he is going to be in Saudi Arabia for.

‘There are no foreseeable flights back to the UK. There has been an outbreak of Covid19 on the oil rig he was working on. He has indicated he may struggle to get back.’

Sheriff Keith O’Mahoney said: ‘This appears a fairly sustained assault, punching and kicking her while she was on the ground.

‘I will defer for eight weeks in the hope the accused will be able to return to this country in time to have that done. He is required to appear on that date.’

Livingston-Taylor was ordered to appear for sentence on 8 October.