OJ Simpson’s lawyer is blasting Florida’s attorney general as ‘possibly the stupidest person on the planet,’ after she objected to Simpson’s plans to be paroled in the Sunshine State.

Florida Attorney General Pam Bondi released a letter to the Florida Department of Corrections urging its secretary to tell officials in Nevada that it does not want him to become a resident.

Simpson’s attorney Malcolm Lavergne called Bondi a slew of expletives in an enraged reactionary interview with the Tampa Bay Times. ‘What a complete stupid b—-. F— her,’ Lavergne said Monday.

Simpson signed papers for release from prison after serving nine years behind bars. Simpson hopes to be paroled in Florida soon 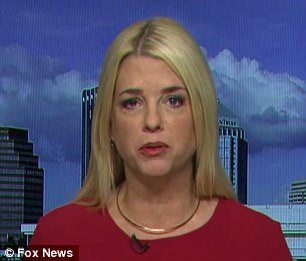 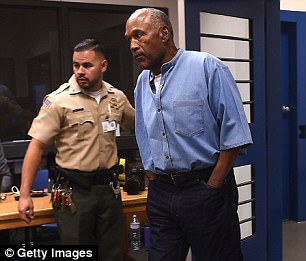 ‘She has zero standing to even talk about Mr. Simpson’s case. She’s the attorney general, she has nothing to do with it. It’s virtually a foregone conclusion that Simpson will be moving to Florida when he chooses and once Nevada approves it. That’s handled by the Nevada Division of Parole and Florida department of corrections, not the attorney general.’

Lavergne, who had just spoken with Simpson before the interview about Bondi’s letter, said the former football star was upset to hear Bondi was trying to block him from being paroled in the next few months to Florida.

‘He’s very, very, disturbed by it,’ Lavergne said. ‘To him as a 70-year-old black male in America, he lived through a time when white people did get to tell black people where they could live. It reminds (Simpson) of when he first moved to lily-white Bel Air, and the people there tried to keep him out and make his life miserable.’

Also, Lavergne argued Simpson has a right to move to be near his children in St Petersburg under the rules of the Interstate Compact, which says states must accept transfers if certain criteria is met. 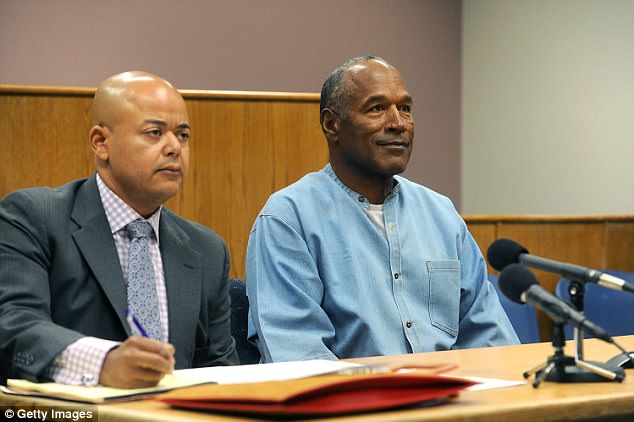 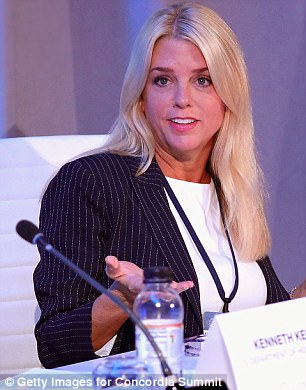 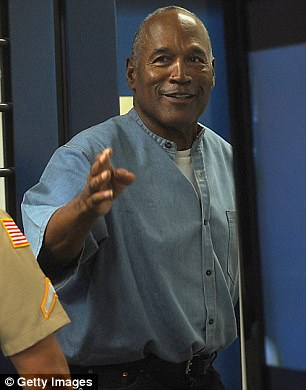 Florida Attorney General Pam Bondi (L) has written a letter to the Department of Corrections asking it to inform Nevada officials that she does not want OJ Simpson (R, at a parole hearing in July) to become a Florida resident

‘This is about a career prosecutor who has handled parole hearings in Florida for 20 years and a violent criminal trying to move to our state,’ Bondi spokeswoman Whitney Ray said via email to Tampa Bay Times. ‘As chief legal officer it is the Attorney General’s duty to protect the citizens of Florida … The Attorney General remains in constant contact with FDC regarding the matter.’

But Lavergne argued that Simpson has every reason to be in Florida.

‘He has zero circumstances that would prevent his transfer. Florida has a million felons running around. Is he the only parolee in Florida?’ Lavergne said. ‘He has good reason to come there. It’s not like he’s going to Iowa or some state where he has no connection.’

In the letter to Florida’s Department of Corrections on Friday, Pam Bondi used the 1994 murders of Simpson’s ex-wife Nicole Brown and her friend Ron Goldman, which Simpson was criminally acquitted of but found liable for in subsequent civil lawsuits, among her reasons why he should not be allowed to settle in the Sunshine State.

Another was a previous conviction for speeding in his powerboat in a manatee zone.

Simpson’s lawyers told his parole board there was ‘no doubt’ he would be setting up his new life in Florida in the months following his release.

The 70-year-old was released from Lovelock Correctional Center early Sunday morning after serving nine years behind bars for armed robbery. He was granted parole earlier this year.

The former NFL star has not given detailed plans of where in Florida he wants to live, but it’s likely he will choose somewhere close to his two children in St. Petersburg.

His oldest daughter Sydney, is now 31. She was spotted in St. Petersburg last year, while his youngest is Justin, who is a real estate agent based in south Florida.

During his parole hearing in July, he joked: ‘I could easily stay in Nevada but I don’t think you guys want me here.’ 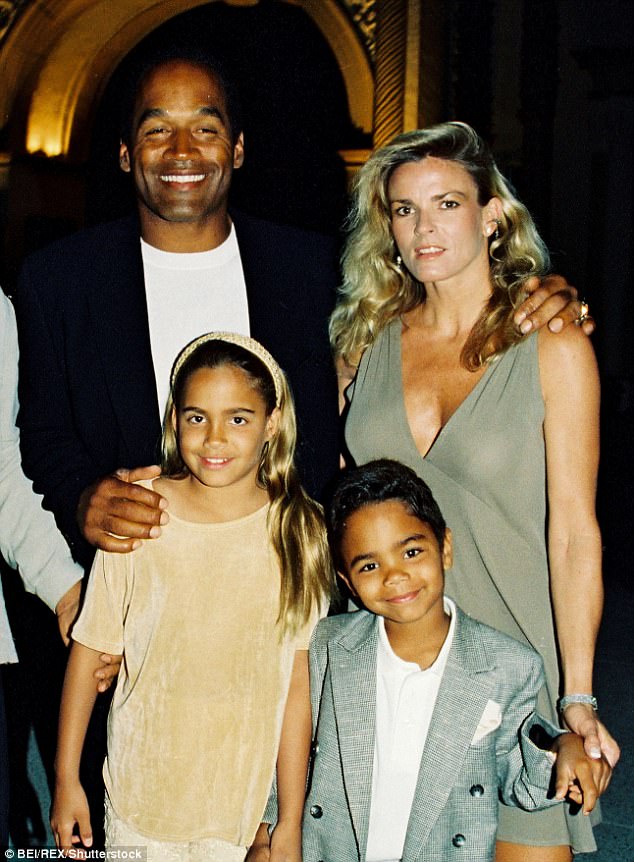 In her letter, Bondi pointed to the 1994 murder of Simpson’s wife Nicole Brown and the fact that he had been found civilly liable for it despite being acquitted of murder. The pair are seen with their children Sydney and Justin before Brown’s death. Now adults, the kids both live in Florida

Sydney and Justin Simpson were at home sleeping when their mother was slaughtered on their doorstep in Brentwood, California, in 1994.  Brown’s killer has never been caught. 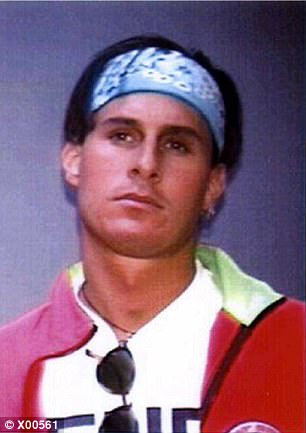 In July, the state’s Department of Corrections said it would have to accept him if Nevada officials were satisfied.

‘We are aware of his potential relocation to Florida. Pursuant to the Interstate Commission on Adult Offender Supervision, if Nevada’s request meets all criteria, Florida must accept the transfer,’ the Florida Department of Corrections said in a statement.

‘As is the case with any offender who transfers under this routine procedure, he will be assigned a Florida probation officer and will be supervised in accordance with the conditions of his parole.’

Simpson was acquitted of the 1994 murders in what was arguable the most highly publicized murder trial in recent history.

He was however found culpable for Brown and Goldman’s deaths in a civil lawsuit later.

As part of the judge’s decision in that lawsuit, he was ordered to pay $33.5million to their families in damages.

On Friday, DailyMailTV exclusively revealed previously undisclosed FBI documents which suggest he hid his money before going to jail in 2008 for his robbery conviction.

He had managed to avoid paying the families’ money since the civil lawsuit verdict in 1997.

Given the amount of time which has now passed and interest accrued, Simpson is on the hook for damages of more than $100million.

His armed robbery conviction stems from an incident in a Nevada hotel room in 2007.

He claims he was going to retrieve stolen sports memorabilia with a group of friends who were heavily armed. 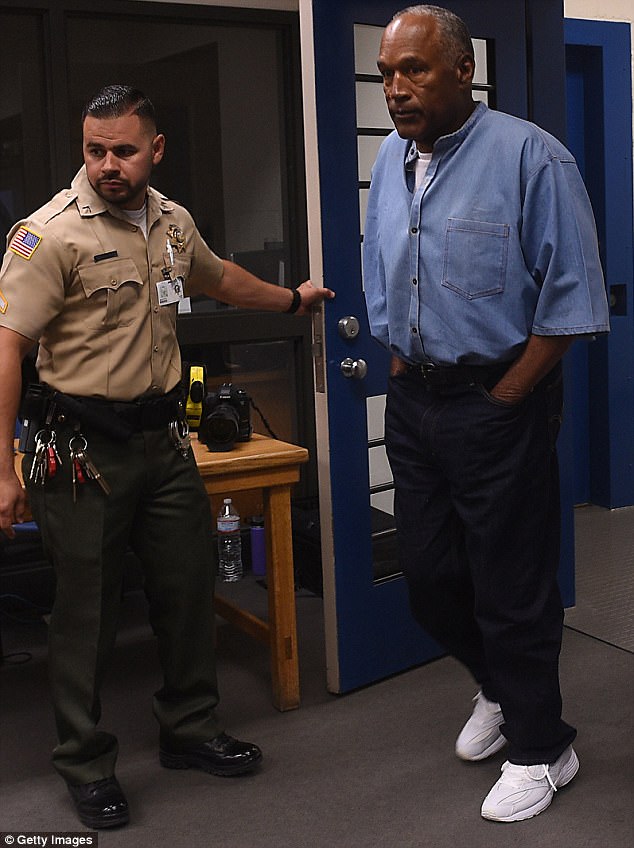 Simpson, now 70, has been in jail in Nevada for the last nine years for armed robbery but was released Sunday. He is pictured here in July