Oklahoma University quarterback Dillon Gabriel was forced off after a nasty hit from opposition linebacker Jamoi Hodge while his side was down 34-10 to TCU.

OU’s junior starting quarterback was viciously hit with a helmet-to-helmet shot by TCU linebacker Hodge as he slid with 9:40 remaining in the second quarter.

Hodge lunged himself at the Oklahoma signal-caller and was virtually parallel to the turf by the time he leveled Gabriel.

The Sooners star initially lay motionless on the turf, staying down for several minutes.

Players had to be separated after Hodge’s hit before the UCF transfer, surrounded by medical staff, found the strength to walk off the field with help.

Hodge was flagged for targeting and ejected from the game.

It was a dark day all round for Oklahoma in Fort Worth, TX. in what was their second successive loss under first season head coach Brent Venables.

TCU quarterback Max Duggan ran 67 yards for one of two touchdowns and threw for three scores, leading TCU to a 55-24 rout of the No. 18 Sooners. 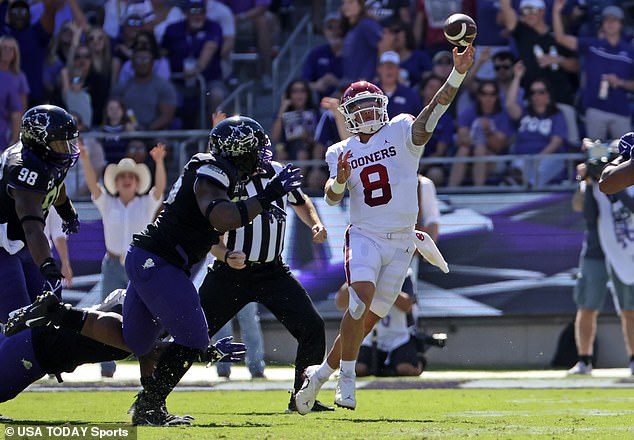 Gabriel and the Sooners were absolutely uncompetitive against a fearsome TCU squad in TX.

Oklahoma’s defense was no match for Duggan and company as OU lost consecutive regular-season games for just the second time since 1999.

The Sooners (3-2) opened conference with a home loss to Kansas State. It’s the most points Oklahoma has allowed since a 63-28 loss to LSU in the 2019 national semifinals.

The Horned Frogs (4-0) had four touchdowns of at least 62 yards, topped by Taye Barber’s 73-yard catch during a 27-point first quarter.

TCU led 41-17 at halftime with 479 yards while finishing with 668 yards in coach Sonny Dykes´ Big 12 debut after four seasons at crosstown rival SMU. 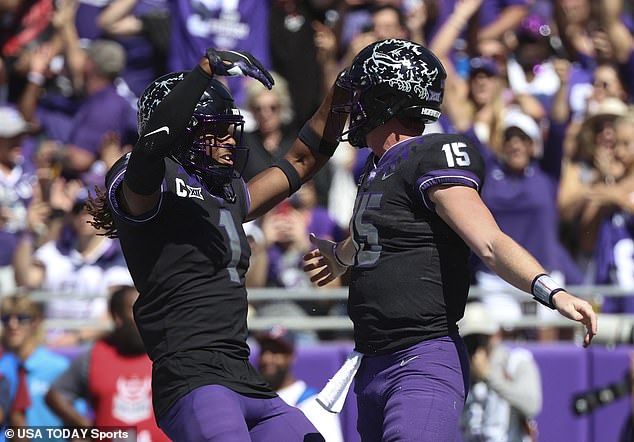