‘Can’t quite believe I managed to get into it!’ Ola Jordan shows off her figure in a tight red dress as she turns 40 – after admitting she’s ‘horrified and disappointed’ with her weight gain

Ola Jordan continued her 40th birthday celebrations after slipping into a tight red dress on Sunday – but admits she has no idea how she managed to even get the garment on.

The former Strictly Come Dancing professional, who celebrated her personal milestone on September 30, has been open about suffering post-pregnancy weight struggles after sharing an unflattering photo of herself modelling a pink bikini in July.

Taking to Instagram two days after her birthday, Ola – who recently expressed dismay with her fuller-figure – appeared to be delighted while showing off the form-fitting dress as she thanked followers for their messages.

Delighted: Ola Jordan continued her 40th birthday celebrations after slipping into a tight red dress on Sunday – but admits she has no idea how she managed to even get the garment on

Captioning the post, she wrote: ‘The big 40!!! Can’t quite believe I managed to get into this dress but I’m hoping it will distract from the number behind!!!

‘Thanks so much to all of you gorgeous people who’ve been sending me happy birthday wishes. I have had an amazing weekend thanks to my wonderful hubby James Jordan, my family and my friends.

‘The hangover is real today let me tell you. But it was worth it.’ 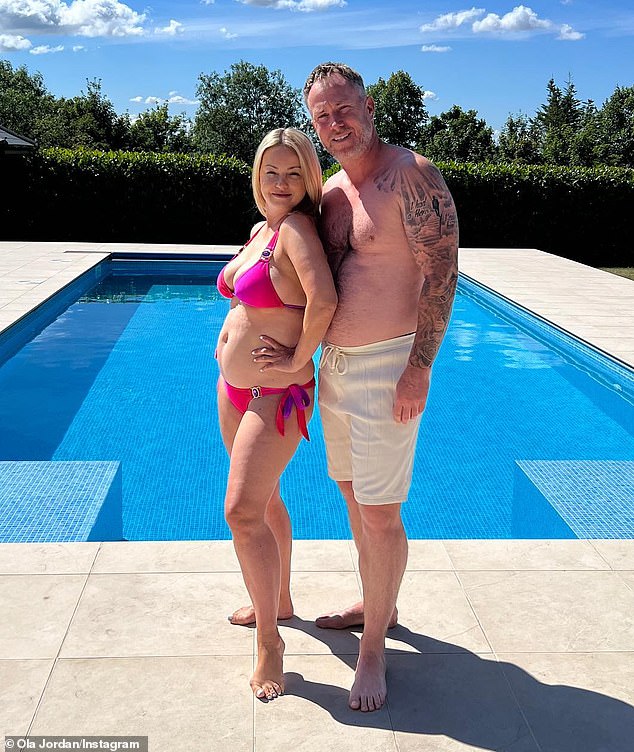 Previously: The former Strictly Come Dancing professional has been open about suffering post-pregnancy weight struggles after sharing an unflattering photo of herself in a pink bikini 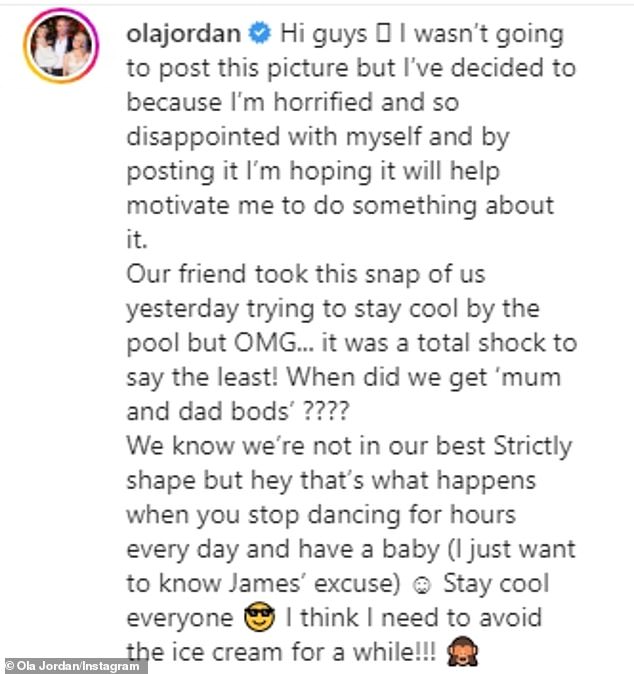 ‘Disappointed’: In a caption, Ola said she was posting the snap to ‘motivate’ herself

Taking to Instagram in July, the Polish-born ballroom dancer candidly admitted she felt ‘horrified’ and ‘disappointed’ at what she perceived as her ‘mum bod’ after sharing a holiday photo with followers.

Captioning the image, in which she poses alongside husband James, she wrote: ‘Hi guys, I wasn’t going to post this picture but I’ve decided to because I’m horrified and so disappointed with myself and by posting it I’m hoping it will help motivate me to do something about it.

‘Our friend took this snap of us yesterday trying to stay cool by the pool but OMG… it was a total shock to say the least! When did we get ‘mum and dad bods’ ????

‘Stay cool everyone. I think I need to avoid the ice cream for a while!!! Couples That Eat Together Stay Together.’