Old hi-fi equipment, once thrown out as junk, is making a comeback thanks to a vinyl revival, regularly selling for thousands of pounds.

A key part of the appeal is that vintage equipment – turntables, amplifiers and speakers – can also be plugged into modern music systems to be enjoyed.

And rather than being decorated in black plastic or flimsy metal, earlier equipment is often more visually appealing and housed in wood.

This is because in previous eras hi-fi was often designed to fit in with home furniture rather than be shown off as a modern accessory.

Music to the ears: A key part of the appeal is that vintage equipment – turntables, amplifiers and speakers – can also be plugged into modern music systems to be enjoyed

Robin Brunson, of vintage hi-fi dealer Audio Gold in Muswell Hill, North London, says: ‘A growing number of enthusiasts are keen to enjoy music on the equipment it was originally designed to be played on – and there is nothing quite like having an old record spinning on an original player of the era rather than being streamed or heard on a CD.’

He adds: ‘It is also important to be aware that just because something is vintage, it does not mean you are using equipment that is inferior to modern music systems.

‘In many cases, not only is the build quality better but the sound of the music produced is superior to that of a new gadget.’

A revival in vinyl has seen record sales increase by 50 per cent year on year, overtaking sales of CDs. This has helped push up the value of old turntables.

Nick Besley, owner of Emporium HiFi near Bungay in Suffolk, says: ‘Undoubtedly, renewed interest in vinyl has led to a growth in demand for turntable decks. Classic players that were selling for about £200 in the late 1980s now sell for £2,000 or more.’

Among the most revered turntables is the Garrard 301 released for sale in 1954. It was originally sold as a separate deck with the owner making their own plinth cabinet for it.

Details on how to cut out a plinth to fit the turntable were included in the purchase instructions.

You can now pay £2,000 or more for a rare grey model, while the later 401 version released in 1965 changes hands for £1,000. Linn has been making traditional record players since 1973 and interest in the Glasgow-based company’s products continues to soar.

You can spend £1,500 on an early LP12 deck, but if it is fitted with a top quality cartridge with stylus, a great tonearm and a beautiful wooden cabinet, it can sell for £4,000 or more.

Those seeking a futuristic look from the past might also consider a 1964 Transcriptors Hydraulic Reference Turntable as seen in the 1971 Stanley Kubrick movie A Clockwork Orange.

The David Gammon-designed turntable can now sell for about £2,500 and would not look out of place in any 21st Century high-tech musical set-up.

Besley says: ‘The revival of interest in old hi-fi gear does not stop with record players – the rarest iconic speakers can sell for a huge fortune. We have a pair of Western Electric 16A speakers that were made in 1929 that are up for sale at £100,000.

‘They were once used in a cinema and were found walled up inside a bingo hall. They are each almost three metres wide and sound incredible.’

GO FOR A RECORD WITH A JUKEBOX 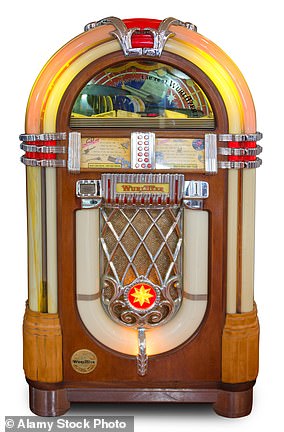 The golden era of the jukebox was in the 1940s and 1950s – and models from this time can command five-figure prices.

The 1946 Wurlitzer 1015, with its rounded top and bubble tubes, is perhaps the most iconic and can sell for £15,000. Although a great looking machine it is not the most practical as this American classic may hold only 24 songs on fast-playing 78rpm records.

Subsequent models, such as the 1980s Wurlitzer Carillon, can still sell for more than £1,000 because of their solid build and iconic name. But there are other highly sought-after machines available. These include the 1958 Seeburg 201 Select-O-Matic that can trade for more than £8,000.

Another is the Seeburg 161, with its Cadillac-style chrome bumper and fins, that can sell for as much as £12,000.

British copycats include a 1950s BALAMi. In July this year, a BAL-AMi ‘in very poor condition and in need of complete restoration’ sold for £3,400, far exceeding the £500 estimate.

Jukeboxes get their name from ‘juke joints’. These were black dancing clubs held in the American Deep South that attracted revellers in the early 20th Century.

Earlier this summer, a Tannoy speaker from the 1950s went under the hammer for £8,000 – smashing the £40 valuation put on it by Dorchester-based Duke’s Avenue Auctions.

It was a 1959 ‘Guy R Fountain’ with extra-large 15-inch loudspeakers and it was housed in a ‘Canterbury’ wooden corner cabinet that sat more than 4ft high.

Tannoy is a common term used for a speaker as it is associated with some of the best quality speakers.

Amplifiers that use valves rather than transistors and electronic chips are also sought after by hi-fi fans. Besley says a 1948 Leak TL12.1 – a mono amp – can sell for £2,000, but you need two for a stereo system. Other separates that can be plugged into modern hi-fi include a cassette deck.

Although cassettes fell out of favour in the 1990s, music fans still have many collecting dust, while bands still occasionally release music on cassettes as limited editions. A classic cassette deck is the 1982 Nakamichi Dragon, with the best examples selling for at least £2,000.

Hi-fi was born in 1877 when Thomas Edison invented the phonograph – an early record player using cylinders rather than a flat disc. By 1898, Edison was selling a New Standard Phonograph for £15. The cylinder was limited to a twominute playing time. It can now sell for £1,350.

These play the fast spinning 78rpm records that can still be picked up cheaply second-hand. Find an 1893 Berliner Gramophone and you have a music machine that ages well. They can change hands for about £10,000.

The Berliner Gramophone company adopted His Master’s Voice as a trademark after Berliner saw an 1898 painting of a dog sitting on a coffin listening to his dead owner’s voice through a record player.

It was used on a Trade-Mark gramophone model in 1901 that now sells for £2,000. These early machines did not have electric-powered amps to make them louder – but relied on horns.

Such external horned gramophones reached their peak in the 1930s when the British firm EMG created papier-mache horns up to 34 inches in diameter.

Models such as the EMG Xb Oversize can sell for £3,800 – with values high not just due to rarity but the quality of sound.