Most people avoid skunks like the plague, but researchers at Chicago’s Field Museum have discovered three new kinds of spotted skunks, almost doubling the number of known species from four to seven.

Unlike their striped cousins, spotted skunks hop into a handstand before blasting their target with a sickening stench.

They also avoid populated areas, so to get the hundreds of specimens needed for in-depth genetic analysis, the scientists literally had to hang up wanted posters for locals to turn in trapped critters and roadkill.

‘People recognize spotted skunks as something special, because you don’t see them every day,’ Adam Ferguson, small carnivore expert at Chicago’s Field Museum, said in a statement.

‘They’re not the kind of roadkill that people just paint over.’

Researchers at Chicago’s Field Museum have classified three new species of spotted skunks, which are known to jump into a handstand before spraying potential threats

While they’re omnivores— dining on insects, rats, mice, grubs, grapes, fruit, and corn—they are part of the Carnivora order of mammals that includes raccoons, otters and weasels.

Spotted skunks, also known as hydrophobia cats and civet cats, can be found across North America, but they haven’t invaded cities like the striped variety, so less is known about them.

There’s one trait that’s quite unmistakable: when threatened, spotted skunk hop on their front legs as an extra warning before spraying. 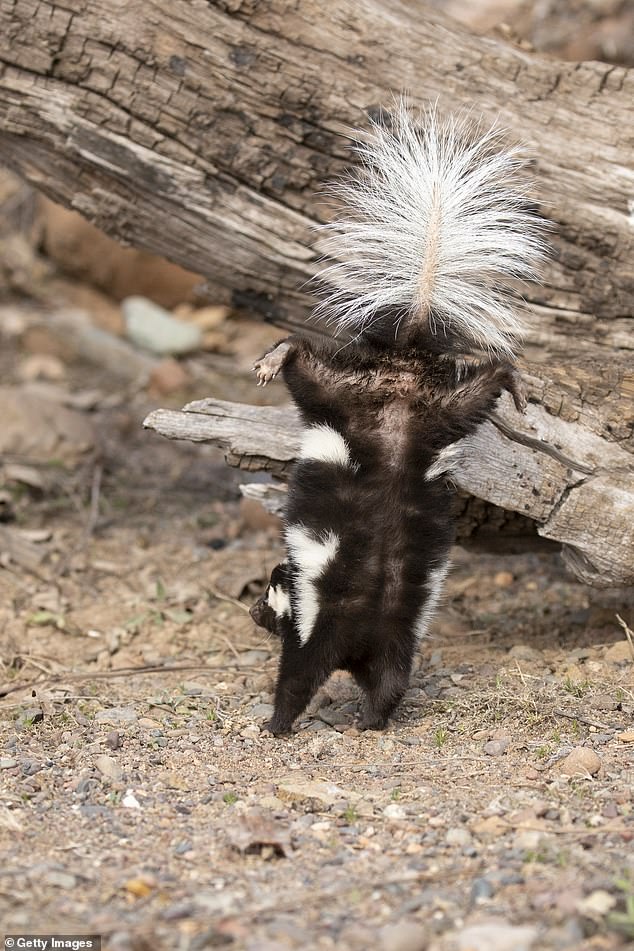 The spotted skunk is far smaller than its striped counterpart and remains in remote areas, making classification difficult. Pictured: An Eastern Spotted Skunk taken in Minnesota preparing to spray

‘I call them the acrobats of the skunk world because they’re really good climbers [and] they can do the handstand,’ Ferguson, co-author of a new paper on the animal in the journal Molecular Phylogenetics and Evolution, told Popular Science.

The spotted skunk’s gymnastic ability may be aided by its compact size.

Studies show city-dwelling mammals tend to be beefier than their country counterparts and spotted skunks typically weigh under two pounds.

That’s compared to the striped variety, which can hit 10 or 12 pounds.

The first spotted skunks were formally recognized in 1758 by famed Swedish biologist Carl Linnaeus, the father of modern taxonomy. 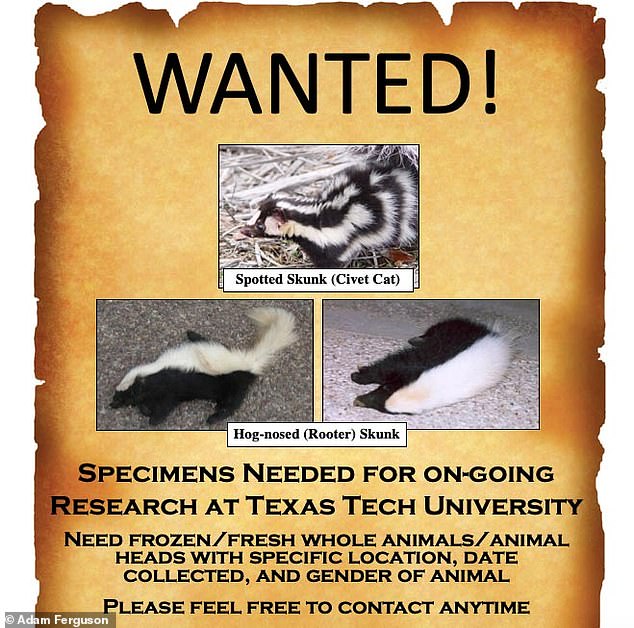 Biologists with Chicago’s Field Museum posted Old West-style wanted posters in Texas, asking residents to submit specimens of spotted skunks they may have found in traps or as roadkill

Since then, the number of individual species has soared to 14 before being pared back down to four in more recent decades—the western, eastern, southern and pygmy spotted skunk.

The species are generally differentiated by their size and the pattern of their white markings, which are really broken stripes rather than true spots.

Because there are poor genetic data on isolated populations, Ferguson theorized that number was too conservative. 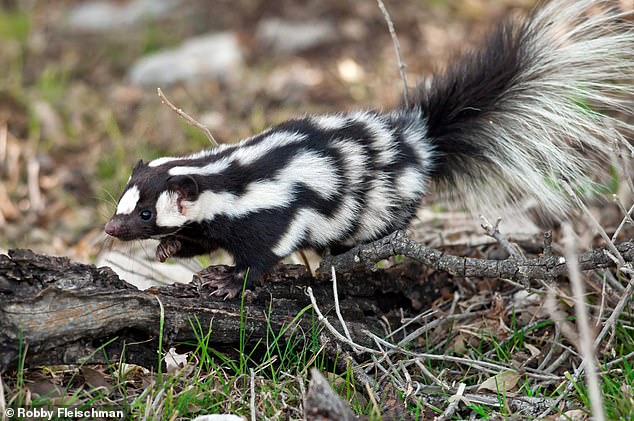 Able to conduct genetic analysis on 200 specimens, the researchers were able to differentiate three new species including the squirrel-sized Yucatan spotted skunk and the Plains spotted skunk

‘We figured there had to be some surprises when it came to spotted skunk diversity,’ Ferguson said in a statement, ‘because the genus as a whole had never been properly analyzed using genetic data.’

But how to get a robust number of specimens of an animal no one wants to get near?

Ferguson and his colleagues made Old West-style wanted posters and distributed them across Texas, hoping to capture the attention of residents who trapped or killed the acrobatic creatures or found them as roadkill.

Announcing they were looking for both spotted skunks and hog-nosed rooster skunks, the researchers asked for ‘frozen/fresh whole animals [or] animal heads with specific location, date collected and gender of the animal.’

Ferguson, who worked on the project while pursuing his Masters of Science at Angelo State University in Texas, also looked at skunks in museum collections.

‘If we’re trying to tell the full story of skunk evolution we need as many samples as we can,’ he said.

‘For example, we didn’t have any modern tissues from Central America or the Yucatan. We were able to use museum collections to fill those holes.’

In all, they garnered 200 DNA samples, ranging from British Columbia to Costa Rica, according to The New York Times. 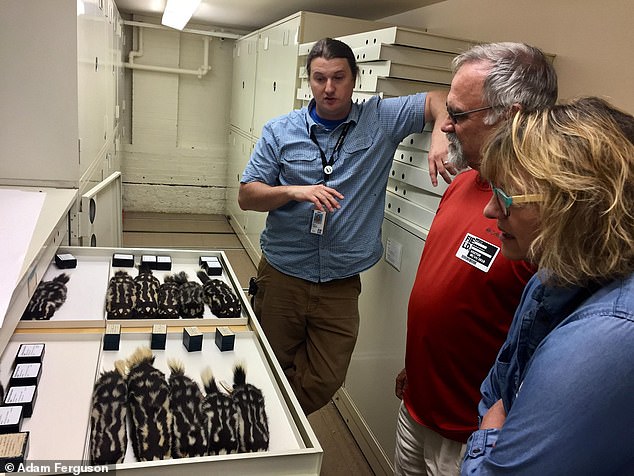 That led them to reclassify some, resurrecting species names that haven’t been used in centuries.

‘I was able to extract DNA from century-old museum samples and it was really exciting to see who those individuals were related to,” says primary author Molly McDonough, a biology professor at Chicago State University.

‘It turns out that one of those was a currently unrecognized, endemic species in the Yucatan.’

Most of the spotted skunk species could be divided into two groups, or clades, the Times reported, three from the eastern US and three from the west, with the Yucatan-based  species as an outlier.

The revised taxonomy also opens a window into a unique aspect of some spotted skunks’ reproductive cycle: Delayed egg implantation.

Western species breed in the fall, and actual gestation takes only takes about 33 days, but instead of attaching to the uterus right away, the egg ‘sits in suspension for a while,’ with offspring arriving in the spring, Ferguson said.

As a result you could have two species in the same place that appear identical but can’t breed because their reproductive strategies are incompatible, the Times reported.

‘We want to know why some species have delayed implantation and others don’t, and figuring out how these different species of skunks evolved can help us do that,’ Ferguson said.

The report will also aid conservationists, he said: the Plains spotted skunk has been in decline for 100 years and identifying it as a distinct species may help get it listed as an endangered animal.

‘If a subspecies is in trouble, there’s sometimes less emphasis on protecting it because it’s not as distinct an evolutionary lineage as a species,’ Ferguson said.

‘We’ve shown that the Plains spotted skunks are distinct at the species level, which means they’ve been evolving independently of the other skunks for a long time. Once something has a species name, it’s easier to conserve and protect.’

The species’ divergences occurred during the Ice Age some 5 million years ago, the report indicated, and was fueled by adaptations to climate change.

Further research into their lineage could be helpful in protecting the skunks and other animals in the future, Ferguson said.