Sue Macpherson initially thought her sore throat was nothing more than a bout of tonsillitis, and her GP seemed to agree.

‘I had a swollen throat, a scratchy voice and just generally felt under the weather,’ says Sue, 48, a team leader at The Job Centre in Oldbury, West Midlands.

‘I went to the doctors, who confirmed it was tonsillitis, and prescribed antibiotics but the swelling just wouldn’t go down.’

A couple of months after going to her GP, in September 2015, Sue still felt unwell.

‘It wasn’t just a sore throat I felt generally run down all the time,’ she recalls.

But when she was on holiday in Florida later that year with her husband Andy, 49, it became clear that something really wasn’t right.

Sue Macpherson, 48, a team leader at The Job Centre in Oldbury, West Midlands, was diagnosed with tonsil cancer on New Year’s Eve in 2015

‘It was so bad that I could barely swallow and had to go and see a doctor but they insisted it was a viral infection,’ she says.

‘However, for the whole two-week holiday I had no energy to do anything — everyone else was out having fun while I had to stay in bed for most of the trip.

‘Then, when I got back, a small lump appeared in my throat, which I could feel on the outside of my neck, on the right side.

‘That’s when I knew it must be something more serious.’

Back in the UK, Sue went to her GP who, assured her she had recurring tonsillitis, but referred her to the ear, nose and throat (ENT) clinic to find out why it might be happening.

Three weeks later Sue was at the ENT clinic with a camera down her throat.

‘Even though the camera didn’t show anything, they sent me for a CT scan and biopsy just in case,’ she says.

And on December 31, 2015, just hours before the New Year, Sue was told the lump in her throat was not tonsillitis, but a tumour.

‘When I walked into the room to get my results I knew it was more than just tonsillitis — there were eight people in the room including an oncologist,’ says Sue.

‘When my doctor said the words “tonsil cancer” I couldn’t believe it. I gripped Andy’s hand and started to tremble.

‘The experts were all speaking to me about what would happen next, but it all seemed like a bit of a haze.

‘A new year was supposed to be about new beginnings, not awful news like this.

‘Andy and I went to the local pub with friends for a New Year’s Eve party — I tried to put on a brave face but everyone kept saying: “Is Sue okay?” to Andy.

‘It wasn’t quite the celebratory night we’d wanted it to be.’

It is not unusual to initially mistake tonsil cancer for tonsillitis.

Typical symptoms of the cancer include sores at the back of the mouth that don’t heal, persistent pain or discomfort in the mouth or throat, difficulty swallowing, or a lump in the neck — which are similar but subtly different from tonsillitis, explains Professor Antony Narula, a consultant ENT surgeon and past president of ENT UK.

‘Symptoms of tonsillitis and tonsil cancer can be quite similar, but you’re likely to be more feverish with tonsillitis,’ he says.

‘Tonsil cancer would also mean you have a grumbling constant sore throat, that won’t go away — even after antibiotics,’ says P rofessor Narula.

‘The key red flags that it could be cancer are lumps on the throat, which you can feel when swallowing, as these could be tumours growing on the tonsils.’

Jessica Kirby, Cancer Research UK’s senior health information manager says other signs include an ulcer or sore on your tongue that takes longer to heal than it would normally, a lump on your lip or in your mouth and red or white patches in your mouth.

Although not common, around 1,500 people are diagnosed with tonsil cancer in the UK every year. 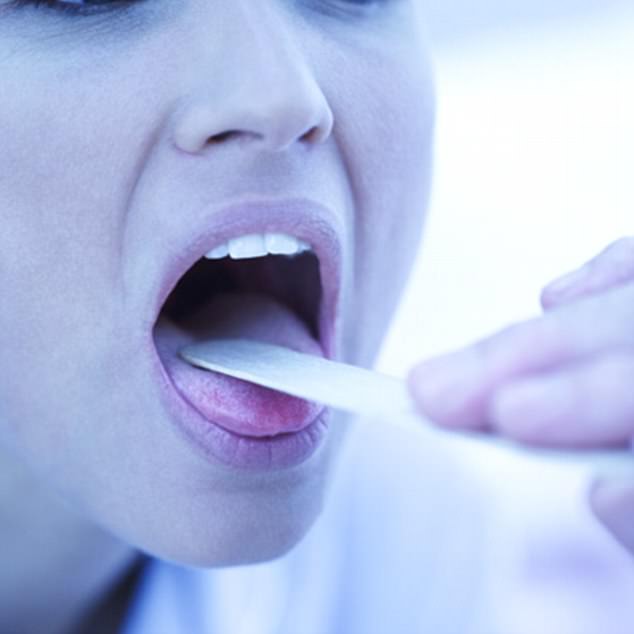 Typical symptoms of tonsil cancer include sores at the back of the mouth that don’t heal, persistent pain or discomfort in the mouth or throat, difficulty swallowing, or a lump in the neck

Statistics from Cancer Research UK show rates of oral cancer which includes tonsil cancer as well as cancer of the lips, tongue, gums, palate, and the middle part of the throat ( oropharynx) have jumped by 68 per cent in the past 20 years.

The rise is due to lifestyle factors such as smoking and regularly drinking alcohol; oral infections with the human papillomavirus (HPV) also play a part.

The HPV virus can infect the skin and the moist membranes of the body, including the cervix and throat.

A healthy diet and moderating alcohol consumption can help cut the risk, as can the HPV vaccination, which is available now for young girls, but not boys.

Regular check-ups with a dentist are also important.

Dr Imran Rangzeb, a dentist at Townhall Dental in Leeds, says: ‘We’ll do a complete check of the mouth, looking for ulcers under the tongue or any changes in colours inside the mouth — especially whiteish spots.’

Sue had a tonsillectomy in January 2016.

Often this is all the treatment needed, but unfortunately doctors found the cancer had spread to her lymph nodes.

As a result, in March that year she started weekly chemotherapy for six weeks, then six weeks of intense daily radiotherapy treatment.

It left Sue feeling extremely ill: ‘I was completely washed out and sick for days after each session, and it got progressively worse as the weeks went on.

‘I couldn’t eat, sleep or even talk at one point — I had to text my husband to ask him to do things for me. Like get me a cup of coffee, even if he was just across the other side of the room.’ 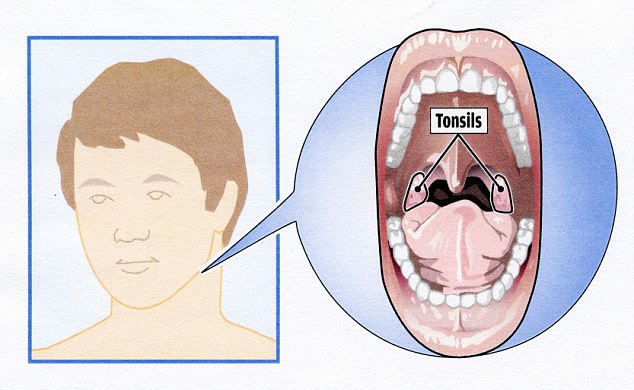 Sue had a tonsillectomy in January 2016 – but doctors discovered the cancer had spread to her lymph nodes. She is now cancer-free

For months after her treatment finished her throat was still so sore she lived on milkshakes.

Weighing 16st 7lb before treatment, she shed 6st — which sat well on her 5ft 5in frame.

‘Thankfully I had the weight to lose, and feel much healthier for it now — but I wouldn’t recommend cancer as a way to shed the pounds.’

While she tried to stay positive throughout the treatment, Sue admits that: ‘Some days I would sit there and think “why me?”.

‘But once my treatment finished I pushed myself to get out of the house — even just to take the dog for a walk.’

In August 2016, Sue was given the good news: the treatment seemed to have worked, but she needed check-ups every eight weeks for a year afterwards and now has them every 12 weeks.

HOW TO SPOT THE DIFFERENCE

Tonsillitis is when the tonsils become inflamed, by a viral or bacterial infection.

Symptoms include a sore throat; pain when swallowing; a hoarse or no voice; fever and cough.

Tonsil cancer can cause similar symptoms — a constant sore throat and sores at the back of the mouth that don’t heal.

It also causes persistent pain and white spots in the mouth — and crucially, a lump in the neck you can feel when swallowing.

Thankfully, Sue’s voice returned in June 2016 and within a month she returned to part-time work.

However, the damage done to her throat by the radiation treatment means some foods are still off limits to her.

‘I used to love a good curry and a daily chocolate bar — but doctors have told me I can’t have either now,’ she says.

‘Because of the radiation treatment my throat just isn’t the same. They just don’t taste the same and will burn the back of my throat.

‘I’ve been told my saliva glands, which were damaged by the radiation treatment may never go back to normal, meaning I always have an extremely dry mouth, but it’s a small price to pay for being cancer-free.’

Sue will be eternally grateful that she pushed for extra tests.

Had she waited any longer her cancer could have spread further.

‘I still have off days where I feel exhausted, but I’ve learnt to know my limitations and take a rest if I need one, but I know I’m very lucky to be in such good health.

‘If I hadn’t pushed for more tests there is every chance I might not be here now — and all because of something that started on my tonsils.’