Marcos Rojo hopes to come back and revive his Manchester United career after his loan spell at Estudiantes, says manager Ole Gunnar Solskjaer.

Rojo returned to Argentina earlier this week in search of first-team football as he looks to cement a place at the Copa America which is being co-hosted in his homeland and Colombia this summer.

The defender will be 30 in March but still has another 18 months left on his contract, with the option to extend by another year, and Solskjaer has not ruled out a return to United next season.

‘He wants to come back a fitter and better player hopefully having played well for Estudiantes and helped Seba (chairman Juan Sebastian Veron) and gone to the Copa America. It was something we had to do,’ said the United boss.

‘Marcos is a lovely lad. He’s got the fire in his belly. He’s a winner and he wasn’t getting enough football. It’s important for him to start playing.

‘He was in the stand away end against Man City and Liverpool. He is such a passionate guy and wants to support this team.’

Ashley Young has also left Old Trafford in the January window to join Inter Milan, but Solskjaer doesn’t see anyone else going before the window closes on Friday night despite speculation over a loan move for young midfielder James Garner.

‘James Garner is going to stay here,’ added Solskjaer. ‘We’ll give him a chance to keep improving. He’s had a bit of a difficult time lately but he’ll be fine.’ 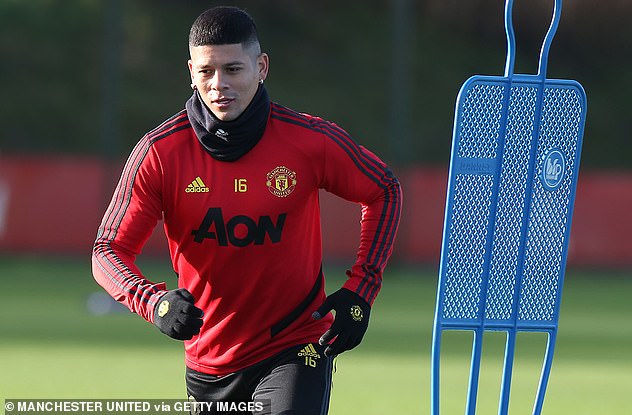