Lori Loughlin’s daughters are choosing to focus on their love for their mom this Mother’s Day.

Olivia Jade Giannulli, Loughlin’s 20-year-old daughter with husband Mossimo Giannulli, posted a duet of sweet throwback photos of herself and Lori, 55, on Sunday, showing the social media influencer as a baby next to her beautiful mother.

‘Happy Mother’s Day to all the mamas out there,’ Olivia began in the caption. ‘Thank you God for mine!!!! You are my best friend and have held my hand every day for 20 years making it look like motherhood is an easy job.’

Focusing on the positive: Olivia Jade Giannulli, Lori Loughlin’s 20-year-old daughter, posted a duet of sweet throwback photos of herself and Lori on Sunday for Mother’s Day

‘You are one of a kind,’ she continued. ‘I love you so so so much & cannot wait to give you all the love in the world today & forever. Thank you for being you. You are the most special person to me.’

‘I am so blessed to be your daughter and so proud to call you mom,’ Olivia Jade added in the effusive post, before concluding with: ‘❤️ I LOVE YOU.’

Olivia’s older sister Isabella Rose, 21, also got into the Mother’s Day celebrations on Sunday, sharing a pair of her own baby photos with their mom.

‘The strength mothers’ have is unparalleled, I think they might be the closest thing we have to superheroes. Happy Mother’s Day Mama, I love you,’ Bella wrote. 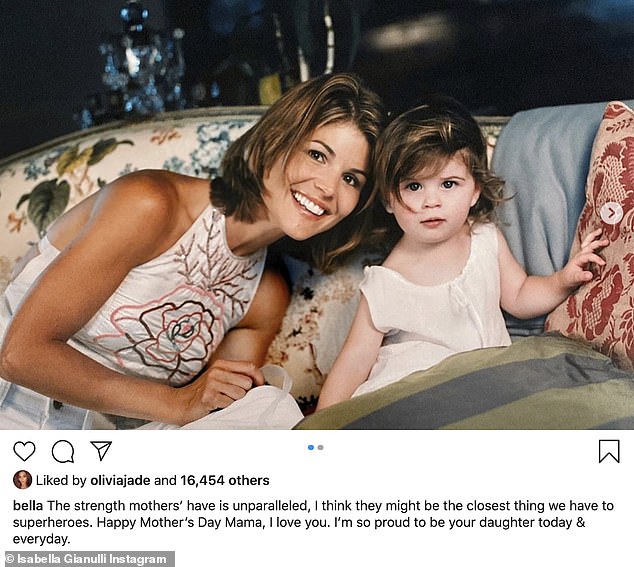 Bella’s turn: Olivia’s older sister Isabella Rose, 21, also got into the Mother’s Day celebrations on Sunday, sharing a pair of her own baby photos with their mom 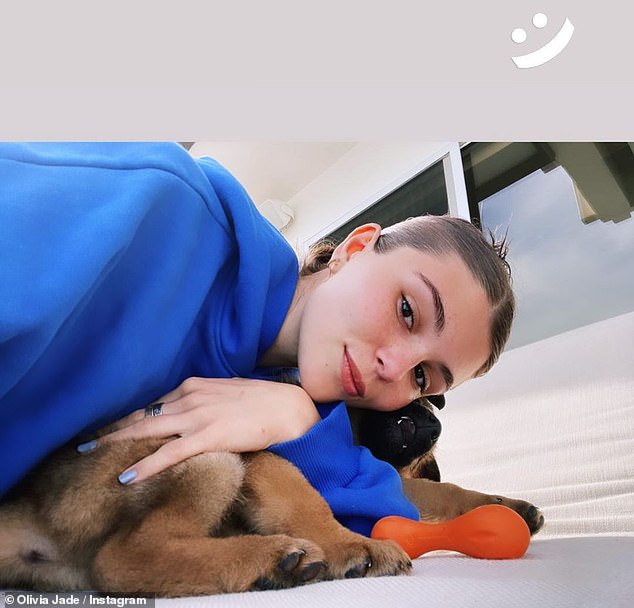 Weathering the storm: Olivia Jade’s sweet wishes come days after a new report claimed that the former Full House star believes that her college admissions scandal could be dropped

‘I’m so proud to be your daughter today & everyday,’ she concluded.

Lori’s daughter’s sweet wishes come two days after US District Judge Nathaniel Gorton rejected a defense bid to toss an indictment charging the parents over allegations of misconduct by FBI agents in their case stemming from the college admissions scandal known as Varsity Blues.

Loughlin and husband Giannulli, 56, are therefore still scheduled to go on trial in October on charges that they allegedly payed Rick Singer $500,000 to get their daughters into the University of Southern California as crew recruits, even though neither girl is a rower.

Up until that point, the former Full House star had believed that her college admissions scandal could be dropped.

In the latest issue of UsWeekly, a source claimed that Loughlin and her husband were ‘more steadfast than ever that they did nothing illegal’ as the trial stemming from their scandal looms over them, where they face up to 45 years in jail if convicted. 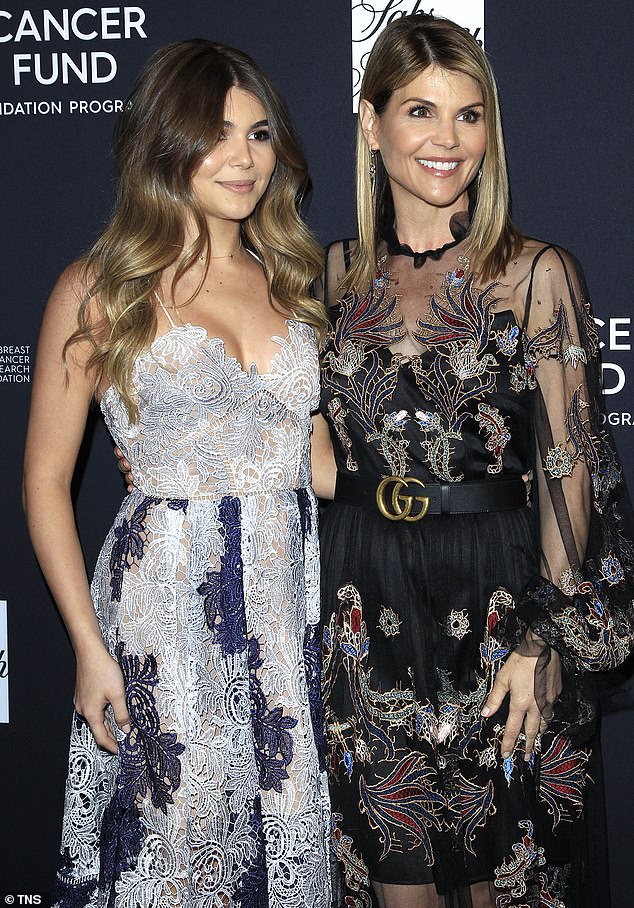 Caught out: Lori is accused of paying Rick Singer $500,000 to get her daughters Bella, 21, and Olivia Jade, 20 (pictured here with her mother in 2018), into University of Southern California 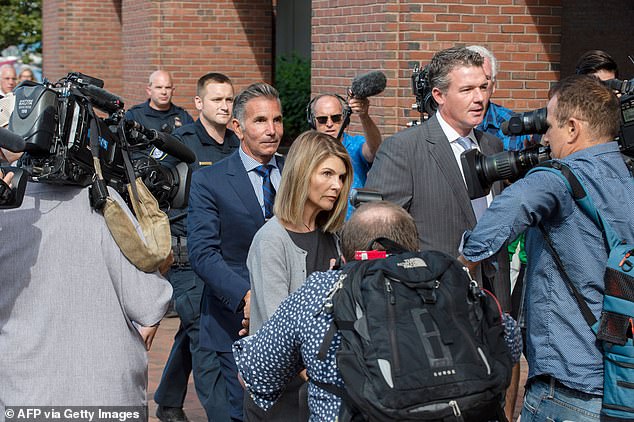 Off the hook? A new report claims Lori  and husband Mossimo Giannulli (pictured at a court house last year) believe they did nothing illegal

Federal prosecutors recently released two ‘staged’ photos showing both Olivia Jade and sister Bella posing on indoor rower machines which they claim is evidence in the case against their parents in the scandal.

Olivia Jade is reportedly ‘really embarrassed’ by the publication of the picture and has been reticent to post too much again on Instagram, as ‘everyone would be shading her’ in the comments section.

However, it has already been stated by Loughlin’s legal team that they are confident about their case. In February, the couple’s attorneys said they had evidence that proves she did not know her college admissions payment was a bribe.

Authorities say the money was funneled through a sham charity operated by college admissions consultant Singer, who has pleaded guilty to orchestrating the scheme.

But lawyers for the actress and her fashion designer husband have accused prosecutors of hiding crucial evidence that could prove the couple’s innocence because it would undermine their case. 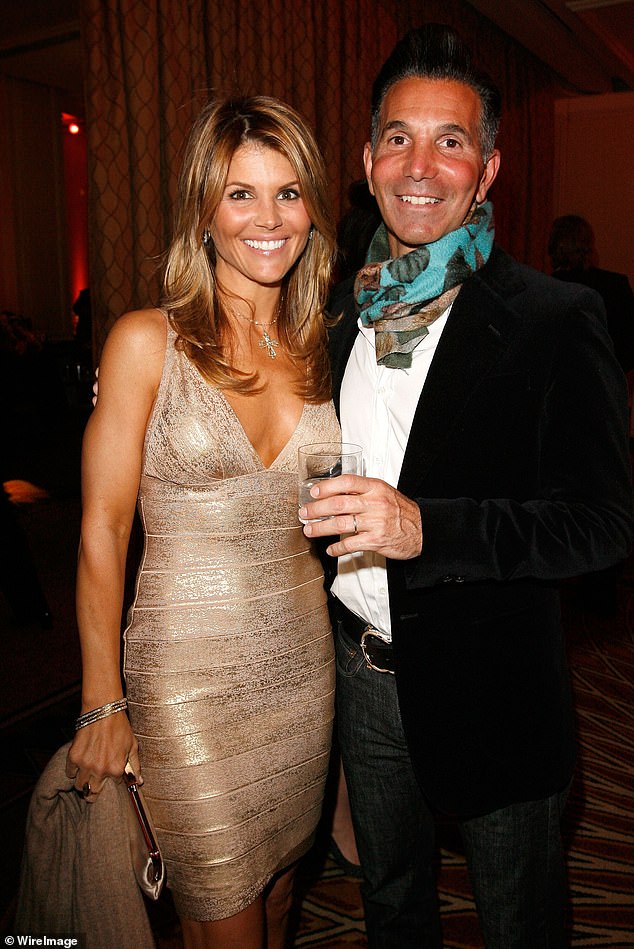 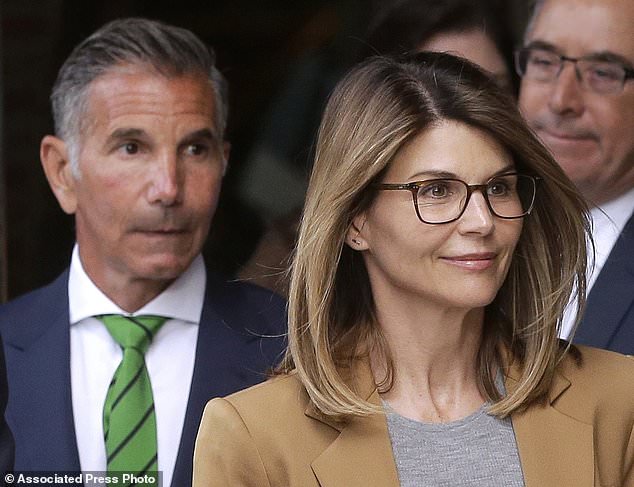 Lawyers for Lori Loughlin, front, and her husband, clothing designer Mossimo Giannulli, said in February that new evidence shows the couple is innocent of charges that they bribed their daughters’ way into the University of Southern California

‘This belated discovery … is devastating to the government’s case and demonstrates that the government has been improperly withholding core exculpatory information, employing a ‘win at all costs’ effort rather than following their obligation to do justice,’ attorney Sean Berkowtiz wrote.

The couple’s attorneys are asking the judge to postpone the setting of the trial date in light of the new evidence, saying ‘it is the only fair way to protect the defendants’ rights.’

Lawyers for Loughlin and Giannulli have argued that the couple believed the payments were ‘legitimate donations’ that would go directly to USC as a fundraising gift or support Singer’s charity.