By Gabriella Ferlita and Aisha Nozari For Mailonline

He underwent surgery on his leg just 11 days ago.

But even a knee injury wasn’t enough to stop Olly Murs from performing at Newbury Racecourse on Saturday.

The superstar, 37, took to the stage in a knee brace for the first time since his emergency hospital visit last week.

What a pro! Olly Murs 37, took to the stage at Newbury Racecourse in a knee brace on Saturday for the first time since his emergency leg surgery last week

Olly looked dashing in a bright blazer and matching slacks co-ord, which he paired with a fresh white T-shirt and matching white pumps.

He put on an energetic display while larking around on stage and singing into the microphone, ensuring to dazzle his fans in the audience.

The Dance With Me Tonight hitmaker also took to Instagram to share a photo in his colourful getup, looking like a trooper as he stood in his knee support.

He captioned the beaming image: ‘Stage ready’ with a slew of fun emojis. 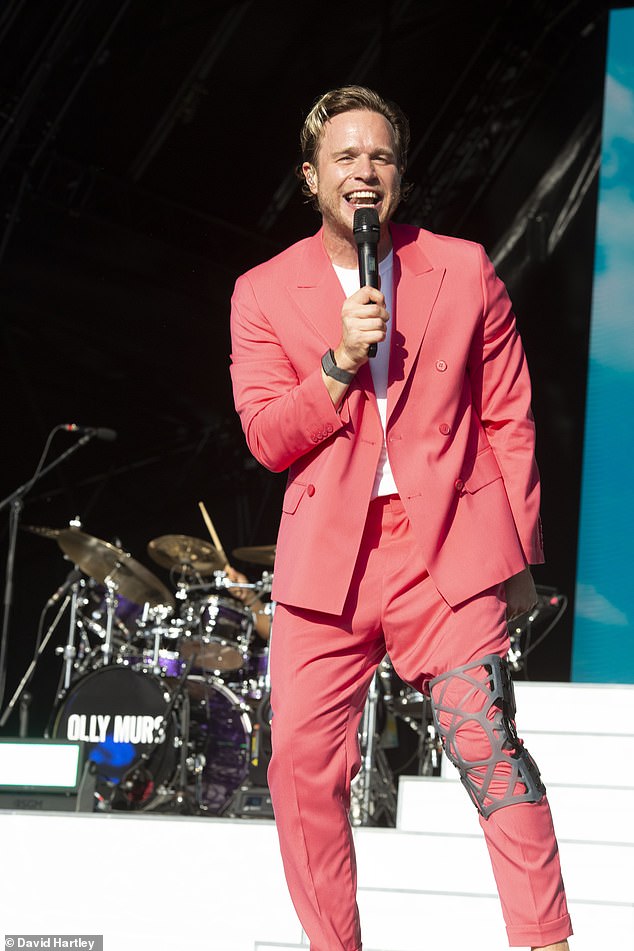 Going for it: The singer pushed through the pain to entertain fans with his hit songs 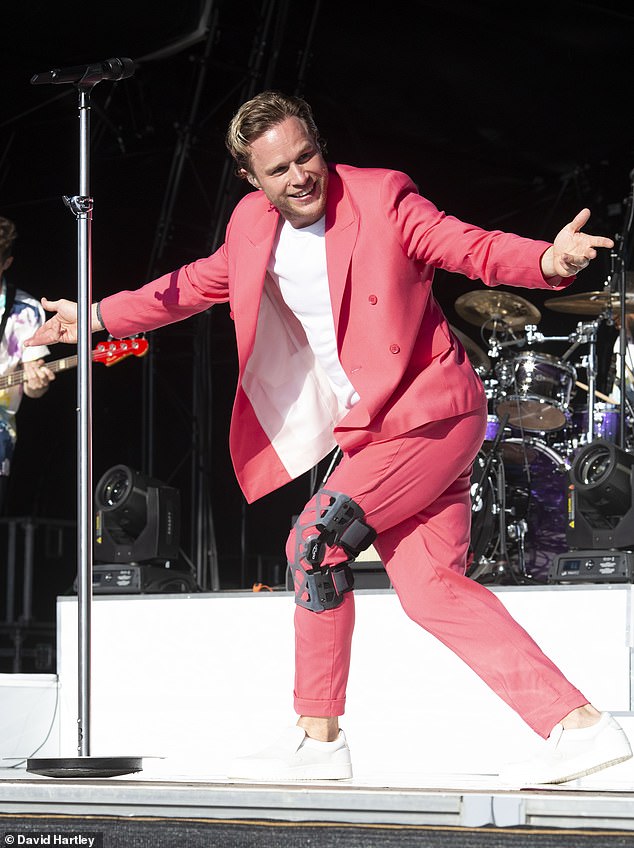 Performer: Olly appeared to be in good spirits while on the stage in his eye-catching coral suit

The performer smiled in the picture despite his recent health challenge, which saw ‘a fragment of bone manag[ing] to lodge itself to the back of my knee’.

Last Tuesday Olly took to Instagram to share his story of the freak accident, telling fans: ‘It’s been a mad 72 hours’, Olly admitted that he initially ‘thought the worst’ after worrying he had ‘done his knee again’.

He also shared a photo of two small bones that had been removed from his knee.

Wearing his hospital gown, the star thanked fans for their support and insisted he will still perform his scheduled shows this month, although his performances may not be as energetic. 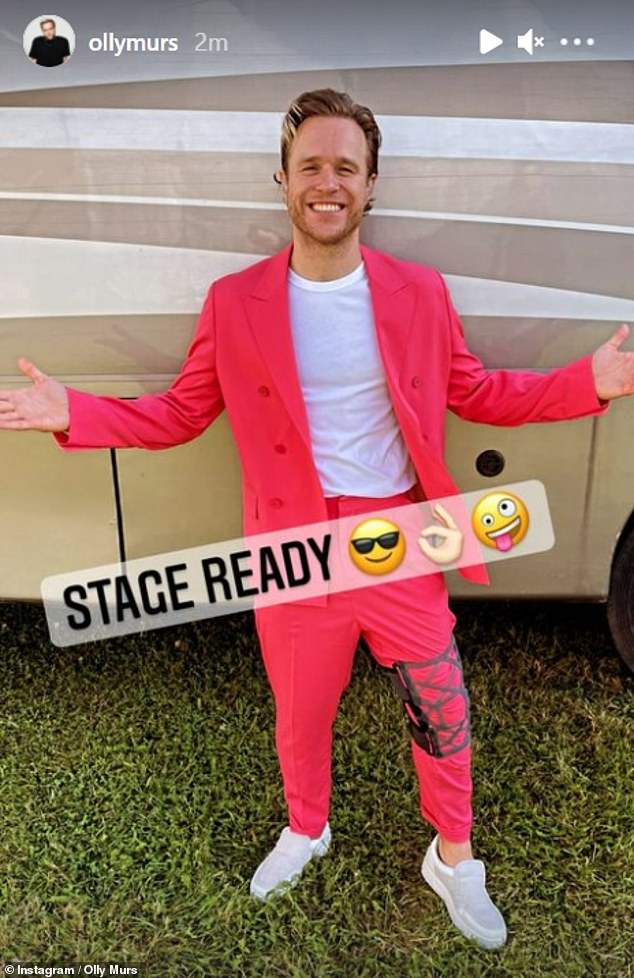 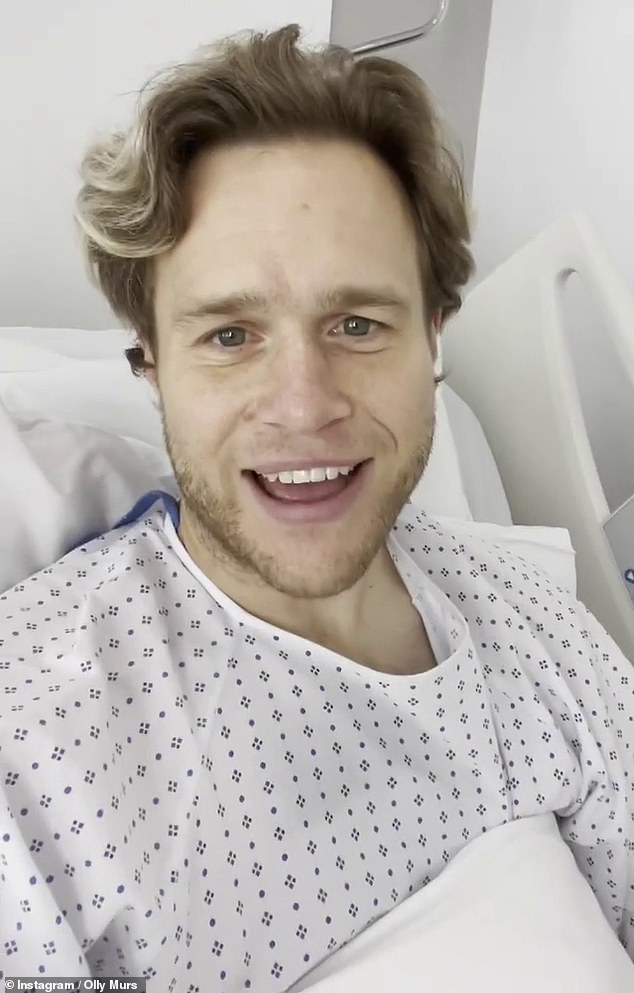 Stage accident: Last Tuesday Olly took to Instagram to share his story of the freak accident, telling fans ‘it’s been a mad 72 hours’

Olly said in full: ‘Hey everyone, what’s happening. You’re probably thinking, what is going on? Why is Olly in a hospital bed? Well, I’ve just had surgery on my left leg, and as you can see, I’ve got my game on already to ice it.

Basically, for some of you who came to my Newmarket gig on Friday, thank you firstly for your kind messages and support and checking I was OK.

‘It’s been a mad 72 hours since the gig getting to this point. Basically, after my second song, a fragment of bone which was in my knee managed to lodge itself to the back of my knee after I jumped and basically shut my leg down.#

‘During the gig, I was just limping the whole time, I couldn’t believe it. So basically I’m in, I’ve had the surgery, I wanted to get this done because I’ve got the Newby gig on the 14th and the Singleton Park on the 15th. 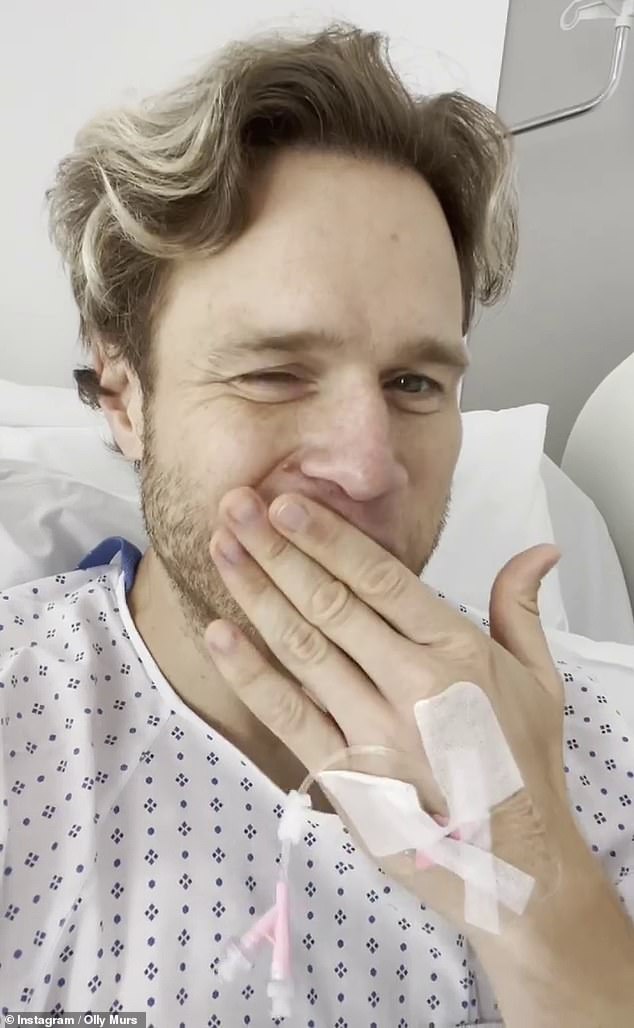 Grateful: The star thanked fans for their support and insisted he will still perform his scheduled shows this month, although his performances may not be as energetic

‘So I wanted to make sure I got this done for you guys. It will be a different gig, I probably won’t be running around like I normally do, there might be a stool for me to sit down on, but I can’t cancel these gigs for you guys.

‘It was such an amazing vibe on Friday at Newmarket so I’ll give it absolutely everything next week for you all.’

Now, Olly took the audience by storm at the racecourse in his first show since the ordeal. 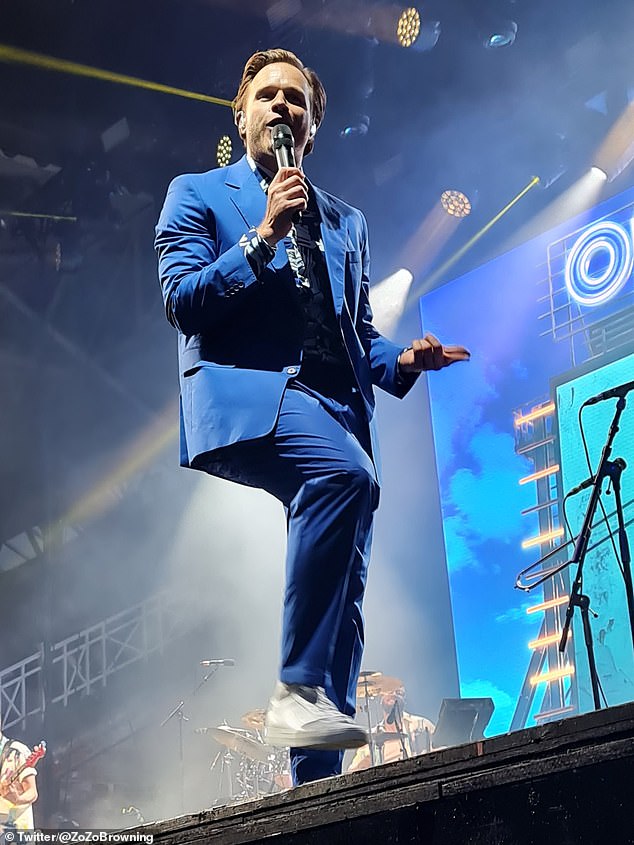 Showtime: Olly took the audience by storm at the racecourse in his first show since the ordeal. Pictured on 3rd August 2021 – the night he injured his leg