Olympic rower Matt Gotrel, who won gold in Rio, talks to ME & MY MONEY

Former Olympic athlete Matt Gotrel says he struggled to make ends meet after winning gold as a rower for Team GB in Rio, 2016.

Gotrel, 32, told Donna Ferguson he ended up teaching schoolboys how to row just to earn enough money to pay for food.

After getting a job as an engineer, he then became a professional sailor, enabling him to return to competitive sport and compete in last year’s America’s Cup.

He was awarded an MBE for services to rowing in 2017 and is an ambassador for MyClubGroup.co.uk – an organisation which helps grassroots sports clubs improve their finances.

Golden boys: Matt Gotrel (circled) with his team-mates at the Rio Olympics in 2016

Would you like to be in Japan competing in the Olympics?

Yes. The Olympics are the pinnacle of sport. Each time I watch it, I get goosebumps. I would be lying to myself if I pretended I didn’t want to be there competing.

At the same time, I feel like I drew a line under what I achieved in Rio 2016 and it was a good time for me to leave rowing. But competing in the Olympics is special and to me it always will be.

Why do you think the rowers performed so poorly in Japan?

It’s been a tough year with Covid. A lot of our rowers have been training alone in their garages. Other European nations were still able to train as a group while we were all locked down.

It’s been hard to watch some of the performances, but to say they did poorly is harsh – a lot of the time, these events come down to very small margins. Fourth place could easily have been a medal on another occasion and some of our medals could have been different colours.

Having said that, you can’t deny that it hasn’t been our best showing ever. There have been a lot of changes in British rowing with head coach Jurgen Grobler leaving and new coaches coming in. There’s been a lot of transition for the team, but hopefully they’ll come back stronger.

That it doesn’t grow on trees and that you need to work hard for it. My parents worked long hours, running their own jewellery business. Money wasn’t tight, but they were frugal. For example, I was always into sports, but I never had the best gear. They would always buy my stuff second-hand.

I’m not frugal myself – I like spending, rather than saving – but I am quite sensible with money and like to plan ahead. 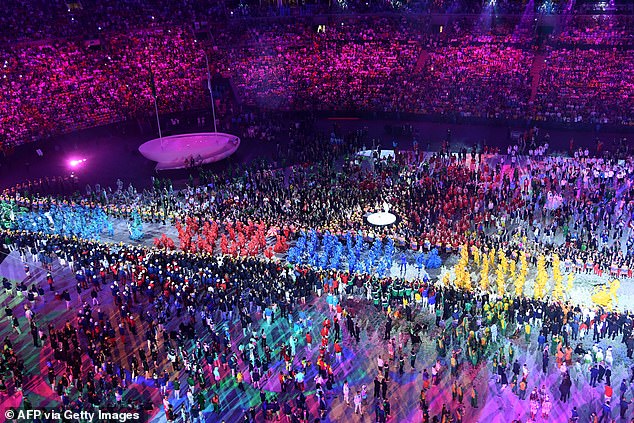 Matt said: ‘Competing in the Olympics is special and to me it always will be’ after winning gold

Yes. The worst time was probably in 2017, after I had won Olympic gold in the Men’s Eight rowing event at Rio.

I decided to retire and not go back to rowing. There was a period where I had no real idea what I was going to do for a living or where my income was going to come from.

That was a tough time. I ended up freeloading a little bit – I moved in with my girlfriend and didn’t contribute towards the cost of our accommodation. I was coaching local schoolboys at a rowing club, just so I could earn enough to eat and pay for food.

After about three months, I’d had enough. I still didn’t know what I wanted to do – but it got to the point that I felt I had to get a job and pay my own way. I fell back on my engineering degree and went to Rolls-Royce to work as an engineer.

That wasn’t a job I consciously wanted to do, or a route I would have gone down if I hadn’t been having these financial issues.

It was all a bit of a comedown after Rio. I felt a bit lost. Everything in my life had been leading up to that gold medal in Rio. Then, after that moment, it was hard to figure out what my purpose was, what I was going to do with my life. It took a while to adjust and come to terms with that.

How did you turn your fortunes around?

An old sailing contact got in touch and asked if I’d like to go sailing again as part of a professional team. I had sailed as a kid, but then started rowing at Loughborough University.

So, after I’d worked at Rolls-Royce for a year, I was able to go and be an athlete again. I think being fit and having the discipline of a rower helped me succeed as a sailor.

Being part of a team, aiming for one goal, is what I am used to. It felt natural to be back doing sport again. It’s the environment where I am happiest.

My finances improved when I joined the sailing team. Like Formula 1 and cycling, you get big sponsors in the professional world of sailing, whereas rowing is an amateur sport.

As a rower, the maximum grant you can get is £28,000 a year tax-free and even that is based on your performance. As a sailor, you can earn a six-figure sum.

Yes, because I do quite a lot of motivational talks. I can earn up to £2,000 for a half-hour speech. I talk about my journey and the things I’ve learned. I also talk about goal setting.

How, as an athlete, you have to just look one step ahead and focus on the job you have to do the next day, rather than the deadline you have in a month’s time.

The last tax year ending April 5. I was sailing in the 36th America’s Cup for Ineos Team UK. I’d rather not say how much I earned, but it was more than I made when I was rowing.

The most expensive thing you ever bought for fun?

An artwork for £2,000. I’d describe it as an abstract seascape with blues and greens and bits of wood. I have no idea who the artist is – my wife and I just liked it.

Racking up debt on a couple of credit cards after Rio. I ran up about £4,000 and it took me a couple of years to clear it.

Taking the advice of a financial adviser. While I was a rower, I had quite a lot of disposable income because I hardly spent anything. I trained for six hours every day, even at weekends, and lived in cheap shared accommodation with five other rowers.

Since all I did for years was train, eat and sleep, there was no time to spend.

The adviser helped me start a pension at age 24 and invest through an Isa. By the time I was 29, my Isa had increased in value by about 20 per cent.

We now live in a four-bedroom house, just outside Cheltenham, which we bought just before the pandemic.

Going skiing. I wasn’t allowed to ski when I was rowing because of the injury threat. So I missed out on about seven winters. Now, I try to go once a year if I can afford it. My favourite place is Morzine in France. It typically costs £2,000 including flights.

I would introduce an incentive to homeowners to encourage them to sell to first-time buyers, not buy-to-let landlords. I’d give the seller a one per cent stamp duty cut on their next property purchase if they did that.

Yes, I do sporadically. And I always play the National Lottery because I’ve been on the receiving end of its funding. They support some great causes and do amazing work for sport in our country – from grassroots to Olympic level.

To look after my family. My wife recently gave birth to our daughter, Lara. I want to make sure I can always provide for them both.