Sifan Hassan of Holland wins women’s 5,000 metres gold as she bids for unprecedented treble with 1,500m and 10,000m races to come

Holland’s Sifan Hassan unleashed her sizzling pace in the final lap to win the women’s 5,000 metres gold medal on Monday and kick off her bid for an unprecedented Olympic treble.

Her dream looked under threat during Monday’s morning session when she fell in her 1,500m heat at the start of the final lap.

Sian Hassan of Holland celebrates after securing gold in the women’s 5,000 metres

‘I can’t believe it,’ she told reporters after completing her win on a slightly wet track following heavy rain.

‘I used all my energy this morning and I was kind of tired. I couldn’t believe what happened. It was terrible when I tripped.

‘I felt terrible afterwards and I never thought I am going to be Olympic champion.’

She recovered brilliantly, however, and almost sprinted to win her heat and advance to the semi-finals.

In the evening, she bided her time until the final lap and then showed the same pace to speed away from the leading pack and take victory in 14:36.79. 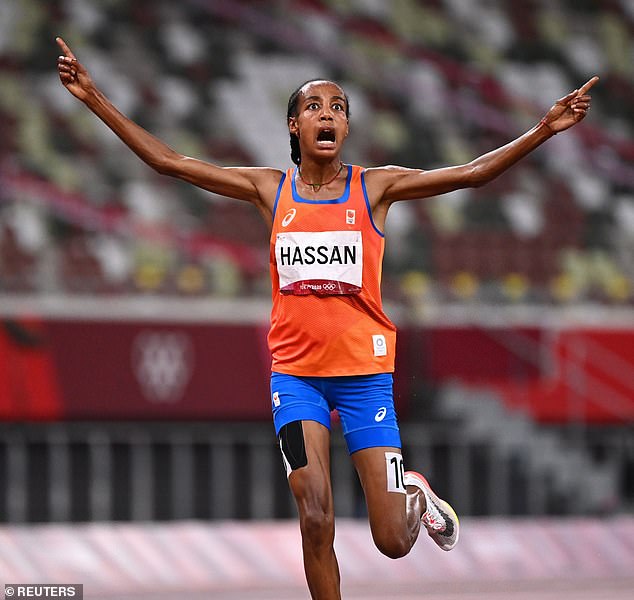 ‘It has been an amazing day. When I fell down and had to jump up I felt like I was using so much energy. I couldn’t believe the feelings in my legs. All the energy seemed to leave me,’ she said.

‘Before the race here I didn’t even care. I was so tired. Without coffee I would never be Olympic champion. I needed all the caffeine. I was so scared I wasn’t going to do it.’ 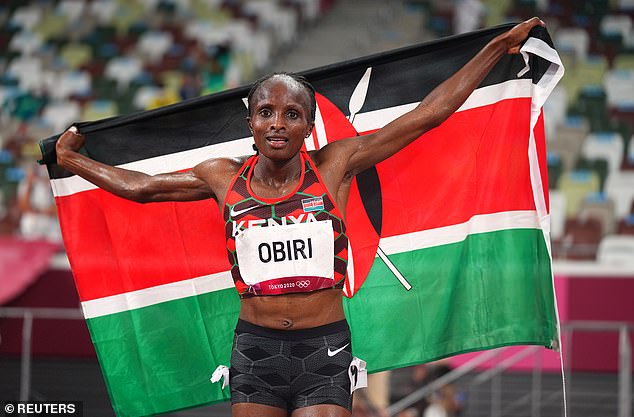 Kenya’s Hellen Obiri, a double world champion and Olympic silver medallist five years ago in Rio, had to be satisfied with another silver as she finished in 14:38.36.

Ethiopian Gudaf Tsegay went into the race as the world leader with her personal best 14:13.32 that she clocked to win the Ethiopian trials in June.

She could only stay close to Obiri as Hassan sped away, however, and ended with the bronze medal.