Life has been an emotional rollercoaster over the past few weeks, and I have been particularly prone to lachrymose outbursts, but after we finally laid Mum to rest on Monday, I thought I was holding things together pretty well. Then the following happened.

A beaten-up caravan has been fly-tipped in the lane down from where we live, causing a temporary bottleneck. Not so much of a problem for me, as I love letting people through. I can’t get enough of it. I think I may actually be the first ever let-people-through/in addict. 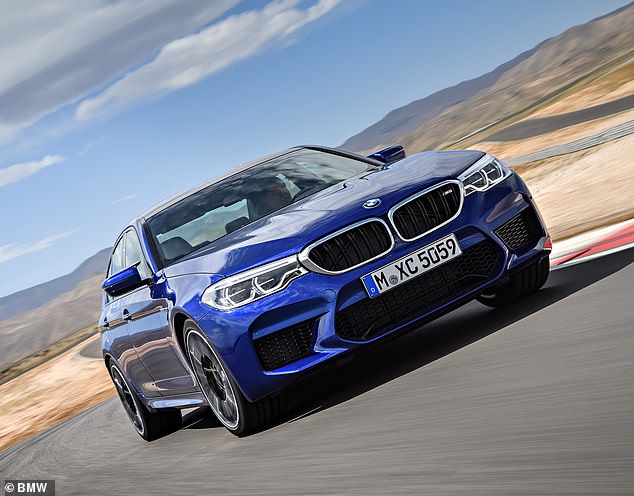 Put simply, this is an awesome bit of kit. I’m even beginning to get my head around the fact it might actually be worth the £102k the invoice for our test car topped out at

So there I was, approaching the sad carcass of someone’s former pride and joy, when I spied three oncoming cars. I could easily have nipped by first but I literally couldn’t wait to stop and flash the convoy through. All fine then, all good. Except after a hat-trick of grateful thank yous, a nod, a wave and a smile, in that order, I spontaneously burst into floods of tears.

What a plonker. I can only conclude this spontaneous exchange of good will served as yet another emotional trigger, a metaphor if you like, for all the love and support my family and I have received since Mum passed away. Everyone has been so damn nice. I mean, extraordinarily nice.

Sobbing like a baby, however, is not exactly the textbook look for a poser behind the wheel of the balls-out new BMW M5 killing machine. Which is the very vehicle I happened to be in at the time. Oops.

M-agnificent! M-azing! M-ammoth! M-ega! M-believable! That’s five Ms for starters. In fact, let’s dispense with any cod nonsense and declare this car an absolute superstar from the get-go. In which case, the 5 in M5 can also now refer to the number of stars at the top of the page. Put simply, this is an awesome bit of kit. I’m even beginning to get my head around the fact it might actually be worth the £102k the invoice for our test car topped out at. What follows, therefore, is a celebration of what is, as opposed to a desperate exercise in nit-picking as to what isn’t. 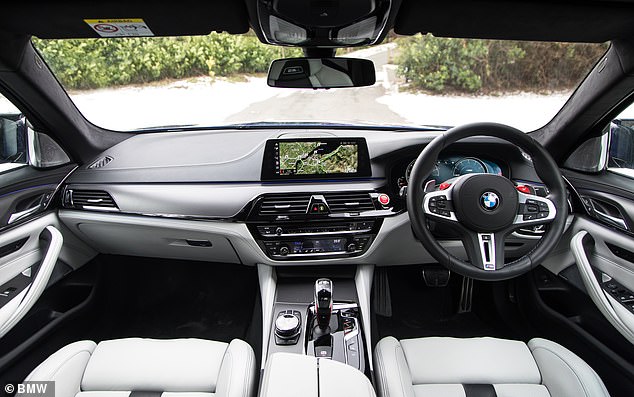 When it comes to agility – and don’t forget we’re talking about a sizeable lump here – it handles way better than almost anything similar. Albeit via a palpably firm ride

The first thing I liked about this majestic weapon is the fact that it doesn’t feel the need to be quite as lairy as the M2, M3 or M4. Don’t get me wrong, it’s no shrinking violet. Maybe it just looks less flashy than it really is because of the understated Marina Bay Blue paint job, which was absolutely stunning. But often, less is more when it comes to the battle of the power bulges and I can’t help thinking that is what’s going on here. The overall look is one that purrs subtlety and sleekness rather than anarchy street fighter, yet with enough passive aggression to suggest potential menace and mayhem. I particularly like the fact that the bonnet sculpting has been pared down to just two sharp-edged fins instead of the usual verbose signature M series love handles. The more simple, the more confident. The more you have to shout about, the less you have to shout.

That said, firing up the monster 4.4-litre 600hp V8 any time before sunrise is a surefire way of finding out how much your neighbours love you. This is not a quiet car, in any of its four driving modes, but Sport or Sport+ is where the roars are at their most offensive rawest. Add to this dramatic spitting, popping and crackling on deceleration and that should be more than enough to test the resolve of even the most tolerant of innocent bystanders.

Once you’ve made it out of your local postcode, if you do happen to find a road that’s long enough and desolate enough to unleash even half of the M5’s potential fury, you will not be disappointed. Except, that is, if you lose concentration and the revs hit the limiter, which is a) very easy to do b) really embarrassing and c) really quite uncomfortable. In fact, this M5 is actually smoother (and more fun) to drive in automatic mode rather than paddle-shift. Not that this is a cop-out. It’s still ludicrously stimulating, guaranteed to make your brain fizz and your bum tingle. 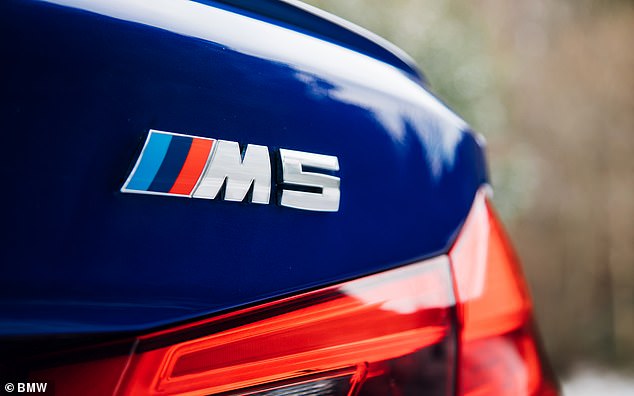 Firing up the monster 4.4-litre 600hp V8 any time before sunrise is a surefire way of finding out how much your neighbours love you

With such power, then, how much do we need to fear stacking it into the nearest ditch? Answer: not a lot, unless you’re really low on talent. The xDrive four-wheel-drive system simply won’t allow such shenanigans. A tanker of superglue couldn’t provide more adhesion.

What goes up must come down, of course, so with a 0-60mph time of 3.4 seconds and a kerb weight of nearly two tons, the optional (gold!) carbon ceramic brakes are a very sensible extra. Yes, they cost more than a brand new Dacia Duster, but if you can afford the £7.5k you’ll need to stump up, why wouldn’t you? It’s probably a lot less than a potential bill for recovering your ex-M5 from a lamppost.

When it comes to agility – and don’t forget we’re talking about a sizeable lump here – it handles way better than almost anything similar. Albeit via a palpably firm ride.

Now, about that price tag.

This car reminds me of the Mercedes-AMG GT R Coupé I completely fell in love with last year, all £150k+ of it. ‘Entirely reasonable, a relative bargain compared with the stratospheric prices of Ferraris, Bentleys and the rest,’ I seem to remember squawking.

Well here we have a similar experience on offer, plus the added practicality of a huge boot, three extremely comfortable rear seats, loads of head and leg room, all the infotainment tech any car could warrant, and the whole package clad in leather and Alcantara. All for £50k less than the Merc.

At which point my old ‘How can anyone seriously consider shelling out that much money for a BMW?’ question vanishes into thin air. Can’t really fault the car. Can no longer even begin to fault the price.

I wonder if that applies to this beast?