Omicron ‘IS spreading in Sydney’: Fears virus is in the community

Omicron ‘IS spreading in Sydney’: Fears virus is in the community as schoolboy who hasn’t been overseas catches the mutant strain

NSW Health is concerned the state’s ninth Omicron COVID-19 infection ‘may have been acquired in the community’.

The latest case, a student at Regents Park Christian School, has not been overseas and has no links to people who have travelled abroad.

Two more students are being investigated over suspicions they could be infected with the variant, health minister Brad Hazzard said on Friday.

‘This is a concern, to an extent, that this is the first case we know of a person who has no travel history. It could appear the case is on NSW soil transmission.’ 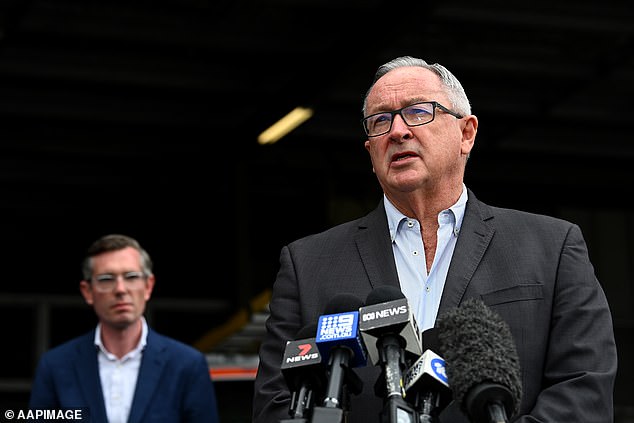 Two more students are being investigated over suspicions they could be infected with the variant, health minister Brad Hazzard said on Friday

Mr Hunt eased concerns about the transmission saying that the Omicron variant did not appear to be as ruthless as the Delta strain.

‘Transmission is always a concern. We need to keep it in perspective at the moment,’ he said.

‘Worldwide there isn’t clarity if this particular variant will cause us any problems as the other variants.

‘We’re not seeing people suddenly rushed to hospital. What we’re seeing is people who are asymptomatic.’

A traveller who flew into NSW on Sunday night after being in southern Africa – was also added to the state’s Omicron tally on Thursday night.

They have been in quarantine since their arrival on Singapore Airlines flight SQ231.

A child became the state’s seventh confirmed case earlier on Thursday, with urgent genomic testing on the way to confirm whether their fully vaccinated parents have the new variant too.

The family’s diagnosis sparked a number of new location alerts in the Chatswood area in Sydney’s north between November 23 and Wednesday.

Casual contacts need to get tested and isolate while they wait for a negative result, and get tested again if they develop symptoms.

The family is in special health accommodation, but were in the community before rules were changed on Saturday in response to the detection of Omicron cases.

NSW Health is concerned they may have caught the virus while flying into Sydney on Qatar Airways flight QR908 from Doha on Tuesday last week.

The three family members had not been in southern Africa.

The department is contacting other travellers on that flight to get them tested and into isolation.

Eight countries in southern Africa are of particular concern to health authorities.

Five of the eight cases confirmed in NSW were placed into special health accommodation before they were diagnosed with the Omicron variant, having arrived after the rules for entry were changed.