Omicron will peak in the US with up to 5.4m cases a week by Jan. 9 and not the end of the month

The peak for Omicron cases in the US will peak at up to five million cases per week by the beginning of January after a busy festive period.

The new Omicron variant has swept the nation over the course of the past month after South Africa, who recently passed its peak, saw the first of the new strain in late November.

In a study by Columbia University, researchers speculated that the virus would peak to around 2.5 million by January 9. However, some have estimated the surge to go to 5.4 million.

New York City has seen a massive impact due to the surge in cases as 76,555 were reported on New Year’s Eve which also hit a new state record.

As the new variant continues to sweep the city, approximately 22 percent of state residents have received a positive test with 339, 853 test results reported. 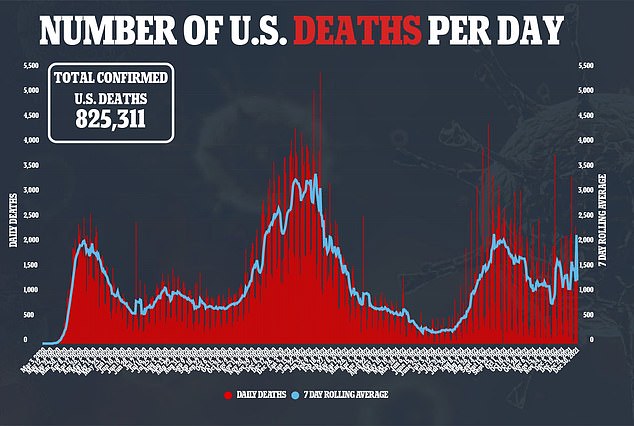 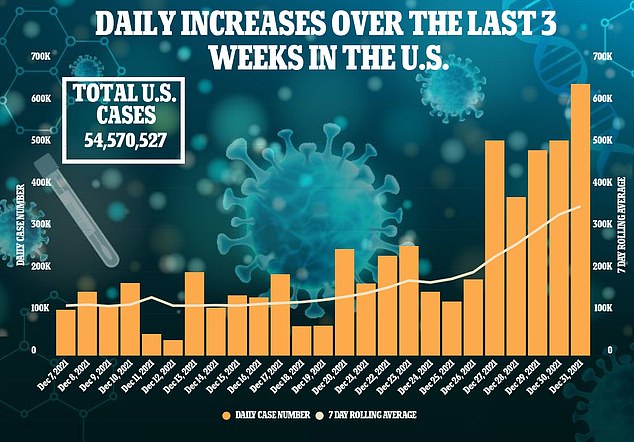 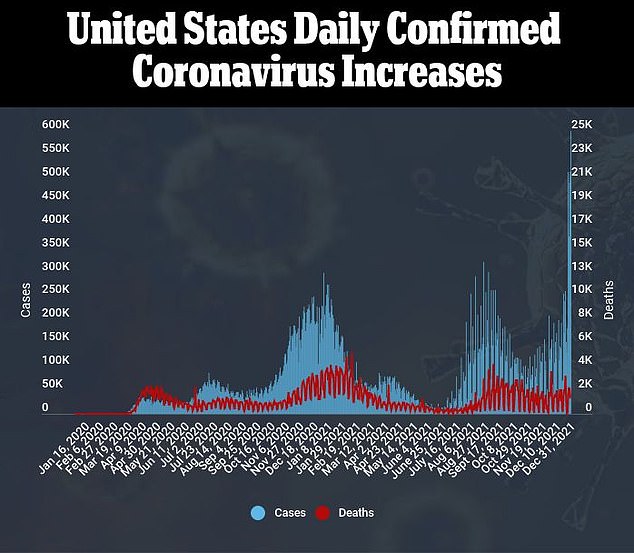 The US broke a world record for average daily COVID cases for the second day in a row with 647,067 reported on Thursday 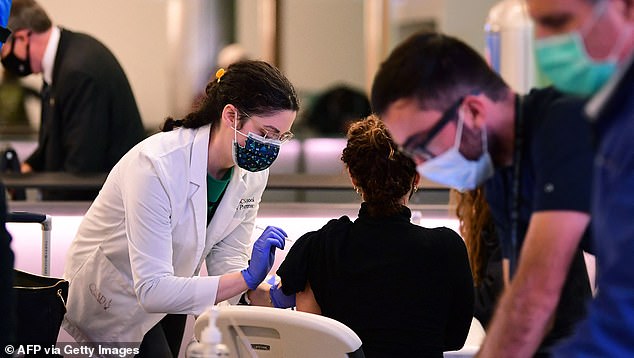 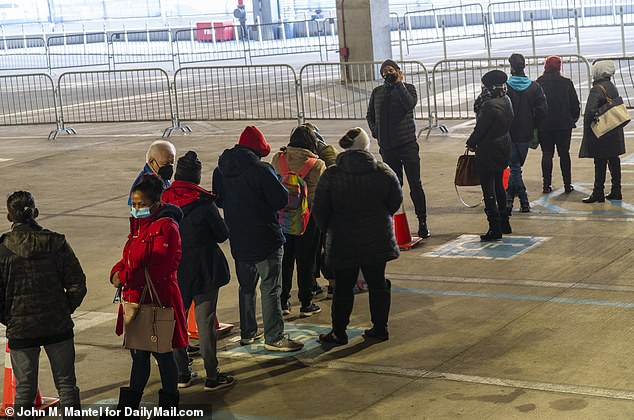 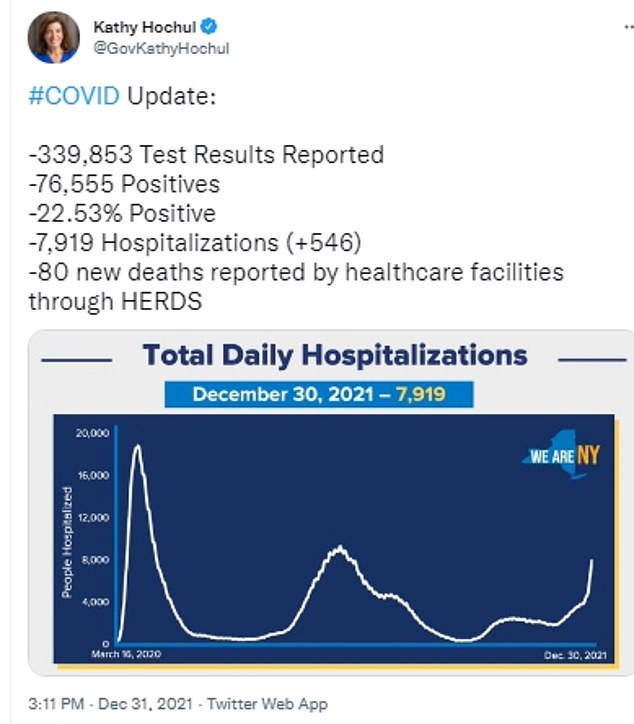 Epidemiologist Dr. Jeffrey Shaman called the numbers ‘shocking’ as cases continue to increase in both the state as well as in the country.

Shaman also added that rise in cases could lead to more localized outbreaks rather than in larger cities such as NYC.

Hospitalizations in the US have also increased to 83,451 as of Friday with the numbers of infections continuing to spike.

This comes after the nation hit another global record when 647,067 new cases had been reported on Thursday. 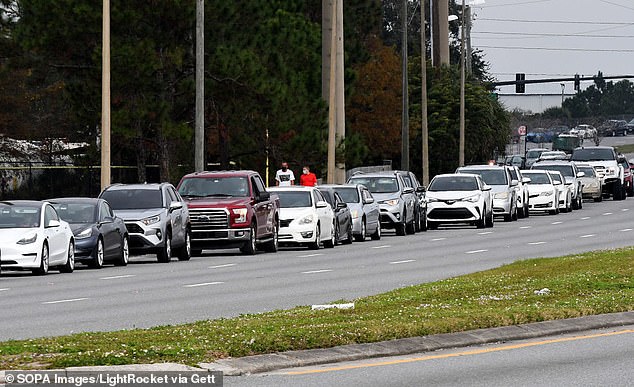 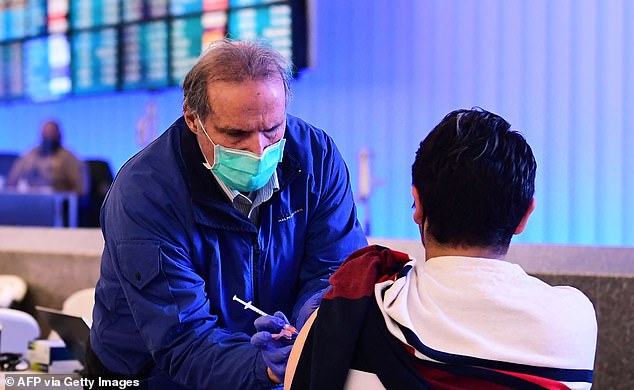 About 62 percent of the US is fully vaccinated, with 73 percent having received their first dose

In total, the United States recorded 2.49 million cases within the past week, outpacing the country’s previous record of 1.7 million new cases recorded in the one-week period from January 3 through January 9.

With the case count rising so rapidly, partly due to the highly contagious Omicron variant, the CDC estimates that more than three Americans are testing positive every second.

‘We are at the very beginning, unfortunately, and likely have at least four to eight weeks before we’re going to see it rise and then begin to fall again. And during that time, we are going to see COVID activity in this country like we haven’t seen since the beginning of the pandemic,’ Michael Osterholm, an epidemiologist at the University of Minnesota, told CBS News.

‘We’re not going to live forever in a constant crisis, but for the time being, it’s going to be a challenge,’ Osterholm added.

Some cases may not even be making the official count because of the rise in at-home tests. What’s more worrisome about the high numbers is that health experts often expect disturbances in testing and data reporting.

About 62 percent of the US is fully vaccinated, with 73 percent having received their first dose, according to the New York Times.

In addition, about 68.8 million of the fully vaccinated have also received a third dose, or a booster shot, since August 13, according to the Centers for Disease Control and Prevention.

COVID testing sites have also seen significant backup over the course of the past few weeks as cars were seen backed up for miles as well extensive lines formed down sidewalks across the nation. 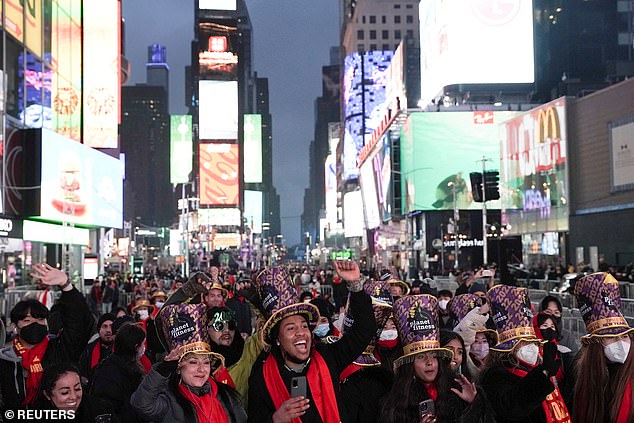 Despite the surge in cases, about 15,000 New Yorkers gathered in Time Square to celebrate the new year 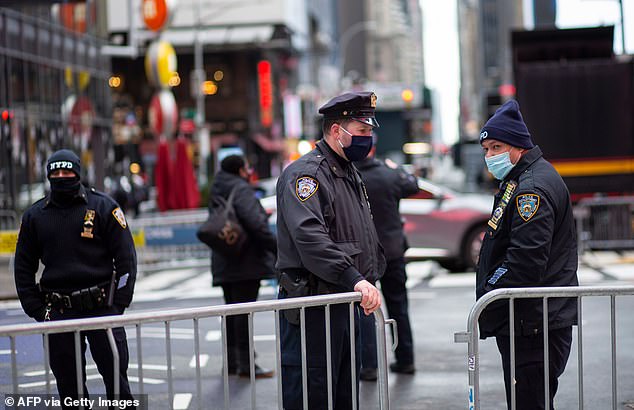 A series of cancelled and delayed flights were also seen over the course of the holiday weekend as thousands were forced to spend Christmas on their own.

Across the pond, a record 183,037 people are hospitalized with the virus, as London has emerged as a global virus hotspot. While some fear lockdown could return, Prime Minister Boris Johnson quelled concerns Thursday by telling Britons to enjoy the New Years holiday.

Other European nations like France, Germany, Norway and Denmark have instituted lockdowns to deal with recent Omicron surges, though, as the variant strikes much of the world.

Meanwhile it South Africa, where the variant was first discovered and the site of the first recorded Omicron outbreak, cases and hospitalizations are starting to decline – signaling the variant could already be running out of steam.