On Bear Ridge comes with an overdose of alternative-reality miserabilism

Think of Rhys Ifans and you can’t help but remember Spike from the film Notting Hill – Hugh Grant’s rancid, lovable, scene-stealing flatmate in underpants. On stage, Ifans has had a memorable stint of late, playing a terrific, mouldy Scrooge at The Old Vic and a decaying, 400-year-old monarch in Exit The King.

Now back in his native Welsh capital, he brings his powerful stage presence – and a shaggy beard – to this new role as a lugubrious butcher, John Daniel, who inhabits a derelict shop on the side of a mountain.

As inscrutable as any Samuel Beckett play, this evening comes with warm, lyrical echoes of Dylan Thomas. (Ifans, incidentally, was Captain Cat in the 2015 film version of the poet’s classic play Under Milk Wood.) 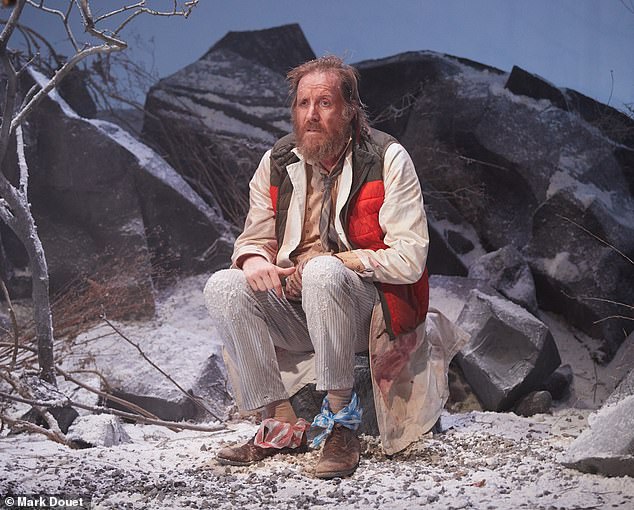 Now back in his native Welsh capital, Rhys Ifans brings his powerful stage presence – and a shaggy beard – to this new role as a lugubrious butcher, John Daniel

The ‘old language’ is constantly referred to. It’s not necessarily Welsh, it’s just dead. So is John Daniel’s son. He was a philosophy student: ‘The only one of our family who ever thunk,’ says his poor dad.

The boy’s mother, Noni – touchingly played by Rakie Ayola – lets you into her grief with great delicacy, as you learn the family’s terrible story.

The evening is also funny – Ifans getting big laughs with his understatements and eccentricities, and congratulating his trousers on their goodness and loyalty – as well as being a refreshing hymn to the unvegan joys of a good chop. 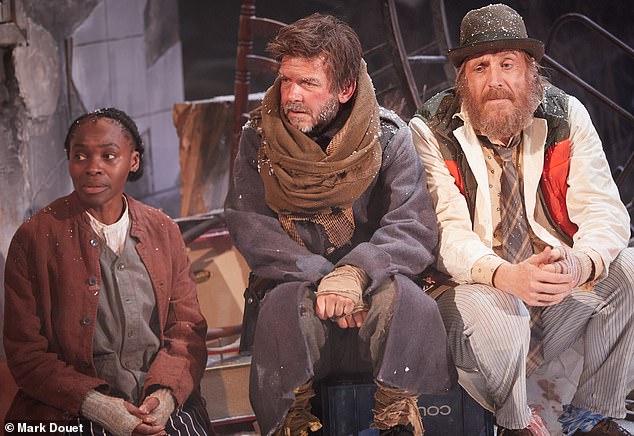 Daniel’s son’s mother, Noni – touchingly played by Rakie Ayola – lets you into her grief with great delicacy and such horrors are evoked when an army captain (Jason Hughes) arrives

The shop’s slaughter boy (Sion Daniel Young) pops up to add to the carnivorous theme.

Meat is in the play’s fibre. The writer Ed Thomas (who also co-directs with Vicky Featherstone) came from a village where his father ran an abattoir and butcher’s shop.

The play also recalls the celebrated 1943 docudrama The Silent Village, which imagines a Welsh community of resistant miners who all die singing when executed by the occupying Nazis.

Such horrors are evoked here when an army captain (Jason Hughes) arrives, traumatised, having seen or committed God knows what atrocities.

The play comes with an overdose of alternative-reality miserabilism and feels stretched even at 90 minutes. But the lush poetic richness of the language is the joy here, and Ifans’ sonorous butcher revels in it, his voice reverberating in lightly falling snow.

‘Britain. Beautiful place. Yeah. Shame we can’t run a railway.’ That’s the resounding passenger verdict in this play staged in the brick vaults right under Waterloo Station. The rumble of trains provides the soundtrack to a compelling piece of journalistic drama – first seen in 2003 – about our rubbish railways.

A cast of nine provide 40 characters, including railway big-wigs, civil servants, bankers, survivors and victims. You learn what it feels like to be in a crash and to witness the dead.

‘Don’t you know? You always lose your shoes,’ is one line I won’t forget. 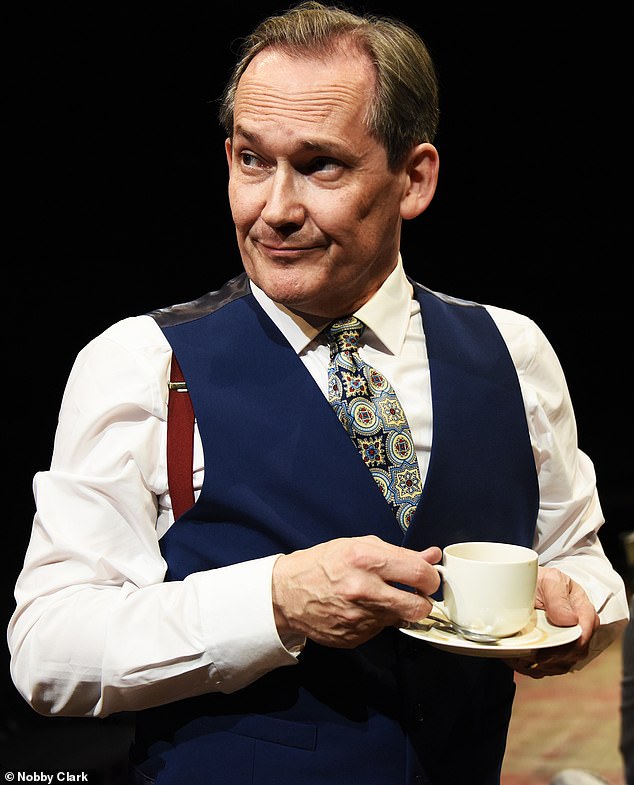 The piece is 16 years old but the emotional impact of Alexander Lass’s production is totally live. You reel at the sacrifice of safety to profit, the buck-passing, the craven cover-ups and the corporate greed behind these successive tragedies.

I came out boiling with rage.

Somerset Maugham’s ‘Anyone for tennis?’ country-house play looks innocent enough. But beneath the gentility of this lost classic lurks a furious post-mortem of World War I.

Written in 1932, his verdict is damning and depicts a land utterly unfit for heroes – and indeed for the women who picked up the pieces. Of the play’s walking wounded there’s a blinded son, a bankrupt and an alcoholic.

It also features three sisters marooned – Chekhov-style – in a comfortable rural hell with zero prospects. The eldest, Eva (Rachel Pickup), is sick of caring for her sightless brother and is in love with an ex-naval hero who’s probably gay. 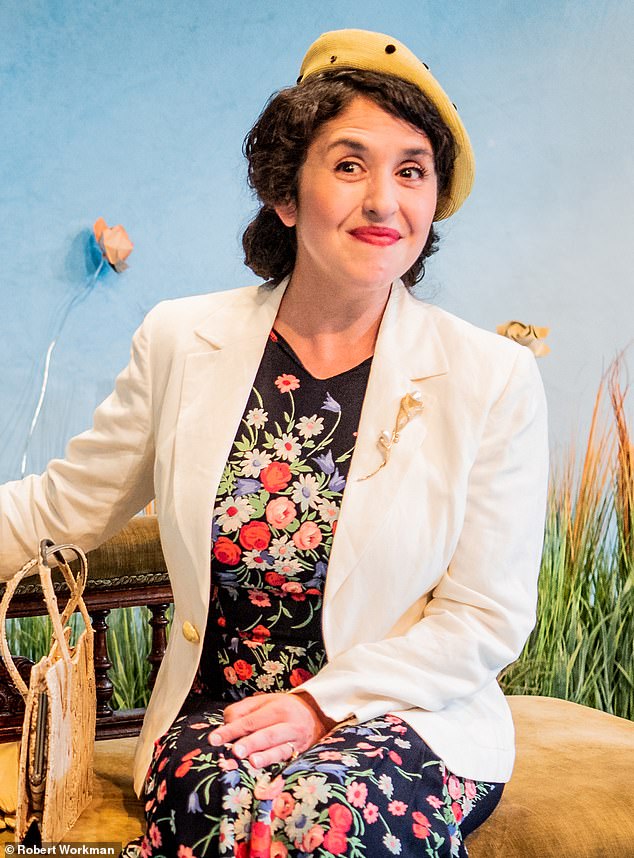 Written in 1932, Somerset Maugham’s verdict is damning and depicts a land utterly unfit for heroes – and indeed for the women who picked up the pieces (Viss Elliot Safavi, above)

Of the other two, one torments a besotted chap old enough to be her father (Michael Lumsden), the other is miserably married to a brutish, whisky-sodden tenant farmer.

Diana Fletcher plays – superbly – the serene family matriarch but Tom Littler’s cast is let down by a couple of under-par performances. But this damn-you-England drama still explodes in the second half like a grenade.

John Osborne wrote The Entertainer in 1956, the year of the Suez Crisis – an event so catastrophic for Britain’s image, global influence and sense of identity that it has drawn comparisons with Brexit today.

This bleak play, with its tale of a former music-hall act, Archie Rice, fallen on hard times, was a metaphor for this failure and the country’s post-war malaise and loss of empire.

Here, though, director Sean O’Connor has placed the action during the Falklands War of 1982 – another torrid time when Britain found itself in the international spotlight, unemployment soared and race riots flared up under the prime minister Margaret Thatcher. 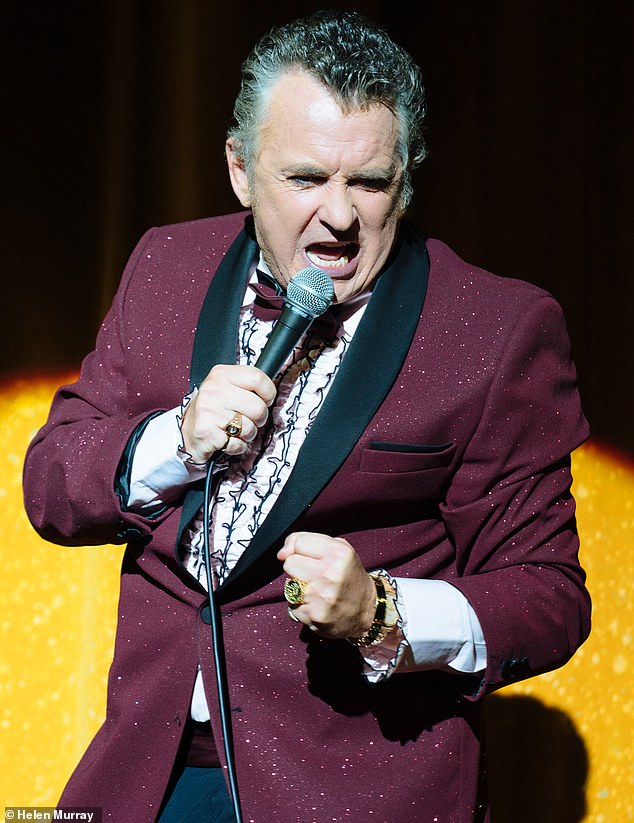 As a former stand-up and game-show host, ex- EastEnder Shane Richie has the tacky shtick and patter spot on when playing the iconic Archie Rice

The original production saw Laurence Olivier take the iconic Rice role – a daring, career-changing move for the actor. Since then it has starred Max Wall, Michael Gambon and, most recently, Kenneth Branagh (self-directed, rather too nattily dressed, nimbly tap-dancing).

As a former stand-up and game-show host, ex-EastEnder Shane Richie has the tacky shtick and patter spot on. He’s also more of a wide boy whose appalling sexist material is dying with the Eighties wave of alternative comedy.

There are updated jokes and songs (Born With A Smile On My Face is bitterly ironic) and he even drags up as Mrs T. Stick that up your junta, as the anti-Argie Sun headline ran.

Womanising, tax-avoiding Archie carries on acting up a storm at his lowly seaside home too, where the family is drowning in booze: a gin-swilling wife at the end of her tether (Sara Crowe), an anti-war protesting daughter (Diana Vickers), a fulminating racist grandad and a returning war-hero son.

Richie gives a sense of desperation and doom (though he could perhaps do with more grit and venom) in a brave reinterpretation of a modern classic.

Here we go again: after a musical and two movies, Mamma Mia! has a new incarnation. Guests take their seats in a Greek taverna – inside the O2 with much plastic foliage and sun-dappled lighting – for a four-course meal, during which a story stitched together with those durable Abba hits unfolds around you.

The plot is cheesier than a truckload of feta. Kate (Steph Parry) runs the taverna with her Greek husband, whom she met while filming Mamma Mia! But now Nikos (Fed Zanni) is reluctant to let her nephew be with his daughter. Can love conquer all?

Of course it can, and this show will conquer audiences – as long as they can forget how much money, money, money they paid. Tickets start at £151.