And just like that, Emily arrived in Australia. This morning, at 12.40pm local time (5.40am BST) the first ever direct flight from London to Australia landed in Perth, making aviation history.

Fire trucks ceremoniously squirted water cannons, a crowd cheered and TV crews recorded 236 blinking passengers stepping off the historic flight and into the embers of Australian summer, all looking surprisingly lively. And I felt genuinely relaxed (though the business class seat helped, admittedly).

Our journey had taken just 16 hours and 30 minutes (15 minutes ahead of schedule) but it had been years in the making – the fruits of a decade of dedicated seasonal air pattern analysis for starters, and Qantas is justifiably proud to have finally achieved it.

Not only will the journey between the UK and Australia now be significantly shorter (four hours less than the next shortest flight, via Dubai), it will also be noticeably more comfortable aboard the Boeing Dreamliner. This sleek, parabolic panther of an aircraft boasts multiple advantages over its rivals, including softer cabin noise, larger windows, anti-turbulence technology, improved air quality and more space in every cabin. It’s all designed to lessen jet lag – and it appears to work.

Dignitaries, business professionals, reuniting families, journalists and a smattering of celebrities – comedian Adam Hills and actress Gemma Atkinson were among those disembarking Qantas Flight 10 – all looked remarkably energetic considering they’d just travelled 9,009 miles from the other side of the planet.

And I felt refreshed and raring to go. 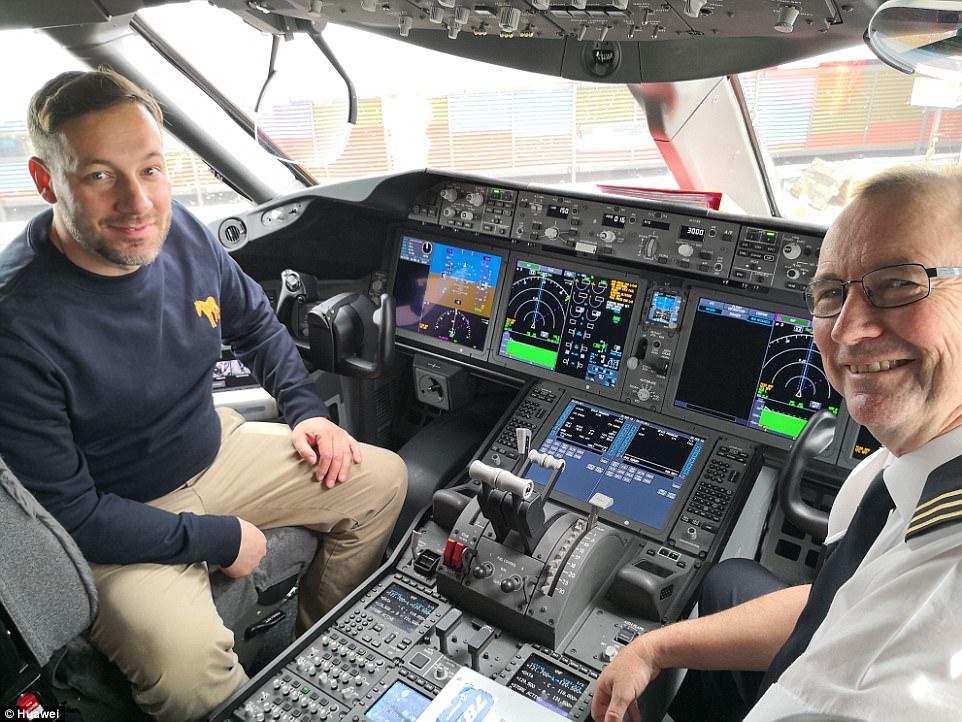 The Dreamliner definitely makes a difference. It almost felt like a trick – like I couldn’t really be in Australia, because I hadn’t earned it. But ultimately I’m not complaining. It has gone from a full day flight to an overnight flight – psychologically more akin to a trip to California now.

The most senior of the plane’s four pilots – the affable Captain Andrew Simpson – was also full of beans, and understandably upbeat after completing such a momentous flight.

‘This is absolutely fantastic, a real game changer for the world of aviation,’ he said. ‘For the first time, Australia and Europe have a direct air link, and that is a big deal. It’s a major honour and extremely humbling for me to be at the pointy end of this particular plane.’

Our journey itself was almost ludicrously smooth – the seatbelt sign did not flicker on even once, with the only remotely rough patch of air experienced a few hundred miles north of the Maldives, before the Dreamliner tore away across the Indian Ocean.

There were some nice touches with regards to the on-board service too: every passenger’s plastic water bottle was refilled, never replaced, while all of the meals had been specifically designed by chef Neil Perry, in consultation with experts from The Charles Perkins Centre at Sydney University, to stave off jetlag.

Back at London Heathrow’s Terminal 3, our take off had been marked in style too, with actors dressed as kangaroos and surfers, and a giant of a man playing us aboard with an enormous didgeridoo. Even our boarding passes bore the legend ‘Congratulations! You are boarding the first non-stop UK-AUS flight.’ 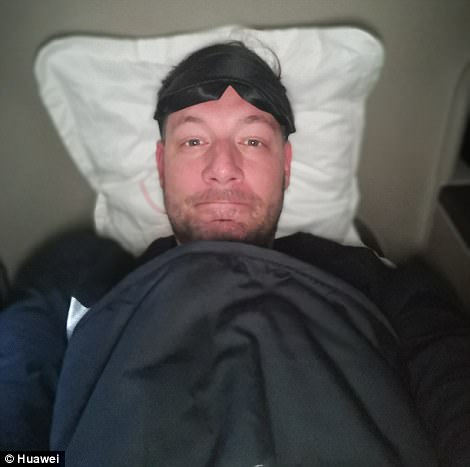 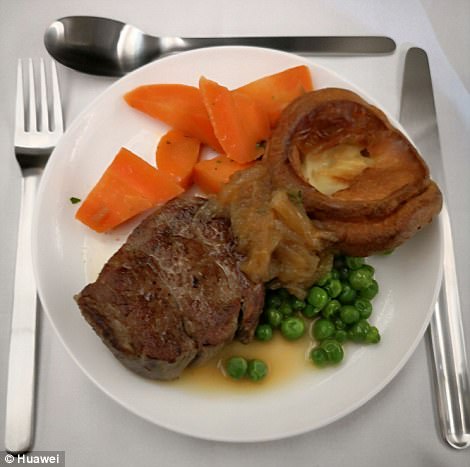 Jonathan, pictured left in his business class pod, said that the direct flight makes the journey to Perth from the UK akin to a trip to California. Pictured right is one of his meals – a traditional British roast 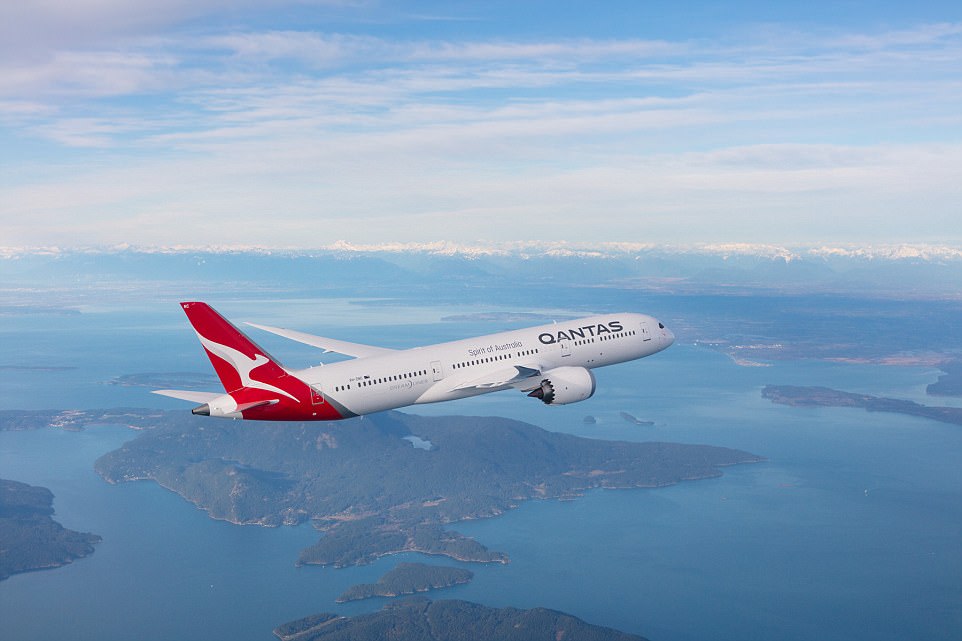 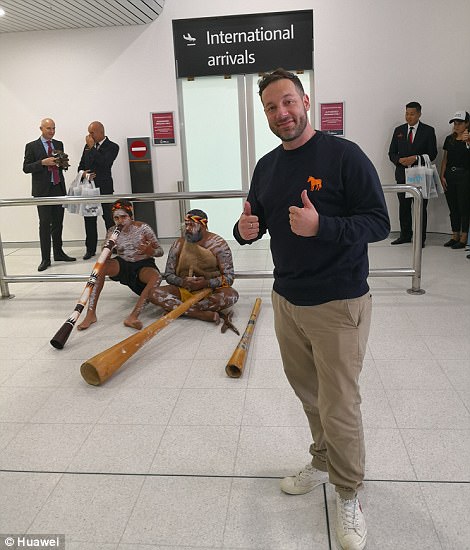 ‘Refreshed and raring to go’: Jonathan gives the direct flight the thumbs up in Perth

Travelling in this fashion is light years ahead of the original London-Australia flight – the infamous ‘Kangaroo Route’ – which began in 1947. That four-day intercontinental hopscotch – involving seven stops and costing the equivalent of more than £24,000 today – has now become a seamless, non-stop 17-hour zip Down Under. (It’s significantly cheaper in real terms too, with tickets for this London-Perth route starting at just £793 per person return in economy).

The new route, which will now fly daily, officially becomes the longest anywhere in the world from London (a massive 24 per cent longer than the previous record holder, from Heathrow to Jakarta) and the first ever direct air connection between the continents of Europe and Australasia.

There’s still room for improvement of course. No Wifi on the history-making QF10 is an issue – particularly as British Airways has introduced it to many of its own long-haul flights in recent weeks. And Qantas remains agonisingly short of Qatar Airway’s current world record for the longest commercial flight on Earth: 9,028 miles between Doha and Auckland.

One gets the impression that record won’t stand for too long, however. Qantas already has its eyes on a non-stop London to Sydney flight by 2022, with New York-Sydney potentially coming even earlier. For now, all eyes are on the historic achievement of QF10 but ultimately, success on the London-Perth service is just the beginning.

Jonathan Thompson was challenged by Huawei to take the upcoming Huawei P20 smartphone and test its features whilst onboard. Follow Huawei via @HuaweiMobileUK. To find out more about the Huawei P20, visit newrenaissance.com.

FACTS ABOUT QF9 – THE PERTH TO LONDON ROUTE

1. QF9 is operated by four pilots across the 17-hour journey, with one or two pilots resting at any one time.

2. The flight will follow different flight paths depending on the best winds, helping the aircraft fly faster and more efficiently. Qantas analysed a decade of seasonal wind patterns in preparation for the new service.

3. At 14,498km, QF9 is the third longest commercial flight currently in operation. It is the world’s longest Dreamliner flight.

4. QF9 will carry around 92 tonnes or 110,000 litres of fuel with the Dreamliner burning approximately 20 per cent less than traditional aircraft its size.

5. With a total seat count of 236 passengers, the Qantas Dreamliner has significantly fewer seats than many other airlines who have configured the same aircraft to carry more than 300 passengers.

6. Currently, most aircraft have cabin air pressure equivalent to that of an altitude of 8,000 ft. For the Dreamliner, Boeing cut that down to 6,000 ft, meaning its closer to conditions on the ground.

7. Menus for the flights between Perth and London have been designed to maintain hydration, aid sleep and reducing jetlag and including poke bowls as well as home style comfort food.

8. There are more than 21,000 individual items loaded onto the aircraft for each flight between Perth and London including 330 peppermint tea bags and hundreds of chocolate biscuits.