Until recently, all I really knew about Ruth Bader Ginsburg was that she was short, elderly and, even at the age of 85, still both a force for liberal good in the US Supreme Court and a thorn in the side of President Trump.

Cinematically speaking, however, RBG, as she is often known, is having quite a year, and I now know quite a lot more.

A documentary charting her long life and career, called simply RBG, was released here last month and is up for two Oscars at tonight’s ceremony in Los Angeles. 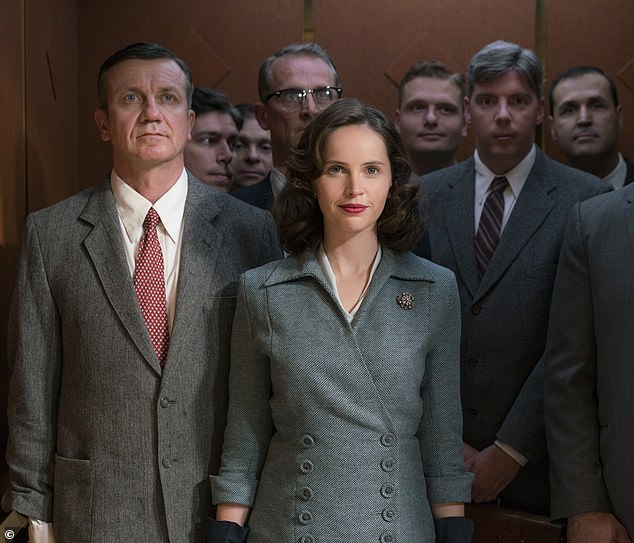 And now along comes a feature-film dramatisation, On The Basis Of Sex, which isn’t up for any Oscars (its British star, Felicity Jones, is entitled to feel a little miffed about that) but does do a very watchable job of introducing a wider audience to both the woman and her work.

Want to know why Ginsburg became only the second female judge ever to sit in America’s highest court? This is the film that explains why. Even for British audiences, it’s an important, epoch-shaping story.

In the first of several scenes that reminded me of the old American legal drama The Paper Chase, we begin at Harvard Law School in 1956, where Ruth (Jones) stands out for two reasons.

Not only is she one of the few women in a veritable sea of sober, grey-suited young men, she’s already married to one of them – Martin Ginsburg, played here with customary, lightly worn charm by Armie Hammer. 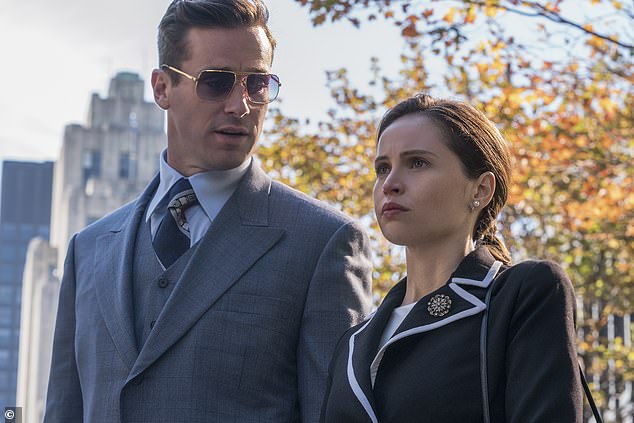 Martin Ginsburg, played here with customary, lightly worn charm by Armie Hammer (above) and RBG are a couple who support each other professionally as well as personally

At home the pair are devoted to each other (they would remain happily married for 56 years until his death in 2010) but they work well together, too. When Martin has an early brush with cancer, it is Ruth who goes to his lectures and types up his essays, despite the fact that the couple already have a baby.

A few years later, when she’s being fobbed off by every law firm in New York (either for being a woman or for being Jewish or both), it is he who urges her not to compromise. This is a couple who support each other professionally as well as personally.

But eventually she does compromise, taking an academic job where – riding the first wave of late-Sixties feminism while all the time constrained by her Fifties upbringing – she specialises in the law and women’s rights.

But it’s only when Martin, by now a successful tax lawyer, unearths an esoteric dispute between the Internal Revenue Service and a home carer that the pair realise they have the chance of fundamentally changing American law. 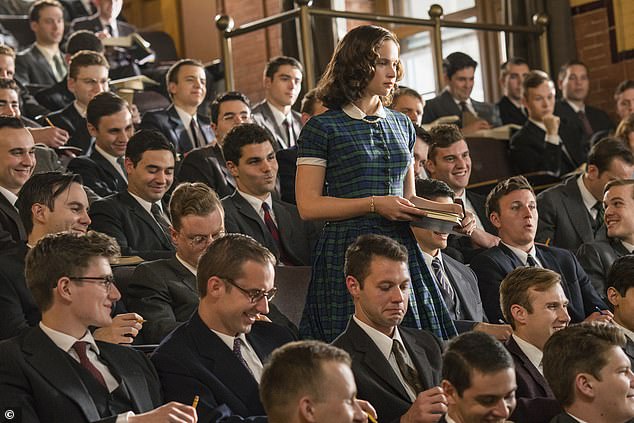 Ruth Bader Ginsburg stands out as one of the few women in a veritable sea of sober, grey-suited young men at Harvard law in the late 1950s. This is a good film, but not a great one

Paradoxically, they believe they can advance the cause of women’s rights and sexual equality because the carer looking after an elderly relative is a man. It is he, the Ginsburgs allege, who is being discriminated against ‘on the basis of sex’, which turns out not to be a cheap come-on of a title, as I initially suspected, but an oft-repeated American legal term.

Nevertheless, I let out a silent cheer when someone eventually suggests ‘gender’ might be a better word.

On The Basis Of Sex is a good film but not a great one. Its director, Mimi Leder, still best known for Deep Impact from 1998, is more a maker of television these days, and that’s what this often resembles. The narrative structure is straightforward, linear, unambitious and safe.

And although series such as the aforementioned The Paper Chase and LA Law have shown what good drama American law can make, here the story does eventually become bogged down in legal fine detail and the inner workings of the American Civil Liberties Union, which won’t be familiar to most British audiences.

At Harvard Law School, Ginsburg, one of just nine women among 500 students, was asked: ‘Why are you here, taking the place of a man?’

Justin Theroux plays its prickly leader, Mel Wulf, and provides the first of several supporting performances that don’t altogether work and certainly don’t match the standard being set by Hammer and, particularly, Jones.

Natalie Portman was apparently linked to the role of RBG for many years but Jones definitely makes it her own, despite a screenplay (written by Ruth’s nephew) that fails to shine as much light as perhaps we would have liked on what Ginsburg is like in private.

I may not actually believe that Ginsburg once stood on a New York street in the pouring rain while delivering an impassioned eulogy to the fierce feminism of her teenage daughter, but there’s no doubt Jones delivers the big moment extremely well, just as she rises to the very different dramatic challenges posed by the climactic courtroom scenes.

The film makes much of a quote from one of Ginsburg’s Harvard professors that ‘a court ought not to be affected by the weather of the day but will be by the climate of the era’.

And it is the climate of today’s era that makes this an important film to see, partly to recognise how far the world has come, thanks to women such as Ginsburg, but how much could so easily be lost should the political and judicial climate change again.

Or has that already happened?

This is the film Liam Neeson was promoting when he made those disastrously ill-advised comments about seeking revenge after the rape of a friend. You can see the vague connection – this is a revenge movie, with Neeson playing a Colorado snowplough-driver who, following the drugs-related murder of his son, sets out to kill everyone associated with the crime. 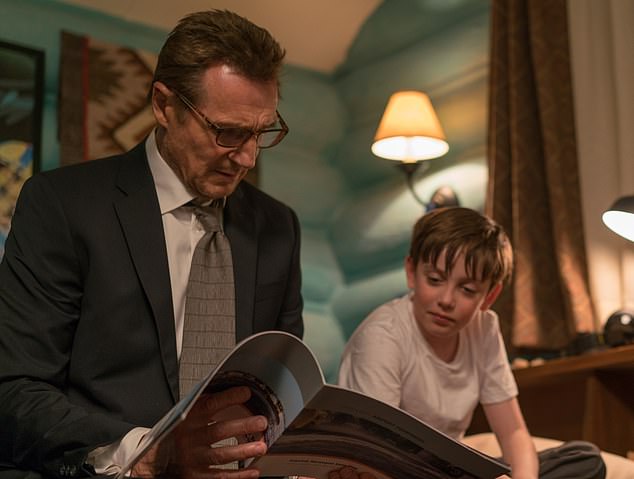 Liam Neeson (above) plays a Colorado snowplough-driver who, following the drugs-related murder of his son, sets out to kill everyone associated with the crime in Cold Pursuit

Based on a 2014 Norwegian film (both were directed by Hans Petter Moland), it is tediously repetitive, while Neeson’s comments underline the film’s own casual racism in stereotyping Asian women, Native Americans and black hitmen along the overlong, ill-judged way.

The Boy Who Harnessed The Wind (PG)

Chiwetel Ejiofor, the Oscar- nominated star of 12 Years A Slave, writes, directs and stars in this authentic-feeling retelling of the true story of the resourceful Malawian teenager who, with his village devastated by drought and famine, manages to make a wind generator out of discarded scrap.

Stripped of sentiment, strong on family relationships and often delivered in subtitled Chichewa, the end result is slowly paced but powerful.

If you watch only two or three foreign-language films a year, this really ought to be one of them. Set in Lebanon, it’s the story of a streetwise 12-year-old boy who, as the film begins, is serving a five-year sentence for a stabbing but sues his impoverished, poorly educated parents for neglect.

Zain Al Rafeea is astonishing as the boy, while Nadine Labaki’s naturalistic direction has earned the film a richly deserved Oscar nomination.