On the frontline of life and death: Behind the scenes at an NHS hospital

In 20 years of nursing, Christie Watson has seen it all. She gives a candid account of life behind the scenes at an NHS hospital, where miracles are an everyday occurrence

The landscape of operating theatres must be terrifying for patients, but it’s becoming normal for me. It’s amazing what you can get used to. The first operation that I watch is a heart-lung transplant at a large children’s teaching hospital. I am 19 years old and still a student nurse. The operation takes more than 12 hours. It requires a team of surgeons to behave like a relay team but, instead of a baton, they pass between them a human heart and lungs.

I’ve been looking after the patient, a 14-year-old boy named Aaron suffering from cystic fibrosis, who is confined to bed, oxygen inserted into his nose, with a tired, wet cough and sallow, grey skin. I help him get ready for the operation. I rub cocoa butter on to his dry knees and take away his Game Boy, swearing to guard it with my life. I wet his lips with a small salmon-pink sponge soaked in sterile water, not wanting to risk the tiniest possibility of him being exposed to any germs.

There is a small cork board next to his bed covered in a mosaic of photographs of Aaron and his friends. It is common for a child’s hospital room to be personalised. Apart from the oxygen piped through the wall and the suction canister, it could be a typical teenage boy’s bedroom. We chat almost as if nothing is happening, but when the porters come to help me transfer Aaron to the anaesthetic room he grabs his mum. ‘Don’t go before I’m asleep,’ he says. He looks at me. ‘And you’ll be there the whole time?’

I’m anxious but have learnt the face that nurses know best. I focus on showing a soft smile

His mum holds his hand, walking beside the bed. I have one eye on the monitor which measures the oxygen in Aaron’s blood. I will it not to drop. ‘Not now,’ I say in my head, ‘steady, steady.’ I’ve heard stories of children getting worse in broken-down lifts, oxygen running out and full cardiac arrests being badly managed until a lift engineer is found. I am anxious but have already learnt the face that nurses know best. I slow my breathing and focus on showing an easy-going body language and a soft smile. One of our lecturers told us that if a patient ever sees an experienced nurse look worried, it means they are likely dead already.

Most of us pass through the operating theatre largely without memory. We go to sleep and wake up without examining too closely what happened in between. But theatre is a place where life and death are literally in someone else’s hands. Most of the time everything goes right but when it goes wrong it’s a disaster. The organised, calm, sterile environment can look like a war zone when a patient suddenly deteriorates.

I am waiting, with my teeth pressed together, for the awful moment between a child being anaesthetised and a parent having to kiss them goodbye. I stand near enough to reach out and pull Aaron’s mum away, if necessary, in the seconds after Aaron has fallen asleep. We do not want her to witness the next stage: eyes taped shut, head tipped back as far as possible and a tube pushed into his trachea, needles into his veins, remaining clothing removed. 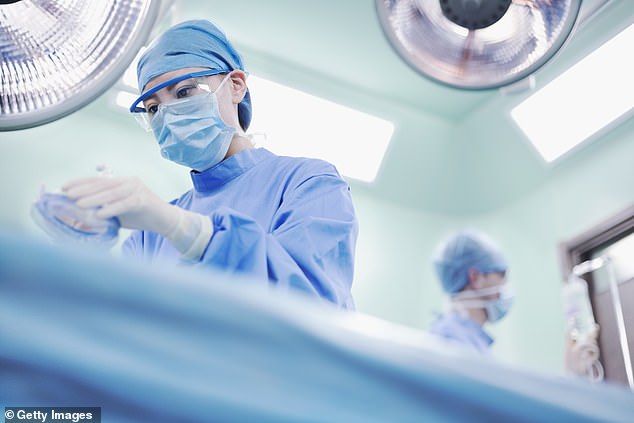 ‘The surgeons behave like a relay team but, instead of a baton, they pass a human heart and lungs’ (picture posed by models)

I walk with Aaron’s mum for a few minutes outside theatre, hug her, wish I could say something to help. Nurses can be found in the theatre corridors of all hospitals with their arms around a relative, reassuring them that the operation is going well. I walk with her back to the ward where she begins to cry. I sit with her a while without speaking. I do not tell her what she wants to hear. I have learnt that already. The previous week one of the first babies I had looked after was having a fairly straightforward operation to fix a hole in his heart. ‘He’ll be fine,’ I said. But he was not fine. He did not come back to his parents. He died on the operating table and his parents were distraught and confused. So I don’t tell Aaron’s mum that he will be fine because none of us really knows.

The operating theatre is full of people, yet you could hear a pin drop. I am standing on a viewing tower with a clutch of medical students and junior doctors. I focus on a strand of Aaron’s hair. It reminds me that he is not a body being cut apart, but a boy obsessed with astronomy, whose battered Game Boy I have locked away safely. The surgeon’s body is completely still above Aaron, his arms and hands the only part of him moving. The other surgeons (I count four) are facing him; one has a suction catheter, hoovering up blood around the surgeon’s hands so that he gets a better view.

It isn’t the surgeon, though, that I am here to watch. A wide-shouldered woman standing next to him has her hands in front of her. Below is a long table of metal instruments, which shine diamonds on to the stark white ceiling. Every so often one of the surgeons will say something without lifting their eyes and then she picks up an instrument and passes it to them, placing the handle in their hands. She is the scrub nurse. When the instrument is finished with, the scrub nurse turns her head and flicks her eyes to the nurse standing behind her, armed with a plastic tray, who then places that on a table. Nothing is removed from the room. Everything is counted and counted again, ‘in case the surgeon accidentally leaves a swab inside a cavity’, she tells me the following day. ‘And if things are not going well, my instruments can get thrown and then lost.’ 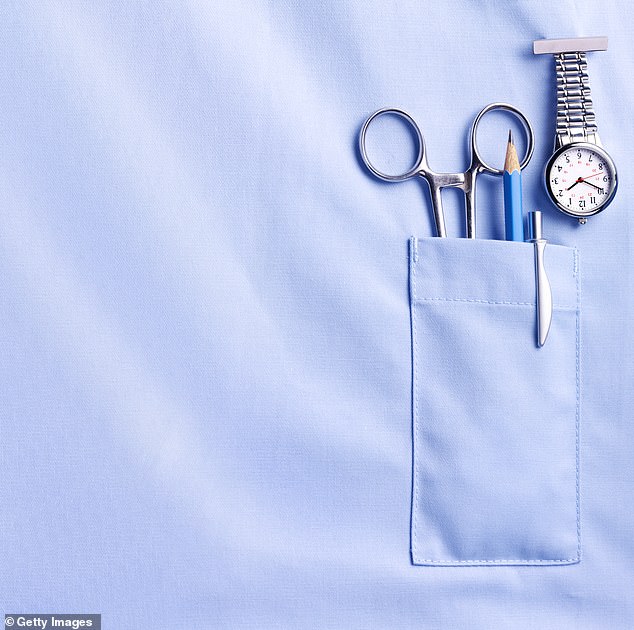 ‘I stand until I can no longer feel my toes, and the teams have changed three times’

‘By the surgeon, occasionally even at the nurses.’ She looks at me and smiles. ‘It’s a stressful job.’

I have no idea if she is telling the truth, or even if she means the surgeon’s job or hers is stressful, but I am too terrified to ask.

Theatre nursing has moved on, with nurses working across different areas, including admissions, recovery and day surgery, but when I started 20 years ago, scrub nurses remained scrub nurses for their whole career. I’m not particularly organised or good at standing for hours, and the heat of the operating theatre is almost too much to bear, but I watch the heavy hands of that scrub nurse for hours during the operation. They are perfectly still, then suddenly purposeful, almost aggressive, moving completely differently from the delicate hands of the surgeon.

I watch the nurse’s eyes; imagine all she has seen. Her gaze rests occasionally on the surgery but then flies around the room, landing on the monitors, where her eyes record the vital signs. She turns her head and glances at the assistant nurses by the door, at the organ-donation coordinator nurse holding the box containing another person’s heart and lungs. It’s a plain square white box with the words ‘human tissue’ written on it. Then she looks up at the eyes of the organ-donation nurse. Something passes between them, something that at the time I do not quite understand. But I appreciate the importance of what is happening. The room is alive with miracles: of technology, surgical technique, science and luck, alongside the sadness and loss, recognised by the nurses.

The organ-donation coordinator nurse is the person standing between life and death, talking to families about donating the organs of a recently deceased loved one so that another – Aaron – can live. The heart can beat for 72 hours after a person is pronounced brain-dead. Three people die in the UK every day waiting for an organ. Donation should be compulsory unless a person refuses. Opt out, not opt in – as in other countries. Nobody should die waiting for a kidney that is buried in the ground.

I stand until I can no longer feel my toes, and the teams – including the scrub nurse – have changed three times. Despite being the most tired I’ve ever been, I have never felt more awake.

It is a few weeks since the operation and Aaron looks like a different child. His skin is brighter, the oxygen tubes have vanished and the wet, hacking cough is gone. His room is a mess of books and games and cards.

‘I love strawberry ice cream,’ he says. ‘I never liked it before but now I could eat it all day: breakfast, lunch and dinner. And snacks.’ Aaron looks at me meaningfully. He is convinced that somehow he has taken on personality characteristics and emotions from his donor. It is the new heart that he thinks about most. 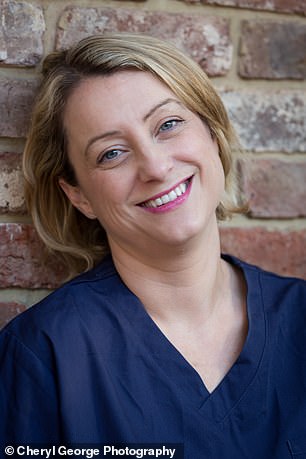 Author and nurse Christie Watson: ‘Sometimes nursing is doing up the ties on the surgeon’s gown. And at other times it is recognising the sadness and loss, and helping a teenage boy to write a difficult letter’

Medics are sceptical about most things, including the idea that the heart houses memory, and the evidence supports this: the heart is simply a bunch of nerves, muscles and chemicals. But art, literature and philosophy have been searching for greater meaning about the heart for thousands of years. The Ancient Egyptians believed that the heart symbolised truth and if it weighed heavier than a feather on Judgment Day it was eaten by a demon, leaving the person’s soul restless for eternity. In this world I wonder what will happen to our souls. We have nothing to weigh our hearts against.

Nurses do not explicitly search for meaning, but meaning is part and parcel of their daily job. Nurses certainly use the language of the heart. They understand and describe patients as broken-hearted. And the best nursing comes from the heart, not the head.

Aaron gets me to help him write a letter to the mother of the boy who died and gave him his heart. The letter must not go directly but the organ-donation nurse is going to find out if the mother wants to read such a letter and, if so, will facilitate the anonymous handover at an appropriate time.

Twenty years have passed since I helped Aaron write that letter, but I still remember the lines he wrote, which made me laugh (‘Did your son like strawberry ice cream?’) and cry (‘It’s not fair your son died so I can live. I absolutely promise I will never forget him’).

I think back to the look that I noticed passing between the scrub nurse and the organ-donation nurse. I think about how nursing is sometimes scrubbing in, passing the surgeon instruments and counting the swabs. Sometimes nursing is doing up the ties on the surgeon’s gown. And at other times it is recognising the sadness and loss, and helping a teenage boy to write a difficult letter.

At the end of my shift Aaron’s mum tells me that he has always liked strawberry ice cream, but they had avoided giving him dairy food as it increased his symptoms of mucus production.

His mum smiles a thousand smiles. ‘Aaron can have all the strawberry ice cream he wants now.’