On your bike! The Dutch bicycle hire firm getting Britain peddling again

On your bike! The Dutch bicycle hire firm getting Britain peddling again – from £12.90 per month

Before the lockdown inspired a boom in bicycling, London had some of the lowest peddle power usage for any capital city in Europe.

All the indicators suggest that lockdown has changed that with, at one point, the government subsidising bike repairs and increased usage reported.

Now with more workers being told to resume normal life, that boom will be put to the test, along with a lot of recently-repaired bikes.

Will we, counter-intuitively become more ‘European’ just as we start our Brexit future, or will we slip back to being the nation where only 14 per cent of people cycle regularly?

Swapfiets (Swap Bikes in Dutch) is a bicycle hire firm which rents bikes from £12.90 per month

One new ingredient which could tip the balance for London’s would-be cycle commuters is the launch a Dutch membership firm offering the chance to have your own bike for a monthly fee.

The system has already seen more than 220,000 people sign up across nine European countries to Swapfiets (Swap Bikes in Dutch) with one key benefit that they are rarely stolen due to their signature blue front wheels.

According to EU figures, four million bicycles are stolen in Europe every year which is 20 per cent of total number of annual sales.

Marc De Vries, CEO of Swapfiets, said: ‘We feel that lockdown revealed a huge desire people had for an easier and more comfortable commute.

‘It has presented a great opportunity to accelerate the cycling agenda and transform our cities into healthy, green, social environments – bikes are a transport solution for life, not just for lockdown.

‘We are very excited to introduce the Swapfiets concept to London’s roads and help make cycling more accessible and affordable for everyone.’

They hope their business model will prove as appealing as leasing cars which now accounts for 1.6 million users.

And they are banking on commuters thinking long and hard before paying over £200-a-month for a zones 1-4 Travelcard. 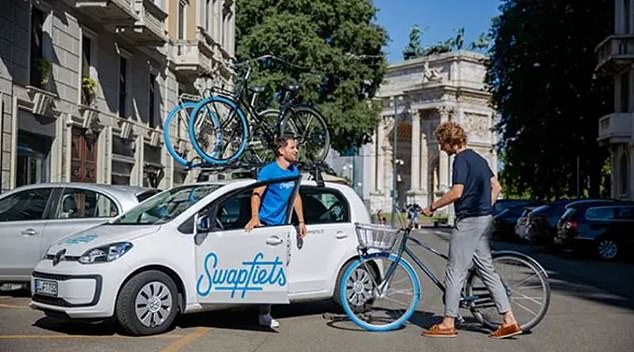 Swapfiets has already seen more than 220,000 people sign up across nine European countries

Any repairs can be organised within 48 hours and are included in the monthly fee and if the bike is seriously damaged or stolen, then it will be replaced.

One online reviewer from Berlin said: ‘It makes bike ownership very simple. It is all the little things that add up with owning a bike and make people inconsistent at using them.

‘You have to have working lights, you may want a seat for your child, or a basket for your shopping and they make all those things very easy.

‘As someone who wants to save money and get fitter, with this method you get on with the bicycling and become more consistent.’

Swapfiets also have some serious green credentials. Every part of the bicycle is designed to be easily repaired, replaced or recycled, extending the product’s life cycle and eliminating waste. Their aim is to create 100 per cent circular bikes by 2025.