Once a derelict substation full of cows, Trevolt is now a stunning tower featured on TV

When buying a doer-upper, being able to see its potential is key. But when said doer-upper has its ‘doors and windows blown in by the wind, and cows roaming through it’ – well, seeing the potential must have been a stretch.

‘It was an austere shell,’ admits interior designer Abi Ward of the electricity substation tower in Nancledra, near St Ives, that she and her husband Morv have turned into a three-storey, three-bedroom home and now share with their whippets Wilf and Daphne.

In fact, the substation tower, which they bought from a farming family in 2019, was such a huge project that their families and even George Clarke (the property appeared on his Channel 4 show Remarkable Renovations earlier this year), thought they were ‘mad’ for taking it on. ‘I get it,’ laughs Abi. ‘It didn’t even have a track to access it. But we saw it as a chance to turn a rough diamond into a family home.’

Named ‘Trevolt’ by the couple – ‘tre’ means homestead in Cornish, ‘volt’ refers to its former history – the substation tower was built in 1910 and provided electricity to nearby towns. It had been derelict since the 60s, when the electricity system became automated. Abi and Morv certainly had their work cut out to restore it.

Abi and Morveth Ward (pictured) took on a challenging renovation project, transforming the property they bought in St Ives 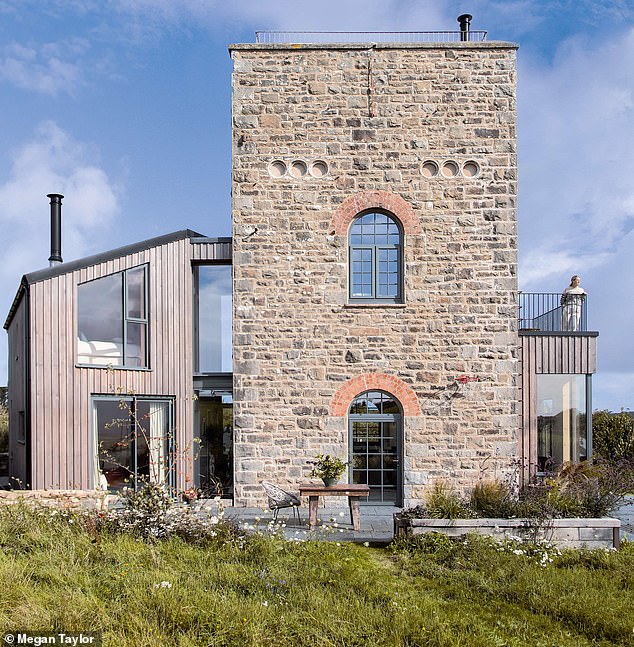 Abi looks out from the terrace. An extra floor was added to the tower, plus wood-clad rear and side extensions, all linked to the original building by a glass section 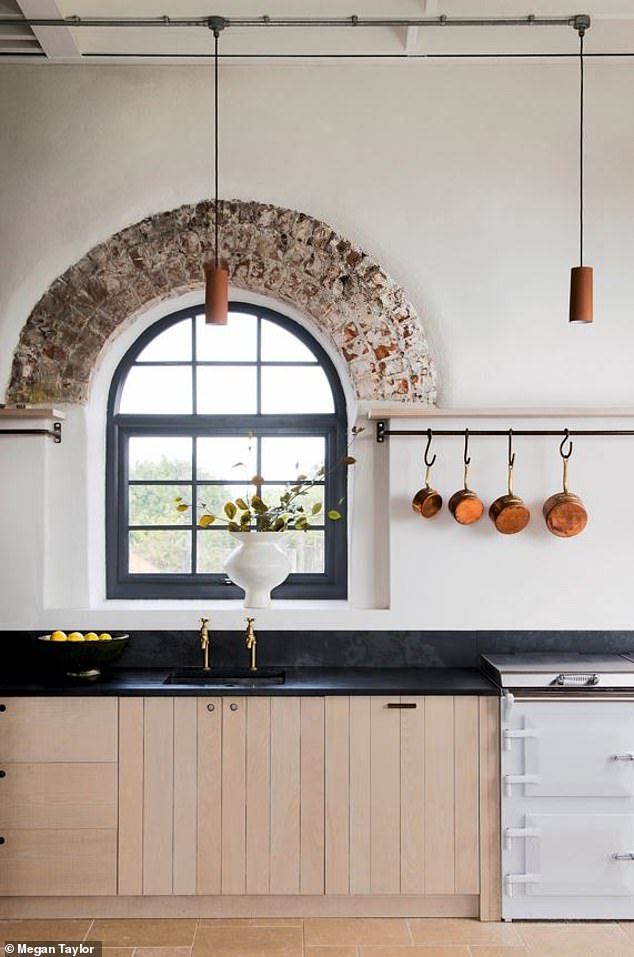 For an industrial feel, a slate worktop was added to the wooden kitchen by devolkitchens.co.uk. The lights are by handand eyestudio.co.uk. The antique copper pans were a gift from Abi’s mum

Apart from moving the cows, the first major must in their £350,000 renovation project was removing the reinforced concrete flooring that divided the tower into two levels. ‘It was a huge threat to its structure and many builders refused to touch it,’ says Abi. But it allowed them to add an extra 80 square metres to the existing floor plan. ‘In the end it was worth it.’

Other major structural works included making it three-storey and adding wood-clad side and rear extensions.

As for inside, Abi – who cut her design teeth transforming a horse box into a glamping station and renovating a cottage for herself and Morv – saw every surface as a texture opportunity. The resulting interiors are a warm mix of rustic and modern pieces.

Most people finish their building works before hunting for furnishings. Not Abi and Morv. ‘We trawled antique fairs, reclamation yards and car-boot sales, looking for unique quality pieces from the start. Whenever we found something we loved, we bought it – and worried about the storage situation later.’ 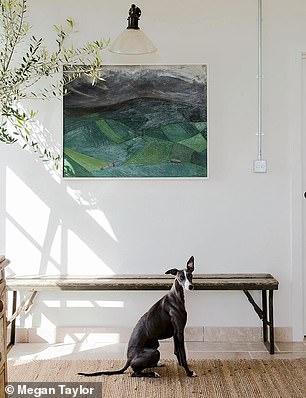 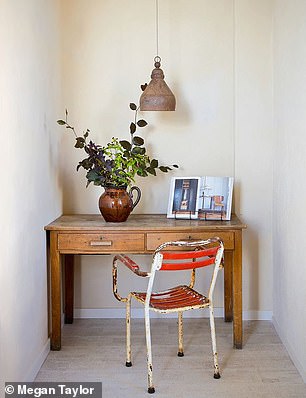 Left: In a quiet end of the kitchen, Daphne the whippet poses by a painting of the original substation tower. The bench is from tobysreclamation.com. The runner is amara.com. Right: The stylishly distressed chair was an antiques fair find. For similar try birchandyarn.co.uk. The book – The Kinfolk Home – is Abi’s go-to ‘for inspiration for upcoming projects’ 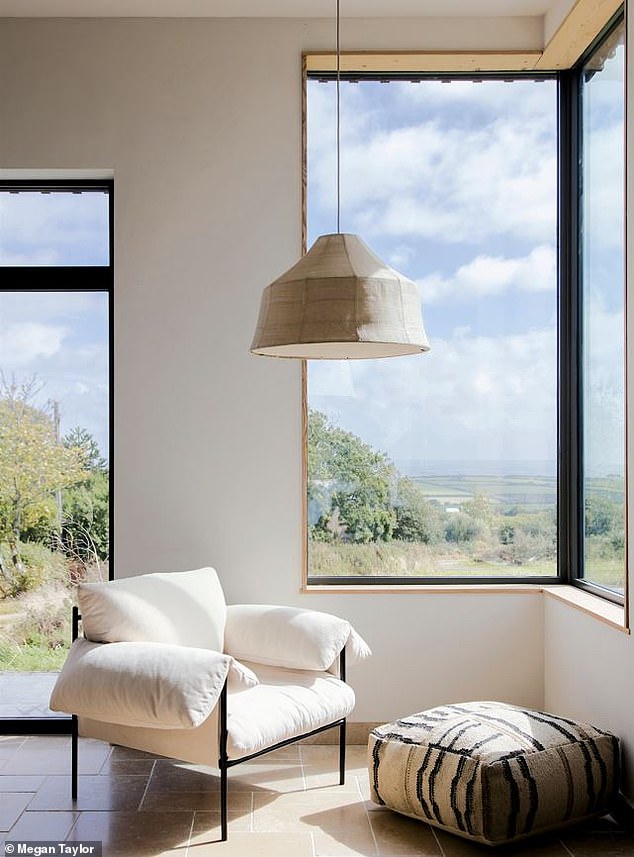 Throughout the house Abi kept an earthy palette, using organic colours from earthbornpaints.co.uk that reflect the surrounding landscape. Chair by sixtheresidence.co.uk

Among their finds were marble sinks picked up for £50 from Facebook Marketplace, and distressed pendant lights sourced from an antiques dealer for £35. The pièce de résistance? A painting of the original substation tower that Morv snapped up for £180 (original gallery price £1,000) at a local auction house, which now hangs in the kitchen. ‘That one was fate,’ he smiles.

Colour-wise, Abi chose soft shades of cream, caramel and putty to act as a foil to the outside greenery. ‘I wanted the tower’s views to do most of the talking,’ she says, ‘so I kept the interior scheme pared-back and punctuated quieter areas with flashes of copper or a twinkle of glass.’ 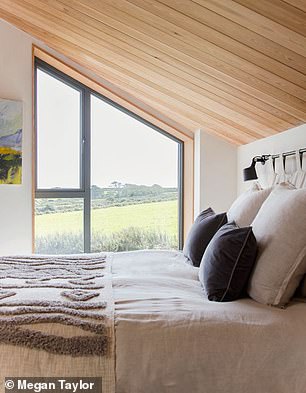 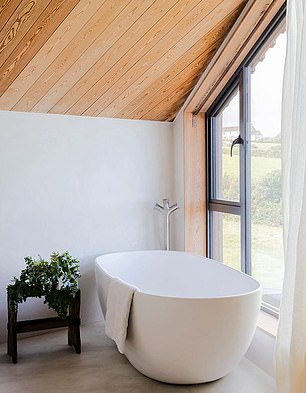 Left: ‘We loved the dynamic the slope added to the building’s straight lines,’ says Abi of her bedroom’s angled ceiling, which was a key part of the design. Right: The perfect spot from which to enjoy the moorland views? The deep bath by bcdesigns.co.uk

Alongside her touches, the substation’s industrial history is honoured in every detail. The brickwork windows that frame the far-reaching views, the exposed beams and joists, lime-washed walls and bare pipework all give reminders of its heritage.

‘The substation will always be a piece of our home,’ says Abi, as everything excavated from the original building was repurposed for the renovation. The track leading up to the property is a case in point. It’s made from recycled aggregate from the original tower, with even the redundant electricity pylons repurposed to create a garden fence. ‘It’s the little things that make Trevolt Trevolt,’ says Abi.