Once it had tobacconists and ironmongers. Today it has vape shops and coffee bars

Britain’s high streets once boasted a cornucopia of independent shops where you could buy everything from starched white collars to a butchered half pig.

But as these historic pictures reveal, the drapers, tobacconists and butchers with meat hanging in the open air are long gone.

These photos — charting the changing face of the High Street in Lewes, East Sussex, between 1860 and 1960 — are on display in the town as it encourages people to shop locally. And while some of the shop fronts still look familiar, Lewes, like virtually every town centre in the land, has undergone seismic changes as our shopping habits have changed beyond recognition over more than a century.

From papers to charity bargains

In 1953, when this photo of Sanger’s was taken, Lewes had no fewer than nine newsagents. Now, like so many towns, it has many a charity shop, encouraged by tax breaks and rate reliefs, so people can browse for second-hand clothes and trinkets instead of newspapers and stationery. 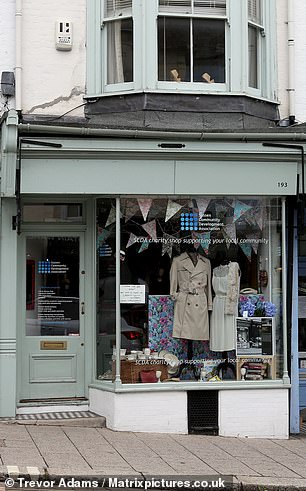 From prime cuts to parking spots

Vegans beware! In 1906, Mr Watford the butcher had no qualms about hanging his freshly plucked chickens above his shop doorway, while signs promised his hungry shoppers local steak and ‘fat hog’. That thriving little shop has now gone the way of all flesh. Today, the site is a rather bleak car park. 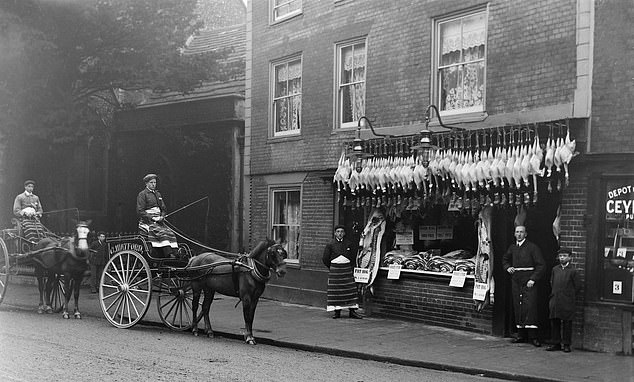 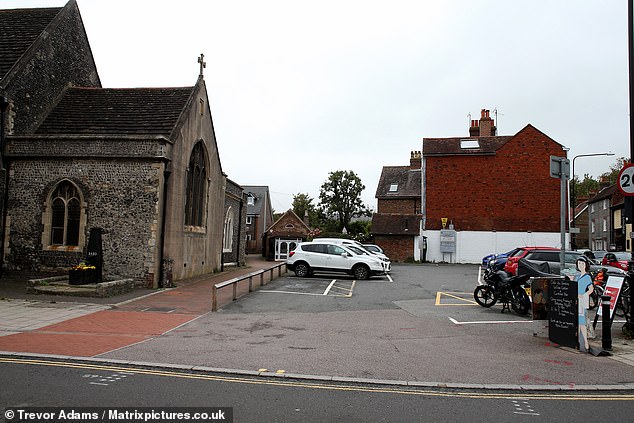 The view today is a car park in its place to serve the shoppers in the town of Lewes, East Sussex

In 1895, smart men and women admired the delicate fabrics and starched white collars laid out by draper Charles Thompson. Today, the scene is less impressive. A smaller shop, itself for sale, hawks cast-offs including old chairs and a plastic tricycle. 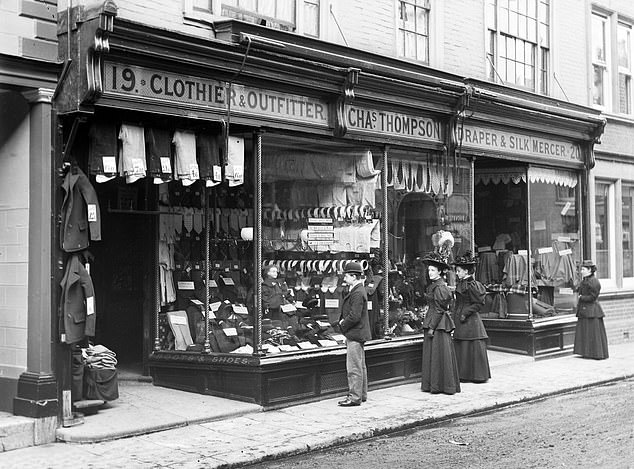 Draper Charles Thompson was a fixture on the high street in 1895. Smart men and women are seen admiring the delicate fabrics and starched white collars 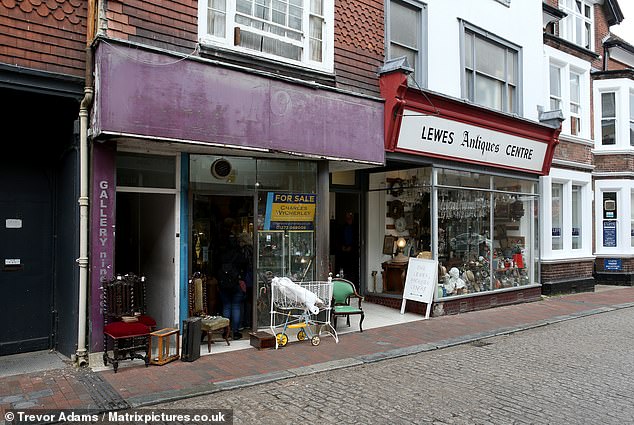 Customers in 1935 popped into the splendidly arrayed ironmonger Lowdell & Cooper to buy everything from bath tubs to nuts and bolts, and paint to paraffin cookers. Today, their descendants can expect a somewhat frothier range of wares: lattes and cappuccinos amid the bright lights of Caffe Nero. 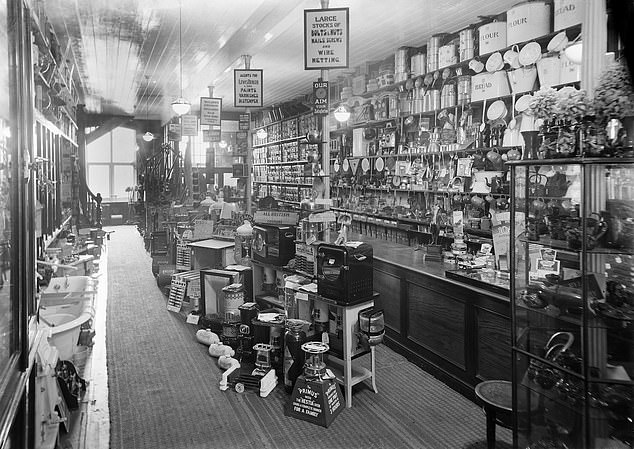 Lowdell & Cooper interior shop pictured in 1935. Customers could purchase everything from baths tubs to nuts and bolts 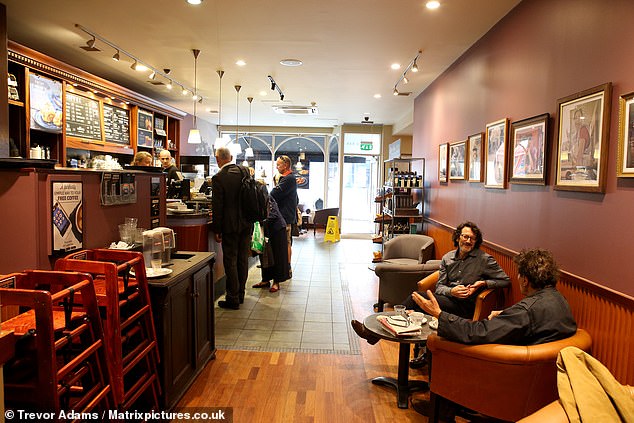 From ciggies to vapes

In 1906, when this photo was taken, a family of three ran Mr Moorey’s tobacconist and newsagent, proudly selling goods including postcards and cigars. Today, the site emerges from the cloud of history to host — ironically — yet another of the vape shops found on almost every high street in the country. 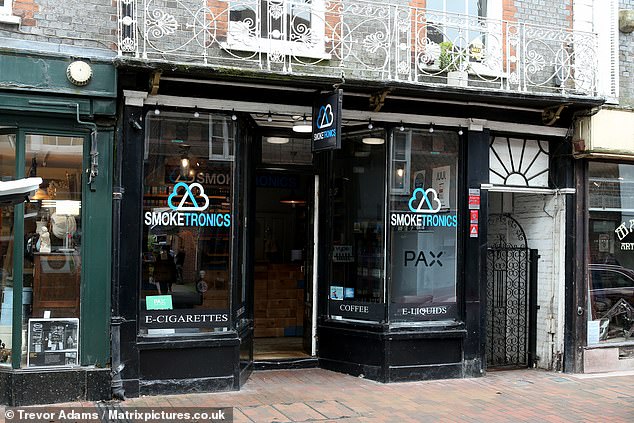 The shop is now a Smoketronics vape shop selling e-cigarettes, e-liquids and coffee

The magnificent shoe display in the window at Russell & Son in 1880 shows how the owners put their pride into their business, charging 2s 11d (£9.65 in today’s money) for a pair of smart court shoes. Today, that British spirit of get up and go has been ceded to a no doubt useful — if rather less impressive — information centre. 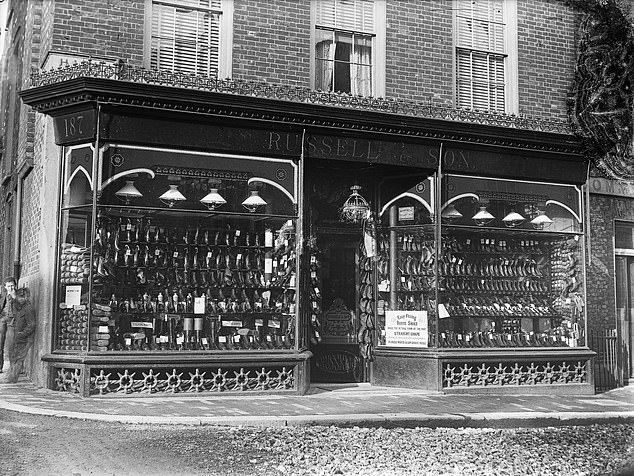 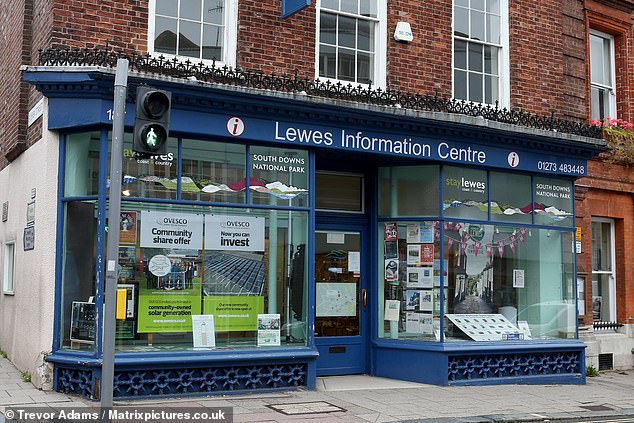 From bank fraud to a court

Farrow’s Bank, one of the first in England to pay interest on deposit accounts, closed in 1920 after its founders were discovered to have committed fraud, losing the life savings of thousands of people.

Now, the once-handsome building is the Lewes Court House. 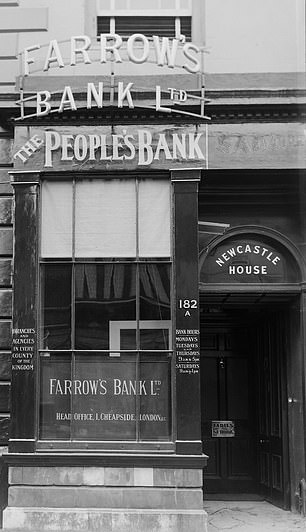 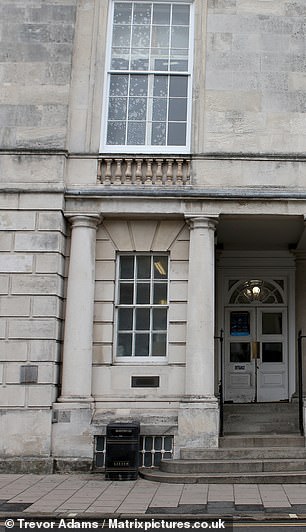 Farrow’s Bank was formed in London in 1907 and was the first to pay interest on deposit accounts (left). The once handsome bank building is now home to Lewes Court House (right)