One dead after bus carrying Texas students crashes into ravine

A bus carrying Texas high school band members home from Disney World has plunged into an Alabama ravine, killing the driver and injuring many passengers.

About 45 people from Channelview High School were on board the bus when it plunged down a 50-foot ravine in the middle of Interstate 10, about 20 miles east of Mobile, early Tuesday morning.

The band members were on their way home from a spring break trip to Disney World at the time. It was one of two buses transporting the students back to Texas.

First responders had to use ropes to rappel down the ravine to reach the injured and then use equipment to cut out them out.

Authorities confirmed the driver had died, while one person was in a critical condition and at least five others were seriously injured.

All of those on board were taken to 10 hospitals in Alabama and Florida, either by helicopter or ambulance, to be checked out or treated.

A photo posted on the band’s Facebook page just hours before the crash showed a large group posting outside Disney World.

Authorities said the bus entered the median and then plunged into the ravine at about 5.30am but it wasn’t immediately clear why.

Footage of the wreckage shows the crumpled bus on its side, far below the pavement.

The interstate was closed down in both directions as the injured were rushed to the various hospitals. 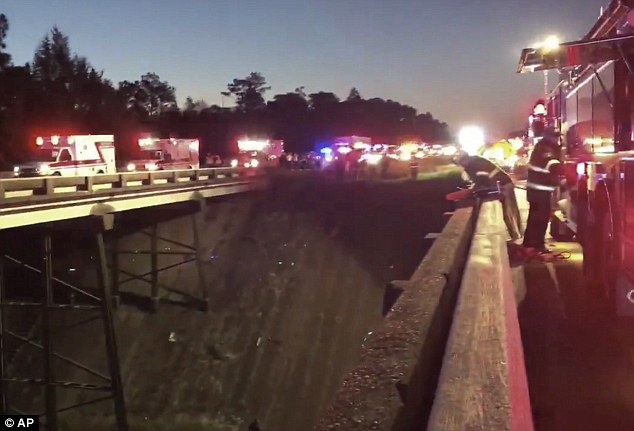 About 45 people from Channelview High School were on board the bus when it plunged down a 50-foot ravine in the middle of Interstate 10 at about 5.30am 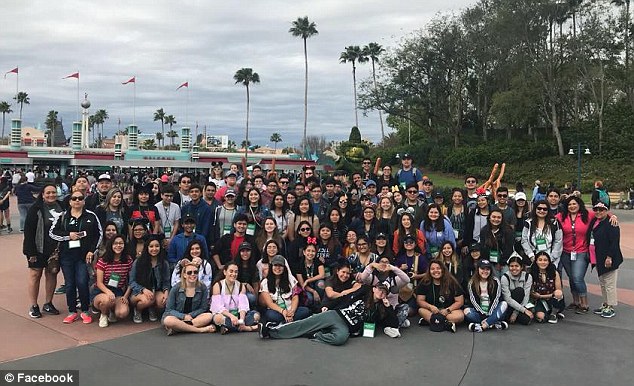 Jesus Tejeda said he came upon the scene while driving to work and found dozens of police cars and ambulances stopped on the highway near the overpass.

He said he looked down to see the bus lying on its side near the base of a concrete embankment, its front end crumpled.

Tejeda said he watched four people being removed from the wreckage and couldn’t hear any yelling or sounds of panic.

Kramer said the district had only limited details in the immediate aftermath and was in contact with law enforcement in Alabama to get more information.

The bus was being chartered by the First Class Tours of Houston company.