One dead, several injured as 23 vehicles crash on icy interstate highway in Utah

A highway pile-up involving 23 vehicles – including 12 trucks – has killed one person and left another in a critical condition.

The string of related accidents happened at about 7am Monday on westbound Interstate 80 near Echo Junction in the city of Coalville, Utah.

Twelve semi-trucks and two cars were involved in the first crash, according to a Utah Highway Patrol report.

A highway pile-up in Coalville, Utah, involving 23 vehicles has killed one person and left another in a critical condition. Twelve semi-trucks were among the vehicles involved (five pictured above after the crash)

This caused four more crashes within a half-mile span.

The driver of one of the semi-trucks, 61-year-old Oscar Longoria from Missouri, was killed.

An unidentified person in a critical condition was taken to McKay-Dee Hospital in Ogden by helicopter. 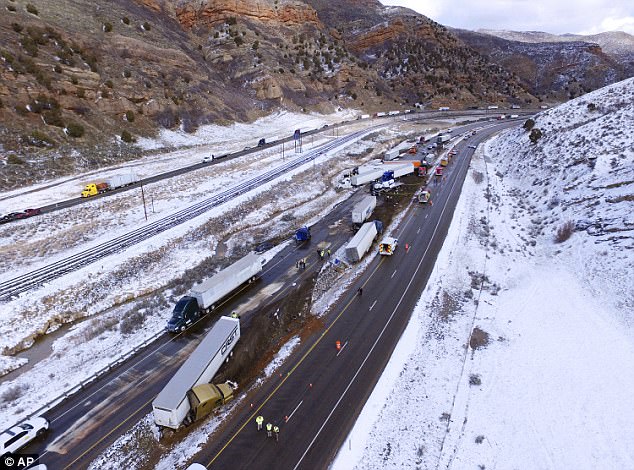 Chaos: The aftermath of the shocking crash which happened at about 7am Monday on westbound Interstate 80 near Echo Junction. Overturned vehicles and debris can be seen littered across the highway

Two others were taken to Park City Hospital with non-life-threatening injuries.

Emergency responders used The Church of Jesus Christ of Latter-day Saints in Coalville to treat 13 others with minor injuries.

A total of seven ambulances and two medical helicopters were reportedly called to the scene and members of the Park City Fire District agency were in attendance.

Icy conditions were reportedly the cause of the pile-up.

Utah Highway Patrol Lieutenant Harley Watkins said: ‘It was a very significant crash. In 18 years, this is one of the worst I’ve ever seen.’

An investigation has been began to determine what happened. 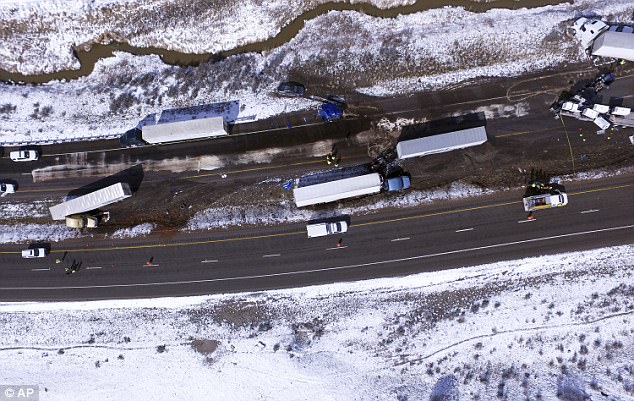 This aerial shot shows some of the semi-trucks involved in the horrific pile-up during the morning commute. By 11am Monday, 125 crashes had been reported in 24 hours

None of the trucks were said to be carrying hazardous material and all lanes have reportedly been reopened since the crash.

Multiple accidents were reported during the treacherous morning commute.

By 11am Monday, 125 crashes had been reported in 24 hours, according to Department of Public Safety officials.