The horsemeat scandal of 2013 sparked outrage among British shoppers.

But despite national outcry, hefty fines and products being recalled throughout Europe, the ‘food fraud’ remains an issue today.

A probe has revealed one in five animal-based products sold in UK supermarkets contain meat that has not been declared on the label.

Cuts to trading standards budgets are said to be allowing cheaper cuts of meat from different animals to pass through the manufacturing process.

This has resulted in ‘ham’ with no traces of pig, ‘lamb’ kebabs with no sheep and pork sausages with bits of beef on our supermarket shelves.

A probe has uncovered one in five animal-based products sold in UK supermarkets contain meat that has not been declared on the label, such as pork sausages with bits of beef (stock)

The Mirror sent out a Freedom of Information (FOI) request to the Food Standards Agency (FSA).

This revealed that out of 69 tests carried out between June 2018 and May this year, 12 products contained ‘unspecified meat or DNA species not declared on the label’.

These animal-based products are being sold at restaurants, in shops and by caters, the information showed.

‘How would you know that the ham in your sandwich is not really ham?,’ he added.

The Local Government Association’s Simon Blackburn told The Mirror cuts to FSA funding has made it ‘very difficult to maintain sampling levels’.

Nonetheless, Which? strategic policy adviser Sue Davies urged the Government to ‘clamp down on food fraud’.

The outrage comes after horsemeat was discovered in processed beef products that were sold in a number of supermarket chains in the UK and Ireland in March 2013.

A number of companies across Europe, including Nestlé, then recalled beef ready meals after tests revealed traces of horse DNA.

Findus lasagne, and some Aldi lasanges and spaghetti bolognese, were even found to contain up to 100 per cent horsemeat. All these products were made by the Comigel food processing company in France.

Health experts insisted this was a case of food fraud, rather than being a safety concern.

The cheaper price of horsemeat, along with supermarkets looking to ‘cut corners’, was blamed.

After the scandal broke, any food manufacturers found to be mislabeling produce faced up to two years in jail and an unlimited fine.

The company was first issued a warning when in June 2014 health officials discovered the product was 80 per cent beef.

Tests in August the following year then revealed it was 50 per cent beef and one per cent chicken.

WHAT WAS THE 2013 HORSEMEAT SCANDAL?

A scandal erupted in January 2013 after horse DNA was found in several beef products in Britain and Ireland.

Frozen food brand Findus was found to be selling a beef lasagna in several European countries, including the UK, which contained 60 per cent to 100 per cent horse meat.

A number of other companies selling ready-made foods were forced to admit that they had unknowingly sold beef products containing horse meat. 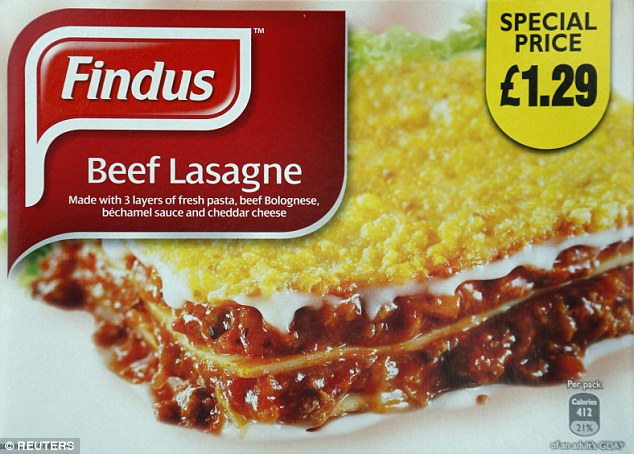 Frozen food brand Findus was found to be selling a beef lasagna in several European countries, including the UK, which contained 60 per cent to 100 per cent horse meat

As a result, supermarkets across the continent pulled millions of suspect food products like canned goulash and lasagna from their shelves.

The horse meat was reported to have originated from a slaughterhouse in Romania, which produced meat for a Dutch company.

Two Frenchmen and two Dutchmen were charged in March 2018 with ‘organised fraud’ after a three-year inquiry into the scandal.