Looking to lose weight? Don’t expect your partner for help.

One in four people has failed a diet because their loved ones led them astray, according to a new survey examining dieting successes and failures of 2,000 Americans.

A surprisingly high number of participants said their diets have come undone because their partners ate irresistible treats and snacks in front of them, ordered tempting take out, and willed them to have drinks.

Weight of love: One in four people has failed a diet because their partners derailed their progress, according to a new survey 2,000 Americans

Responses from the survey conducted by OnePoll in conjunction with Isopure showed that 24 per cent of people blame their partners for derailing a diet.

However, the top reasons people cited for failing their healthy eating resolutions was a lack of time to meal plan, having treats around the holidays, social gatherings, treating themselves, and stress around work.

And while many of the reasons behind people’s dieting failures are legitimate, there are some that appear to be simply based on an invisibility to resist temptation.

Responses showed that 38 per cent of participants have failed a diet simple because they didn’t have the willpower to resist a delicious treat.

Another 32 per cent claim that healthy food is simply too expensive and so their bank account causes them to reach for a less than healthy snack. 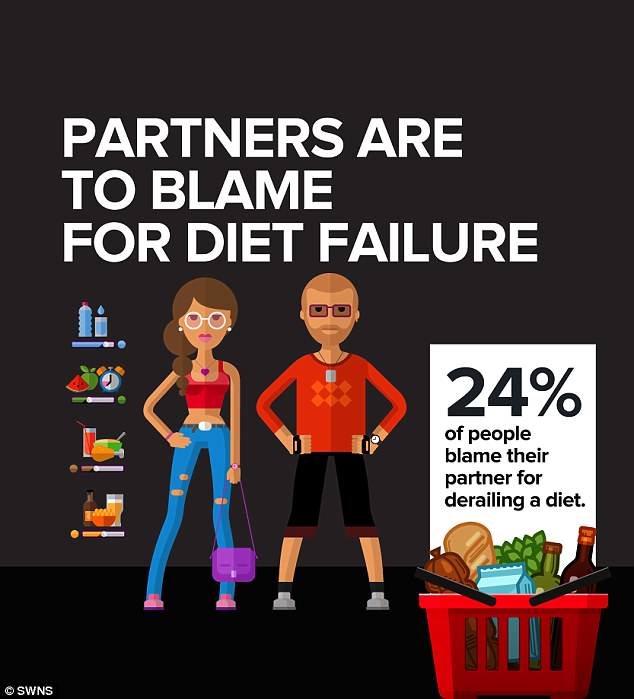 Yikes: A surprisingly high number of participants said their diets have come undone because their partners ate irresistible treats and snacks in front of them 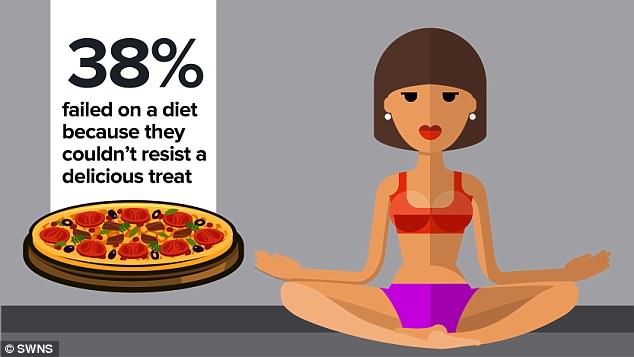 No willpower: Some participants admitted that they failed diets simply because they couldn’t’ resist tempting foods

Reaching for a feel-good-food seems to be a common way for 42 per cent of survey respondents to deal with their stress.

When people choose to abandon their diets, pizza tops the list of foods they want to indulge in, following by ice cream, chips, chocolate, and cookies.

Hard to resist: When people choose to abandon their diets, pizza tops the list of foods they want to indulge in

Meanwhile, Saturday is the day that a diet is most likely to come to a crashing halt for survey participants.

‘A diet plan is only good if you can realistically adhere to it, so it’s key to structure the plan around your specific lifestyle and to build permissive indulgent moments into the plan, like a weekly programmed cheat meal on Saturday night when you know you’ll be around friends and family’ says Isopure General Manager, Jonathan Thompson.

‘Having a diet plan that accounts for your particular social, work, and exercise cadence turns a potential diet derailing moment into a positive and programmed part of your diet that you can actually look forward to and greatly multiplies your chances of staying on plan and achieving your goals.’

After breaking a diet, many admit to feeling disappointed, frustrated, upset, annoyed, and angry.

It’s no wonder that two in five survey respondents get fed up with clothes that no longer fit or look good.

Sleep, fitness, and hydration are just as important as diet, but after failing to follow a healthy eating plan, two in five survey respondents lack the motivation to pursue a healthy lifestyle.

The average American is struggling to get the proper amount of sleep a night – with six hours being the average.

And it’s not just sleep that continues to halt Americans’ attempts at getting healthy. Thirty-four per cent of survey respondents rarely or never even exercise at all. 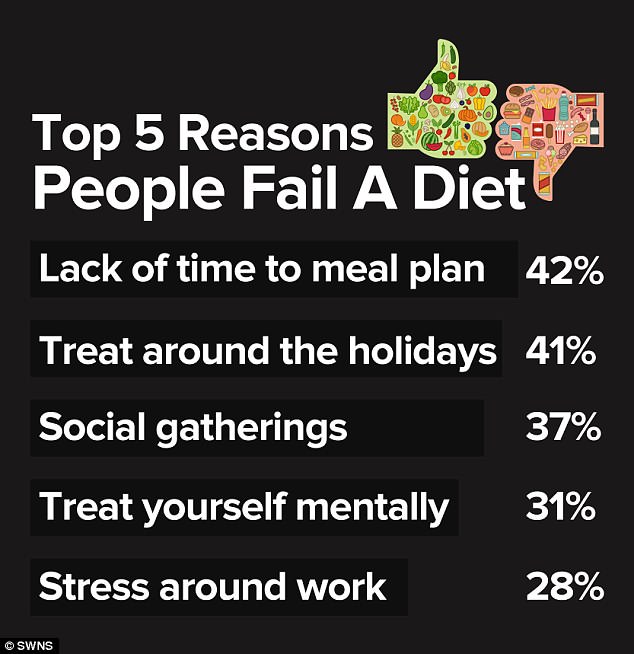 Struggling: A whopping 42 per cent of people said they don’t have time to meal plan 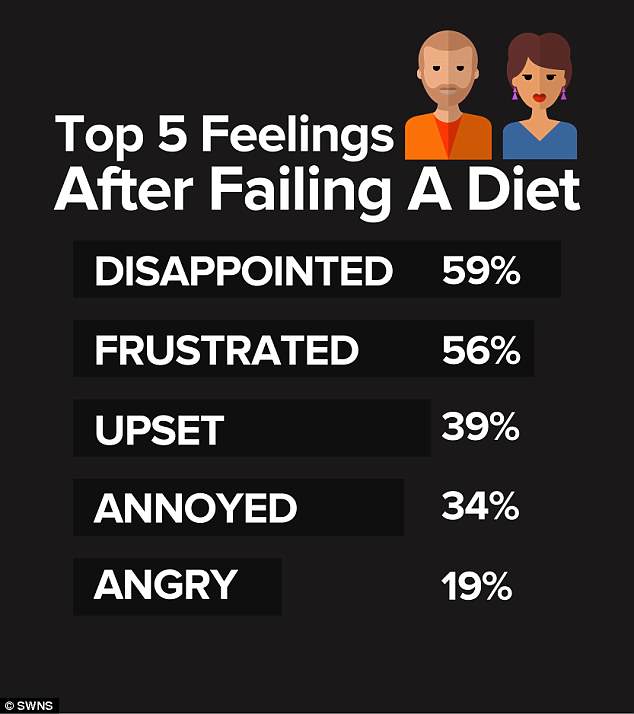 Feelings: After breaking a diet, many admit to feeling disappointed, frustrated, upset, annoyed, and angry

Poor food choices, lack of sleep, and skipping the gym are one thing, but 27 per cent of survey respondents don’t even know how much water they need to consume in a day to stay properly hydrated.

Even if they are aware, 16 per cent report not being able to meet their daily water intake needs.

‘When you dial in the synergistic pillars of nutrition, exercise, sleep and hydration great things happen. Think of each as the leg of the table. Remove even one leg and things can get out of balance,’ Thompson said.

‘One way to get and then stay on point is to keep a journal. It can be as elaborate as detailed notes on how you slept or what exercises you did or it can be something as simple as ticking off boxes against a basic food and water plan.

‘The key is to have a plan tailored to your lifestyle and to hold yourself accountable to the plan in a way that works for you.’