One in four NHS trusts not giving sepsis drugs in time

One in four hospital trusts are failing to give lifesaving sepsis drugs to half of patients in time, despite the latest NHS guidelines.

Fresh guidelines were recently introduced to help diagnose the killer condition, which is notoriously difficult to spot until it has spread throughout the body.

Under revised NHS rules, anyone showing signs of the illness should be assessed and treated within 60 minutes of arriving at hospital.

Yet NHS England figures, revealed on BBC’s Panorama tonight, show that 24 out of 104 acute hospital trusts failed to administer intravenous antibiotics within an hour to half the patients considered to need the treatment.

Health Secretary Jeremy Hunt (pictured) admitted patients are ‘still dying needlessly’ from the disease, which is notoriously difficult to spot until it spreads throughout the body

The statistics also showed that 14 of the trusts failed to spot signs of suspected sepsis in half of patients.

Mr Hunt told the programme: ‘I wouldn’t pretend that we get this right everywhere.

‘We’re on a journey, we definitely need to do a lot better but I think we have made significant progress.

‘There are preventable deaths happening but we’re bringing them down.’

The figures, which date back to 2015, showed ten hospital trusts identified every suspected sepsis case, while six out of ten patients needing antibiotics were getting them within the first hour.

The Daily Mail launched a major End the Sepsis Scandal campaign last year to raise awareness of the devastating illness, which kills 44,000 in Britain every year.

It came after one-year-old William Mead died in December 2014 following a series of errors by doctors and staff.

Known as the ‘silent killer’, sepsis is the leading cause of avoidable death in the UK. 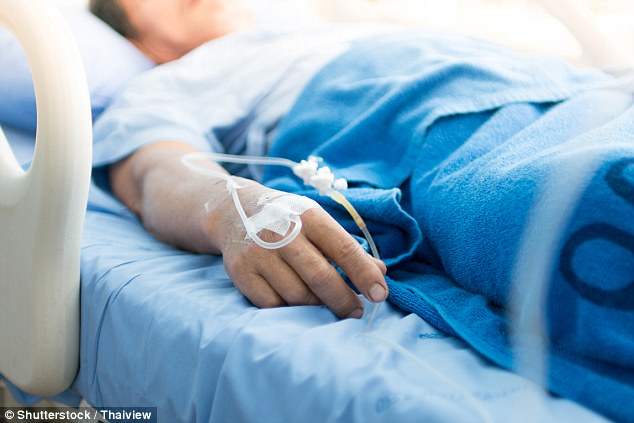 Figures revealed on BBC’s Panorama programme show that 24 out of 104 acute NHS trusts failed to give patients life-saving sepsis drugs within an hour. Picture posed by model

It develops when an infection such as blood poisoning sparks a violent immune response in which the body attacks its own organs.

If it is caught early enough, antibiotics can control the infection before the body’s immune response goes into overdrive.

Indicators in adults and older children include a high or low body temperature, chills and shivering, a fast heartbeat, and rapid breathing.

Parents of children under five should take them to A&E or call 999 immediately if their skin looks bluish or pale or if they are difficult to wake.

BBC reporter Alistair Jackson investigated the issue for Panorama after his mother Margaret showed signs of sepsis before her death three years ago.

Experts told the programme her chances of survival could have been improved if it had been spotted earlier and antibiotics administered.

The show also tells the story of Tom Ray, who has struggled to get any answers since he had all of his limbs and half of his face removed after falling victim to sepsis 17 years ago.

He said: ‘With every minute that the sepsis went undiagnosed I was deeper into that likelihood of ending up with all four amputations’.

Panorama will be shown tonight at 8.30pm, BBC1