More than three million women in the UK take the contraceptive pill but fears of it causing depression and even leading to suicidal thoughts are common.

Two thirds of women taking the pill (66 per cent) admit they don’t actually know what the hormones it contains are doing to their body.

And a quarter of users polled in a new episode of the BBC’s Horizon said taking the contraceptive has damaged their mental health.

A study done in Denmark claims taking the pill increases a woman’s chance of needing antidepressants by 70 per cent, and makes women between the ages of 15 and 19 twice as likely to try and kill themselves.

So TV doctor Zoe Williams, in a new episode of the BBC’s Horizon, has spoken to experts and pill users to dig out the facts on how safe the drug really is.

Dr Zoe Williams has spoken to experts from around the UK and in Denmark to get to the bottom of claims the contraceptive pill is bad for women’s health, exploring its links to breast cancer, blood clots and depression

‘Side effects can range from mildly inconvenient to potentially fatal,’ Dr Williams said in the documentary, which aired on BBC Two last night.

The contraceptive pill was first introduced in the UK in 1961 and works by controlling a woman’s menstrual cycle with synthetic hormones.

In essence, the programme explained, the pill puts the ovaries to sleep, stopping it from releasing any eggs and preventing women from becoming pregnant.

But Dr Williams went on a mission to find out whether changing the body’s hormone balance in this way can have unwanted health effects.

One of the most serious claims is that the pill can cause depression and even lead to suicide attempts – something which has been backed up in theory by studies.

Some 25 per cent of the women in Horizon’s survey of 1,000 18 to 45-year-olds on the pill said taking the drug had negatively affected their mental health.

Vicky Spratt, a 30-year-old journalist for Grazia magazine, used the contraceptive when she was younger and said it made her brain feel ‘mouldy’.

She said: ‘It’s very difficult to know when you’re a teenager whether the emotions you’re experiencing are your own because of your naturally fluctuating hormones or as a result of the synthetic hormones in the pill you’re taking.

‘At that point in your life you don’t have an emotional point of reference.

‘I felt like my brain had gone off, it felt mouldy. I remember thinking if this is what the rest of my life is going to be like, I don’t know if I can live it.’

Ms Spratt said her doctors didn’t think to make the link between her crumbling mental health and the pill, but said she returned to normal ‘within weeks’ of stopping taking it.

Another woman, Danielle, 31, called the effects of the pill on her mental health ‘terrifying’.

Danielle said: ‘I had never experienced any mental health problems prior to that and I went from being fine to having suicidal thoughts within about six months.’

Dr Williams then spoke to a doctor in Denmark who did a study looking at the medical records of 1.8million Danish women taking the pill over a 20-year period.

Professor Ojvind Lidegaard, from the University of Copenhagen, found the pill increased the likelihood of a woman using antidepressants by 70 per cent, from eight in every 100 to 14 per 100.

He said: ‘On average all [pill] users from the start had a 70 per cent higher use of antidepressants compared to never users.

‘When we look at teenagers between 15 and 19 they more than doubled in depression among hormonal contraception users than never users.’

And the risk of attempting suicide increased, too – 15 to 19-year-olds were twice as likely to try and kill themselves if they were taking the pill.

Dr Williams explained there is no scientific evidence to prove the pill was directly causing the depression or suicide attempts, just that there is a correlation.

Contrary to popular belief, contraceptive pills, implants or injections do not make women more likely to suffer from the mental-health condition, the study said.

Lead author Dr Brett Worly said: ‘Depression is a concern for a lot of women when they’re starting hormonal contraception.

‘Based on our findings, this side effect shouldn’t be a concern for most women, and they should feel comfortable knowing they’re making a safe choice.’

The researchers blame platforms such as social media for making contraception complications seem more common than they are.

Dr Worly said: ‘We live in a media-savvy age where if one or a few people have severe side effects, all of a sudden, that gets amplified to every single person.

‘The biggest misconception is that birth control leads to depression. For most patients that’s just not the case.’

The scientists add, however, certain women are at a greater risk of the mental-health disorder and should be monitored closely.

Dr Worly said: ‘Adolescents will sometimes have a higher risk of depression, not necessarily because of the medicine they’re taking, but because they have that risk to start with.

‘For those patients, it’s important that they have a good relationship with their healthcare provider so they can get the appropriate screening done – regardless of the medications they’re on.’

The researchers reviewed thousands of studies investigating the link between contraceptives and people’s mental health.

Such studies included various methods of contraception, including injections, implants and pills.

Participants in the trials were made up of teenagers, women with a history of depression and those who had given birth in the past six weeks.

It isn’t possible to carry out a scientific study using placebo pills, she said, because women would get pregnant by accident.

But she added women don’t have to put up with a pill which harms their mental health – they should speak to their doctor about any concerns.

Dr Williams also explored claims the pill can increase the risk of breast cancer by 20 per cent.

Professor Philip Hannaford, a contraceptive safety researcher at the University of Aberdeen, confirms it can cause a rise of around 20 per cent, but he explained the relative risk and calls it ‘a small increase on a small risk’.

Among women not taking the pill, Professor Hannaford said, scientists expect there to be 55 cases of breast cancer per 100,000 women.

Professor Hannaford explained: ‘This additional risk comes about due to the oestrogen in the pill. Oestrogen can in some cases stimulate breast cancer cells and cause them to grow. But 13 is a low number’.

This extra risk begins to fall back to average levels when women stop taking the pill, Professor Hannaford added.

And the contraceptive can protect against ovarian, endometrial and colorectal cancer, with these benefits continuing for decades after the pill is stopped.

Nearly half (48 per cent) of women in a survey of 1,000 18 to 45-year-olds said they were worried about the increased risk of blood clots caused by the pill.

Blood clots are cause for concern because if they break up and travel to the heart they can cause a potentially fatal pulmonary embolism by clogging up an artery.

But another expert, Professor Roopen Arya, from King’s College Hospital, explained smoking, obesity, and not exercising are all much more likely to cause blood clots than the pill.

And even the one thing the pill is designed to prevent – being pregnant – causes a far larger increase in risk.

While women not taking the pill have an average risk of 20 women out of 100,000 getting a blood clot, this rises to up to 120 per 100,000 among those taking newer versions of the contraceptive.

A misunderstanding of blood clot risk in 1995 led to huge numbers of women stopping the pill.

As a result there were 13,600 extra abortions and a 25 per cent rise in births the following year, costing the NHS an estimated £67million.

Dr Williams explained doctors can identify women who are at high risk of developing blood clots and reduce the danger to their health by changing pills or offering them alternative contraception. 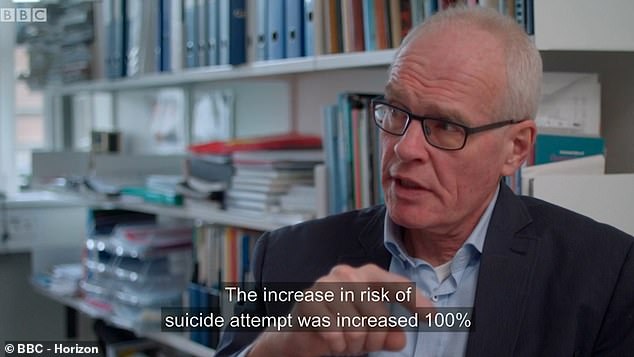 Professor Ojvind Lidegaard, from the University of Copenhagen, found taking the pill almost doubled the use of antidepressants from eight per cent of women to 14 per cent.

The programme also investigated claims the pill can cause women to put on weight, by visiting scientists at Nottingham Trent University.

There, Professor Philip McTernan, head of biosciences, explained hormones can affect fat distribution in the body, but it’s hard to separate the effects of the pill from natural changes.

He said oestrogen and progesterone can increase the number of fat cells in the body, but they were likely only immature cells which don’t lead to weight gain.

And the pill can increase the amount of water a woman’s body retains, which could be seen from the outside as weight gain.

‘[By] being on the pill, you’re changing how much water is retained in your tissue so you’re going to put on what is perceived as some more weight,’ Professor McTernan said. ‘Maybe as much as 2kg.’

He said all types of the pill seem to have the same effect.

And on the subject of gaining fat he added: ‘Studies also indicate that as you age you will also gain more weight so it’s very difficult to tie this specifically to contraceptives.’

The episode of Horizon is available on BBC iPlayer.