One in ten French women have been raped ‘at least once’

By Sara Malm For Mailonline and Afp

More than one in ten French women have been raped at least once in their lives, a new poll has found.

Half of the victims said the rape had taken place when they were children or teenagers.

More than two in five – 42 per cent – of those who said they were victims of rape said they had been attacked in their own home.

Attacked: Half of the women who told French pollsters they had been raped at least once in their lives said the rape had taken place when they were children. Pictured are women marking the International Day for the Elimination of Violence Against Women in Paris, last November

Twelve per cent of the 2,167 women polled by the Fondation Jean Jaures think tank said they had suffered ‘sexual penetration with violence, constraint or surprise’, the legal definition of rape in France.

Five per cent said the sexual assault had happened more than once.

Of these, 31 per cent said they were raped by their partner, 19 per cent by someone else they know and only 17 per cent by a stranger.

Only 15 per cent had filed an official complaint but many remained traumatised by the incident, as evidenced by the fact that a fifth of them had attempted suicide – four times the general rate among French women.

The online poll was carried out by Ifop between February 6 and 16 and questioned women aged 18 and over. 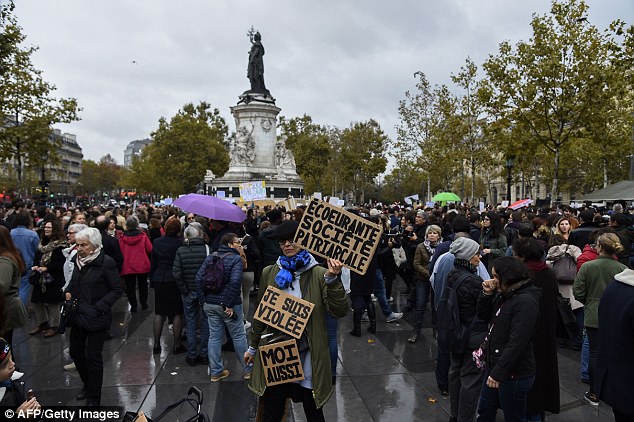 A woman holds placards reading ‘Disgusting patriarchal society’, ‘I am raped’ ‘Me too’ during a gathering against gender-based and sexual violence in Paris in October

The Fondation Jean Jaures said some of the respondents may have been encouraged to break their silence by the tide of accounts of sexual violence shared on social media in the wake of the sexual assault scandal sparked by revelations about Hollywood mogul Harvey Weinstein.

Last month, France’s interior ministry said the reporting of sexual assault and rape had risen 31.5 per cent in the last quarter of 2017 compared with the same period in 2016.

‘One can see the effect of reporting of possibly older incidents in the context of women speaking out following the revelations of the ‘Weinstein’ affair,’ it said.