Over a third of UK restaurants (34 per cent) fear that they won’t survive until Christmas.

That’s according to a new survey of 200 restaurant and decision-makers that also found that a similar number (32 per cent) believe that government support for the industry is inadequate.

Tanisha Broady, owner of the Rock of Virtue Café in Cambridge, told MailOnline Travel that for her business to stay afloat for the next three months, she needs £10,000 from the government to cover rent.

Rahul Sharma, Director at The Regency Club in London, also voiced concern about government support for the sector.

He told MailOnline Travel that he received £3,000 for each lockdown in the form of government grants and ‘the Furlough scheme helped a lot’.

But he added: ‘The biggest expense for us is our rent – our business model is designed to operate as a restaurant, but now we are operating as a takeaway. So, we are still paying the overheads of a restaurant. There needs to be something done for people who pay high rent. There has not been any agreement done on a wider commercial basis.’

Chris Jones, owner of the Naked Deli in Newcastle, said: ‘This year has been all about survival. We’ve been looking from week to week hoping we can keep the lights on and staff employed.’

She said: ‘The sector’s preference is to trade itself back to recovery but, with restrictions denying us the chance, many venues will fail unless the government provides much more substantial support.

‘The restrictions of the new tiers mean that 94 per cent of our members are nonviable or trading at a loss. That’s a £7.8billion hit which will see businesses go under and jobs lost.

‘For any chance of survival, we need replacement of the Job Retention Bonus, extension of the rent debt moratoria and compensation for business losses. Tesco has just refunded nearly £600million in support to the government, with other supermarkets rumoured to be following suit. That can be used to establish a Hospitality and Tourism Recovery Fund to keep the sector alive.’ 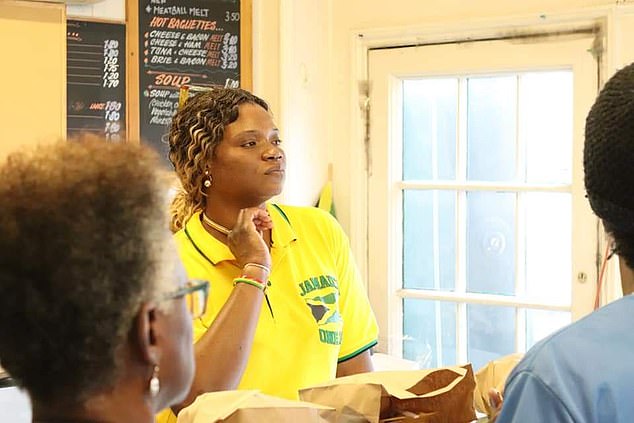 Tanisha Broady, pictured, owner of the Rock of Virtue Café in Cambridge, told MailOnline Travel that for her business to stay afloat for the next three months, she needs £10,000 from the government to cover rent

Peter Backman, a UK-based independent restaurant analyst, also issued a warning: ‘Restaurant owners have not faced any years tougher than this. Sadly, just making it to 2021 will be an achievement for many. We’re not out of the woods yet. The pandemic is still not over and the economic conditions in January and February could be even harsher for restaurants, not least if we remain in restrictive tiers.’

During the pandemic, many restaurants were quick to pivot to online delivery, with the average restaurant taking just two and a half weeks to implement a takeaway service once lockdown was announced, according to online food delivery platform Flipdish, which commissioned the survey, by Censuswide.

In fact, over half (56 per cent) say they would have closed down permanently without online ordering and takeaway. According to restaurant owners and managers, the pivot saved an average of 15 jobs. 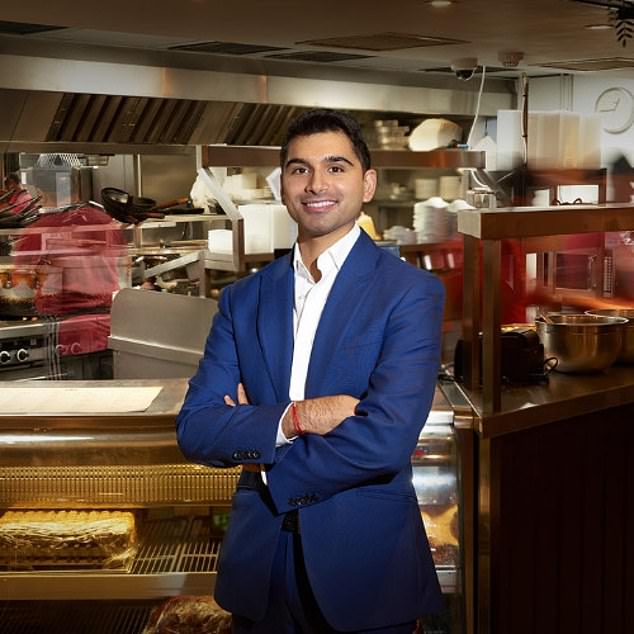 Rahul Sharma, pictured, Director at The Regency Club in London, said ‘there needs to be something done for people who pay high rent’

As lockdown restrictions ease, 79 per cent of restaurants plan to continue with online delivery, but the long-term picture is fragile.

According to the survey, 78 per cent of restaurants signed up to ‘aggregators’ like Just Eat, Uber Eats or Deliveroo, so-called because they collate restaurants on the same platform.

This year has been all about survival. We’ve been looking from week to week hoping we can keep the lights on and staff employed

Over 12,000 new restaurants have joined Deliveroo in recent months and many would have benefitted from Just Eat’s 30-day support package in March when more than £11million of support was funnelled into independent restaurants.

However, while signing up to aggregators works for many businesses, for some, it’s not a long-term solution.

The commission charged – up to 35 per cent – can be one of the issues, though individual deals can be hammered out, as the aggregators explain.

Criticism of the cut taken by the likes of Just Eat, Deliveroo and UberEats was first reported by the Mail in June – and it’s still bubbling away.

In the survey – which it should be pointed out was commissioned by a rival to aggregators – only one in three (33 per cent) restaurants felt aggregators set fair commissions and offered a financially sustainable option.

Tanisha pointed out, for example, that for a £41 order she took recently, £17 went to Deliveroo.

Rahul, meanwhile, revealed what his restaurant would end up with after using Uber.

Uber collects £11.50 from the customer and the restaurant gets £14 revenue from Uber.

On top of this are costs – £.3.40 VAT for the whole order, and £8 operating and fixed costs (ingredients, labour, restaurant rent and utilities and so on), leaving £2.60 gross profit. 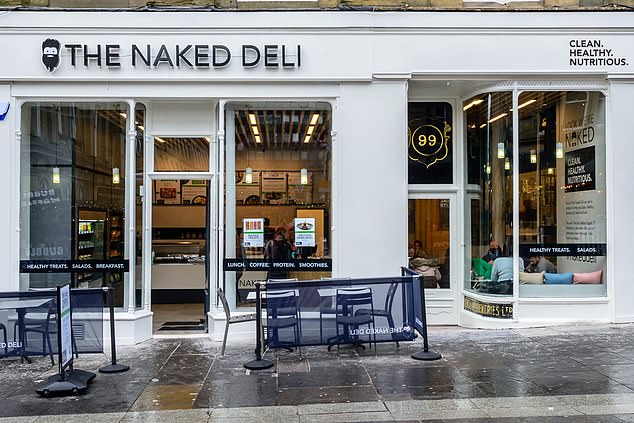 Chris Jones, who runs The Naked Deli, said that 2020 has been all about survival for his outlet

Ryan Lynch, who runs Dough restaurant in Liverpool said that with Just Eat the commission is 14 per cent, plus VAT, without using their delivery service, and 33 per cent plus VAT if you use their drivers.

These case studies were put forward by Flipdish. But MailOnline spoke separately to one buyer, who wished to remain anonymous, working for a London restaurant who echoed the anguish regarding fees expressed above.

He said that his business does use Deliveroo and admitted it had been a lifeline during the lockdown – ‘we relied on its customer base’ – but added that the 32 per cent commission his business is charged is ‘pretty crippling’.

Flipdish points out that it has a much lower commission rate – typically around seven to nine per cent – and is also involved in the ‘Go Direct Coalition’, a group that’s encouraging the nation to order directly from restaurants, cafes, pubs and takeaways, so they can keep as much of their revenue as possible.

Another example of a restaurant business that’s ploughing its own online furrow is London’s Shop Cuvee.

Co-owner Max Venning told MailOnline: ‘We handle our own deliveries. With our own couriers we can ensure a better service. We’re employing people from restaurants and bars who are out of work, which was important to us.’ 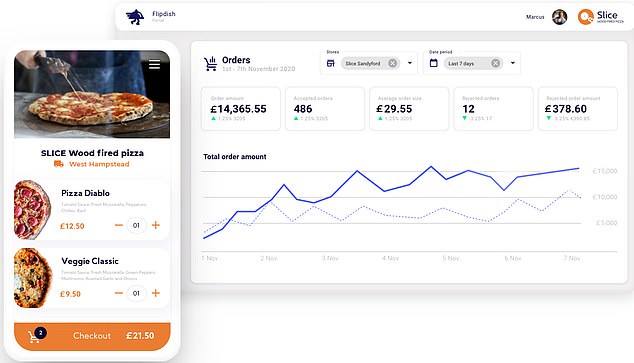 Flipdish is involved in the ‘Go Direct Coalition’, a group that’s encouraging the nation to order directly from restaurants

Fionn Hart, UK Country Manager at Flipdish, said: ‘Nearly half of restaurants that pivoted created their own apps and websites. By doing so, they have created a sustainable business model that will enable UK restaurants to recover, then revitalise.’

Deliveroo said in a statement: ‘Deliveroo is a company founded on a love for small, independent restaurants and our absolute priority is supporting their businesses, especially during Covid-19. We are proud that we help them reach new customers and boost their sales through delivery. Over 12,000 new restaurants have joined Deliveroo in recent months, 9,000 of which are small restaurants and since March our smaller restaurant partners have recorded record growth.

Deliveroo charges different levels of commission depending on each individual arrangement with a restaurant partner. This is then reinvested back into our business

‘Throughout the Covid crisis we have invested millions in our restaurant partners, helping them increase their sales and creating new products and campaigns to support both their dine-in and delivery businesses.

‘Deliveroo charges different levels of commission depending on each individual arrangement with a restaurant partner. This is then reinvested back into our business, paying for riders’ fees, customer services and upgrading our services for restaurants.’

Just Eat said: ‘Just Eat is only successful if our restaurant partners are successful. We believe our commission rates are aligned with the value we provide to our partners and we have a track record of helping restaurants prosper.

‘Since the start of the pandemic, we have given well over £11million worth of support to the many thousands of independent restaurants we work with through a number of support measures including commission rebates on delivery and removal of commission on collection orders. We continue to look at measures to support our restaurant partners through further periods of closures and restrictions.

‘We’re committed to adding value to our partners’ businesses on a daily basis, and many grow and flourish through working with Just Eat.’

Uber Eats said: ‘We are committed to supporting restaurants and the thousands of people who rely on them for work and as an essential service during this difficult time. At the beginning of the crisis, we put in place a range of initiatives to help restaurant partners, particularly small business owners, as they keep their kitchens firing to feed people across the country.’

MailOnline approached the Treasury for a comment, but none was forthcoming.