One injured in new Austin explosion in SEVENTH device in bombings

An explosion has been reported in Austin, Texas on Tuesday night, with one male in his 30s transported to the hospital with unknown injuries.

The explosion occurred at a Goodwill thrift store on Brodie Lane in southwest Austin, officials said.

The explosion was reported at around 7.10pm local time and officials advised more information would be forthcoming.

Austin Police, fire crews and paramedics responded to the scene.

It is the seventh explosive device to hit the city this month, including one that exploded and another that was intercepted in two FedEx processing facilities on Tuesday morning.

Earlier Tuesday, police in Austin confirmed that an unexploded package bomb intercepted in a FedEx facility this morning was linked to a string of deadly bombings to rock the city this month.

Cops responded to a call of a suspicious package at a FedEx facility near the Austin-Bergstrom International Airport at 6.19am on Tuesday, where bomb squad officers isolated the device.

The device, as well as another one that exploded on Tuesday morning in a San Antonio FedEx facility, injuring one, are in fact linked to four prior explosions in Austin that have killed two and injured several, police said in a joint statement with the FBI and AFT.

Police believe the packages were sent from a package store in the tiny Austin suburb of Sunset Valley, and officers were seen descending on the store Tuesday.

They swabbed the handles of the doors for explosive traces and were seen gathering bags of evidence from inside the store. 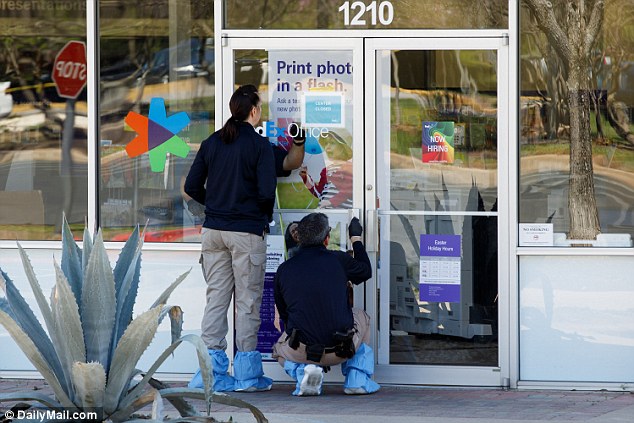 The Sunset Valley store was closed and cops put up yellow tape and cleared parking lots, though they do not believe there are any dangerous packages still insid 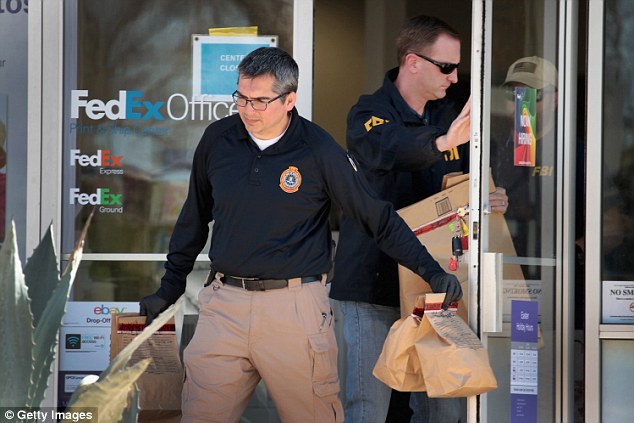 FBI agents collect evidence at a FedEx Office facility in Sunset Valley on Tuesday. Cops believe an unexploded package and one that exploded in a processing facility were sent here 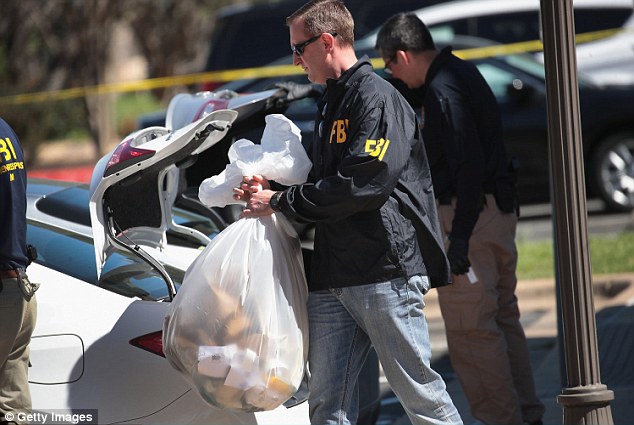 FBI agents collect evidence at a FedEx Office facility in Sunset Valley following an explosion at a nearby sorting center. A package, reported to have been shipped from this store, exploded while being transported on a conveyor shortly after midnight this morning in Schertz, Texas 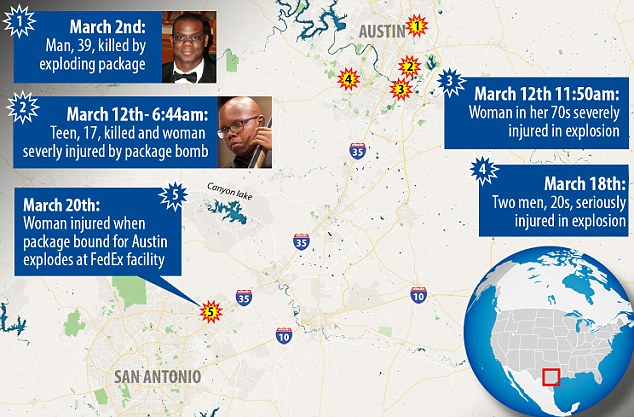 Bomb squads at the facility near the Austin airport were said to be examining the package carefully to attempt opening it without detonating the device.

The latest developments come amid high tension throughout the city, with police receiving 420 suspicious package calls between 8am Monday and 8am Tuesday, bringing the total to 1,257 calls since March 12.

‘There seems to be no rhyme or reason or pattern to the bombings, which makes it even more unnerving,’ said Paula Bonick, 44, a senior business advisor for an Austin firm.

Because four of the five devices were parcel bombs, Bonick has asked her relatives to let her know if they are sending a package so that she is not caught off guard. The arrival of a FedEx or UPS truck at work instills both anxiety and empathy for the drivers.

The fourth device to detonate, which came on Sunday night, was activated by a tripwire. Two white males aged 22 and 23 were seriously injured but survived.

Earlier on Tuesday morning, the wounded employee in San Antonio was taken to a hospital after suffering a mild injury in the explosion at the distribution center in Schertz, about 65 miles south of Austin, shortly after midnight.

The package detonated as it was moving from one conveyor belt to another and the female staff member, who was not hit by the contents, was treated after she reported feeling ringing in her ears.

Texas Attorney General Ken Paxton told the KXAN TV station that the bomb had been mailed from Austin and was addressed to a home in Austin.

Authorities say a ‘serial bomber’ is at large and have warned that the devices appear to be getting more sophisticated. 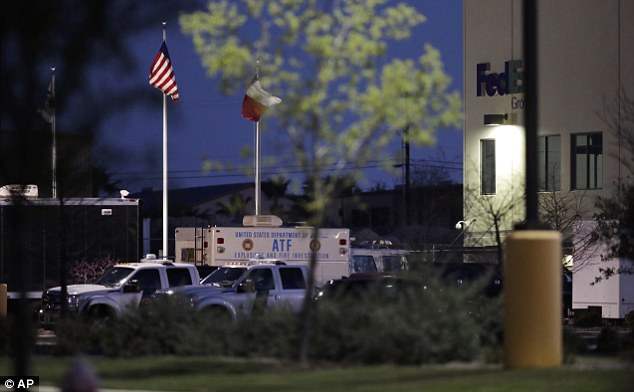 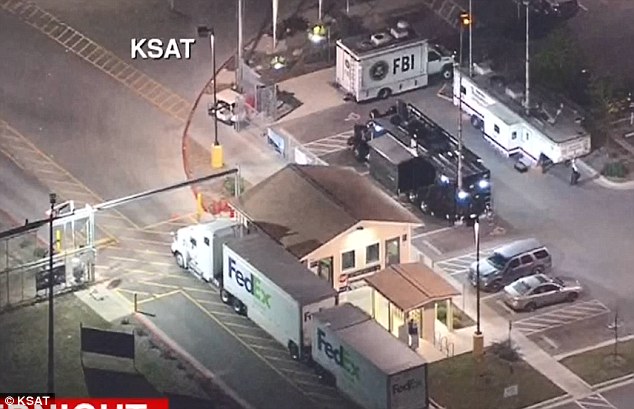 The package at the FedEx facility (pictured above) detonated just before 12.30am, and the female staff member was treated in hospital for a headache, possibly caused by a concussion

The package in San Antonio contained shrapnel made up of ‘nails and pieces of metal’, CBS Austin reports. About 75 people were working at the facility at the time of the explosion.

The latest blast follows a Sunday night explosion that was triggered along a street in Austin by a nearly invisible tripwire, suggesting a ‘higher level of sophistication’ than agents saw in three early package bombs left on doorsteps.

It means the carnage by the serial bomber that has terrorized Austin for weeks is now random, rather than targeted at someone in particular.

Authorities don’t appear closer to making any arrests in the five bombings, though the unexploded device recovered on Tuesday may provide valuable forensic clues. 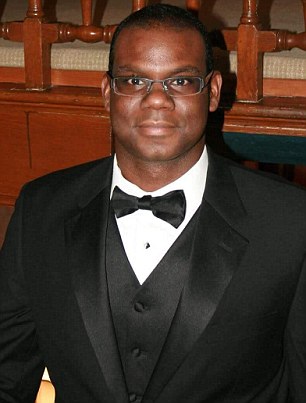 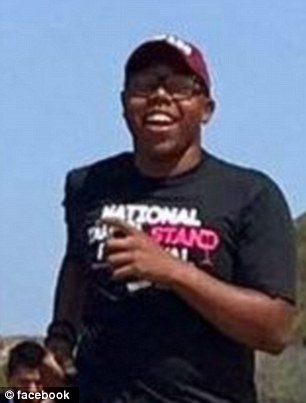 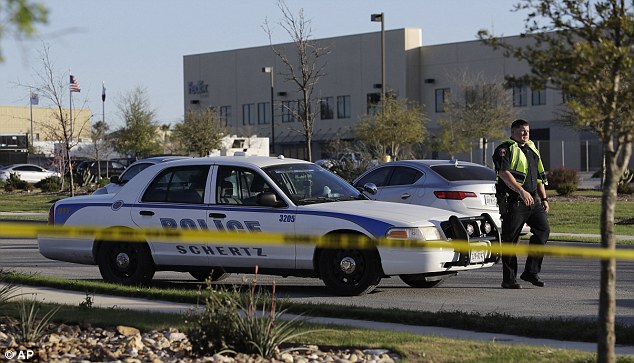 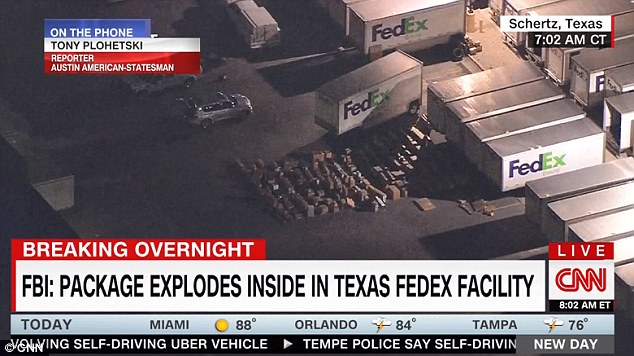 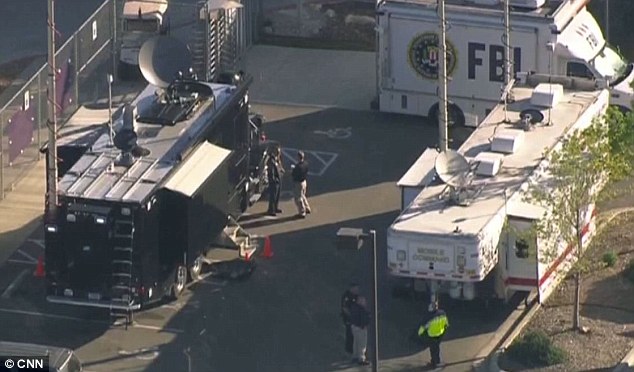 The package detonated as it was moving from one conveyor belt to another and the female staff member was treated for a headache, possibly caused by a concussion

The trip wire explosion forced police to warn nearby residents to remain indoors overnight on Sunday as investigators looked for links to the three other package bombings in the city.

Police have still been unable to determine a motive for the string of bombings, which have killed two people in Austin and put the city of nearly two million on edge.

‘We’re clearly dealing with what we expect to be a serial bomber at this point based on the similarities,’ Austin police Chief Brian Manley said on Monday.

Authorities haven’t identified the two men injured on Sunday, saying only that they are in their 20s.

William Grote told The Associated Press on Monday that his grandson was one of them and that he had what appeared to be nails embedded in his knees. Police described the men’s injuries as significant, and both remained hospitalized in stable conditions.

Grote said his grandson was cognizant but was still in a lot of pain. He said on the night of the bombing, one of the victims was riding a bike in the street and the other was on a sidewalk when they crossed a tripwire that he said knocked ‘them both off their feet.’

‘It was so dark they couldn’t tell and they tripped,’ he said. ‘They didn’t see it. It was a wire and it blew up.’ 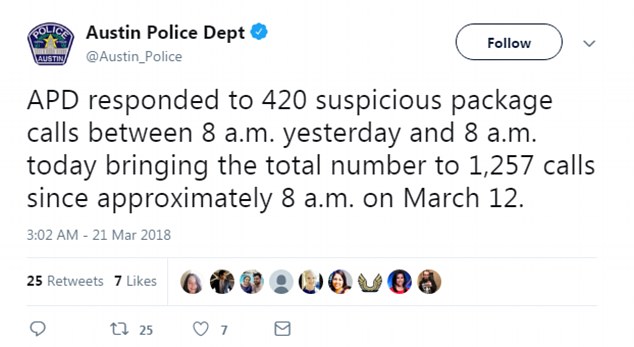 Austin Police have responded to more than 1,000 calls of suspicious packages since March 12 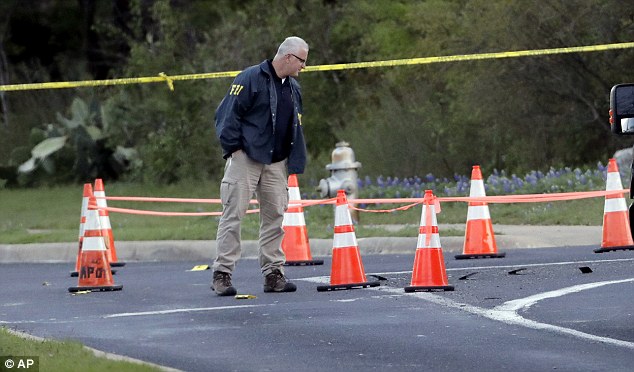 FBI investigators inspect the site of the fourth bombing in Austin on Monday morning. Police had warned residents to remain indoors as they looked for possible links to other bombings 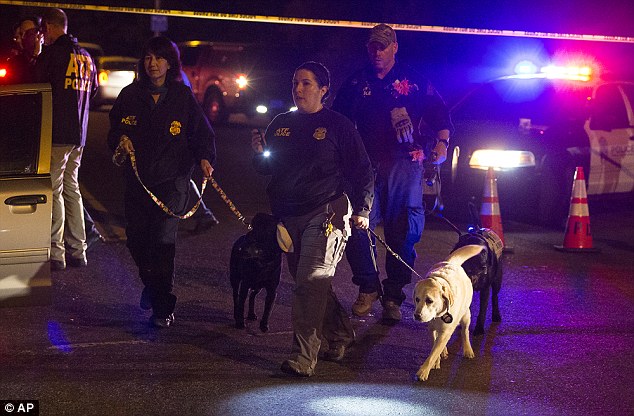 Residents in the Travis Country area were ordered to stay in their homes until late on Monday. Police kept residential streets on lockdown as they gradually expanded their barricades and closed off all roads into the neighborhood.

Authorities repeated prior warnings about not touching unexpected packages and also issued new ones to be wary of any stray object left in public, especially ones with protruding wires.

Local and state police and hundreds of federal agents are investigating, and the reward for information leading to an arrest has climbed to $115,000.

‘They’ve gone from targeting a specific individual to ‘I just want to kill someone’. That’s concerning,’ McNear said.

Fred Burton, a chief security officer for Stratfor – a private intelligence and security consulting firm based in Austin – said the individual or people behind the bombings are likely to be highly skilled and methodical.

‘This is a race against time to find him before he bombs again,’ Burton said. 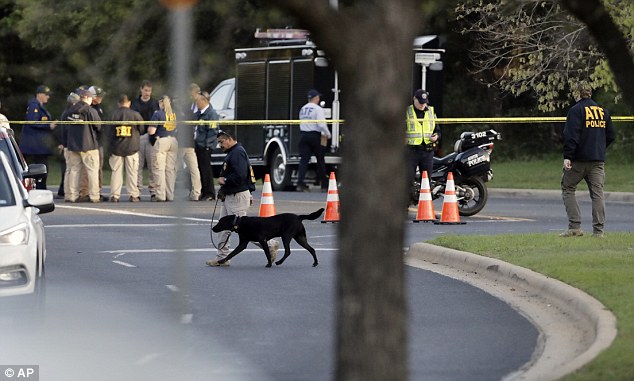 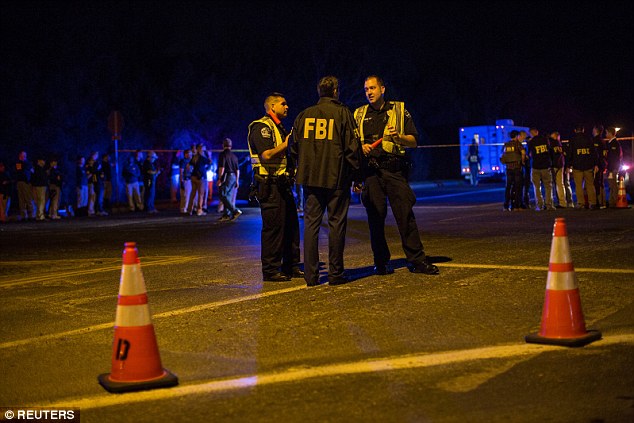 The first incident occurred on March 2 when a package bomb exploded at a northeast Austin home, killing a 39-year-old Anthony Stephan House.

Two more package bombs then exploded further south on March 12. Draylen Mason, 17, was killed and his mother was wounded after they opened a package in their kitchen.

The trip wire explosion on Sunday came just hours after police made an unusual direct appeal to whomever was responsible for three package bombs that killed two in the past month.

‘These events in Austin have garnered worldwide attention, and we assure you that we are listening,’ Manley said.

‘We want to understand what brought you to this point and we want to listen to you.’

The first incident occurred on March 2 when a package bomb exploded at a northeast Austin home (pictured above), killing a 39-year-old Anthony Stephan House 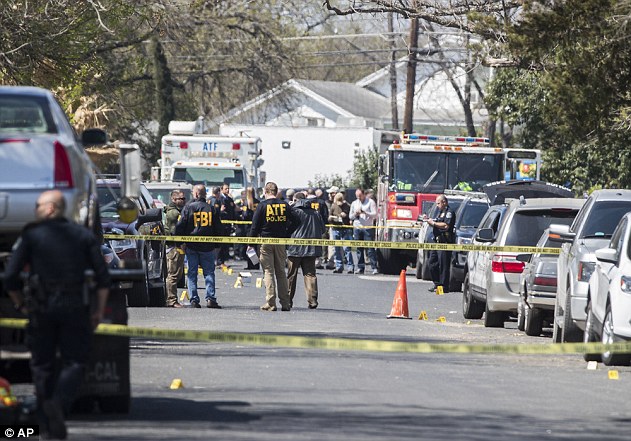 A 75-year-old Hispanic woman named by family as Esperanza Herrera was severely injured when a bomb exploded at her home on March 12. Pictured above is the police operation