Le Golf National is looking in tip-top condition ahead of the eagerly anticipated 42nd edition of the Ryder Cup.

After Tiger Woods capped off a remarkable comeback from injury by winning the Tour Championship on Sunday – his first win since 2013 at the WGC-Bridgestone Invitational – the excitement levels have been raised through the roof.

And as Team Europe prepare to go head-to-head with the United States, who haven’t won on European soil in 25 years, the greenkeepers have been hard at work to get the course looking in pristine condition for those in attendance. 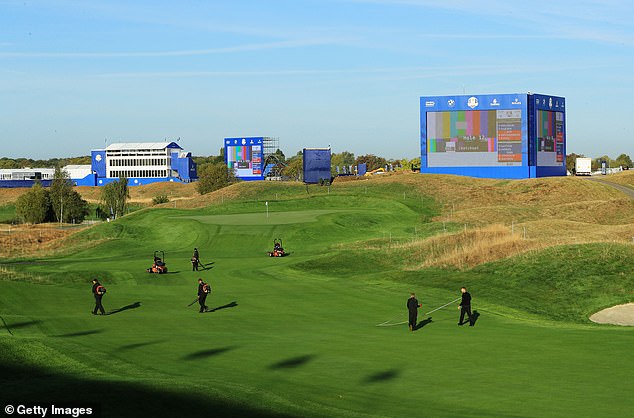 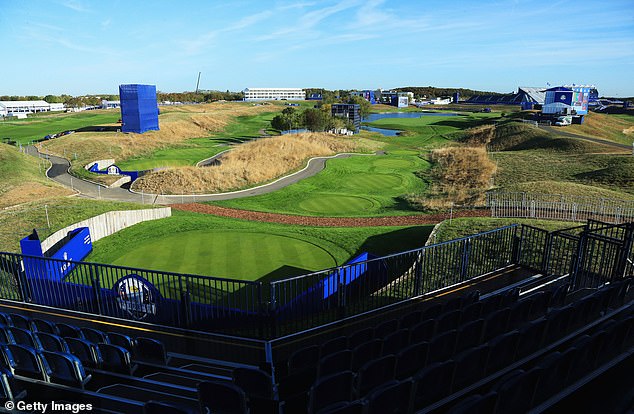 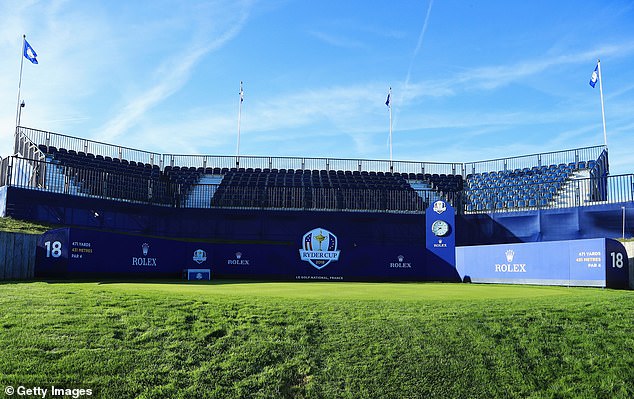 The Albatros Course at Le Golf National is located southwest of central Paris.

It was designed by Hubert Chesneau and Robert Von Hagge, in collaboration with Pierre Thevenin.

Just four days before one of the greatest sporting events kicks off, greenkeepers at the Paris course were pictured mowing the fairways at dawn as they look to make it an unforgettable venue – the first time France will host the Ryder Cup in its history.

There is a stunning blend of green and blue on the Albatros Course, with the stands painted in Team Europe’s colours to display their show of support for Thomas Bjorn’s men.

There will be a huge backing from both teams when the action gets underway on Friday, with the first tee grandstand for the Ryder Cup being the biggest yet, with a capacity of over 6,500 fans.

The massive grandstand features over 6,500 seats, as well as room for around 150 standing spectators… so no pressure for the Ryder Cup rookies! 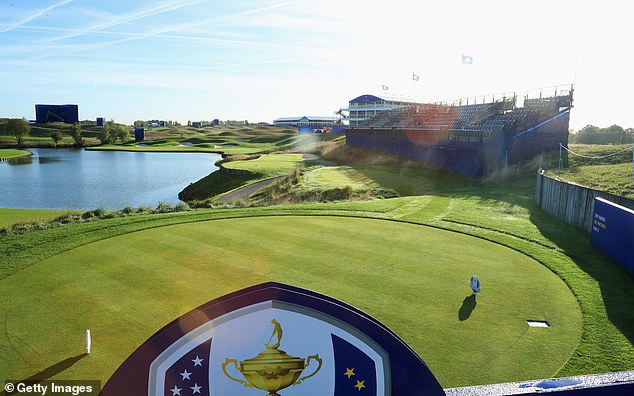 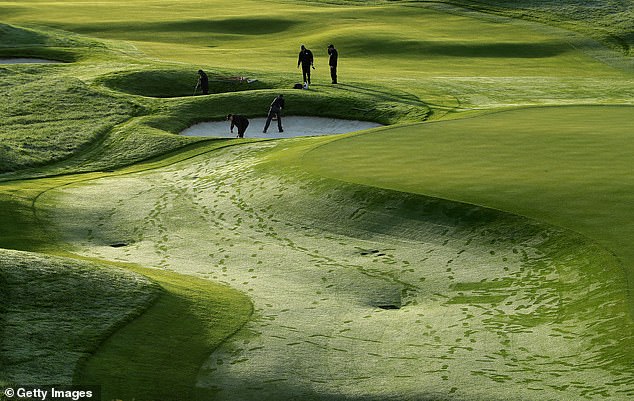 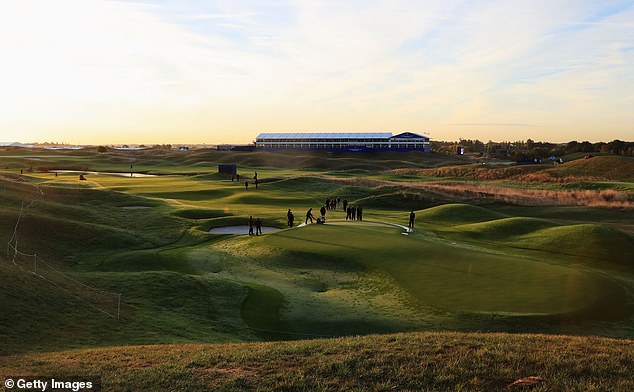 The first tee at Le Golf National will be over three times as big as the previous two – at Hazeltine, which had a capacity of 1,668 fans and Gleneagles, which held a maximum of 2,148.

Meanwhile, the Albatros Course is considered one of the best championship courses in Europe, receiving huge praise from professionals in the past.

A hosting venue of the French Open since 1991, the course combines the traditional feel of a links with the modern features of target golf.

The 24 stars on display at Le Golf National will be tested to the max, with the course’s slick greens, vast undulating fairways and links-style bunkers. 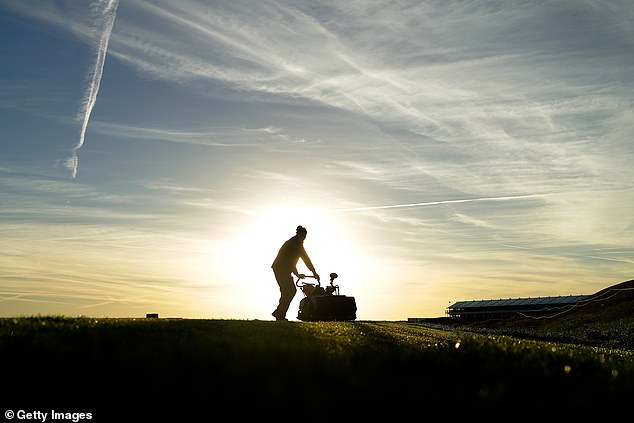 Greenkeepers were out at dawn, finishing off their preparations ahead of Friday’s start 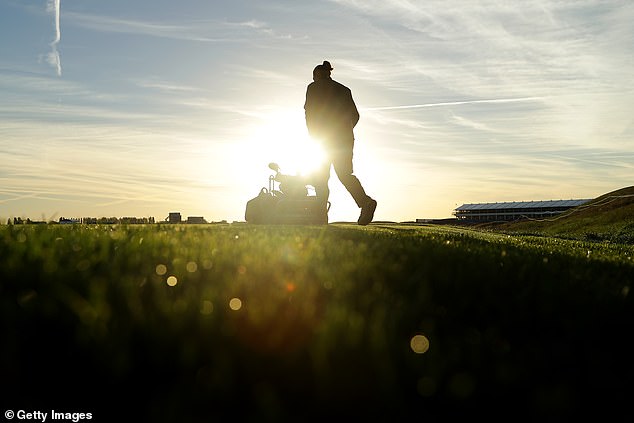 The 24 golfers will get first feel of the course on Tuesday, when they begin their practices

The final four holes should be enthralling viewing for those lucky enough to attend, with water hazards surrounding the closing stages of the course.

Both teams will get their first opportunity to practice on the hallowed turf on Tuesday, before some of the most famous names from sport and the entertainment field take part in the Ryder Cup celebrity match.

On Wednesday, the Europeans and Americans will ramp up their practice on the course before they put the final touches to their preparations on Thursday before the highly anticipated opening ceremony and pairings for Friday are announced.

The stunning 18-hole course – situated in Guyancourt, southwest of central Paris – was designed by architects Hubert Chesneau and Robert Von Hagge, in collaboration with Pierre Thevenin. 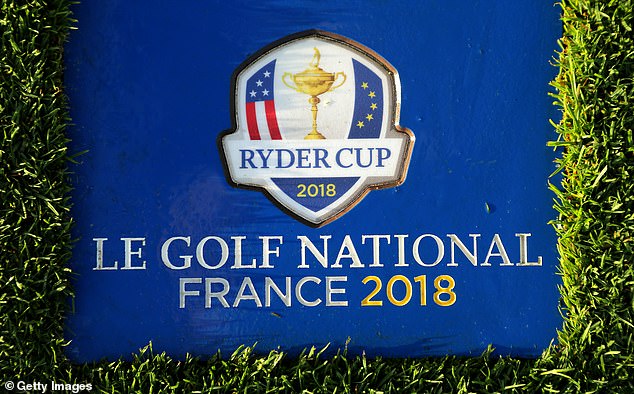