Kneeling on a scenic beach with a pile of discarded plastic, Jason Alexander wages a ‘never-ending’ war against this modern scourge.

The isolated shore at Bawdsey, Suffolk, has a Martello tower and Second World War pillboxes, but they are no defence against the relentless tide of rubbish washing in.

So Mr Alexander visits every week to patrol a two-mile stretch and collect all the litter he can. Each time, he fills three bin bags with discarded plastic such as bottles, containers and packaging.

Many of the items he finds are recent, but some have been in the sea for years, highlighting the long-term effect plastic has on the environment. Last week, for example, he found a Fairy Liquid bottle he believes dates from the mid-1970s to early 1980s.

‘The beach is beautiful in bright sunshine,’ said Mr Alexander, 47, of Rushmere St Andrew, near Ipswich. ‘But if you look closer, you see plastic dotted around everywhere. It is a horrible eyesore and damaging to the environment.

‘I pick up as much as I can but I run out of bags or arms to carry the rubbish, so stuff gets left. 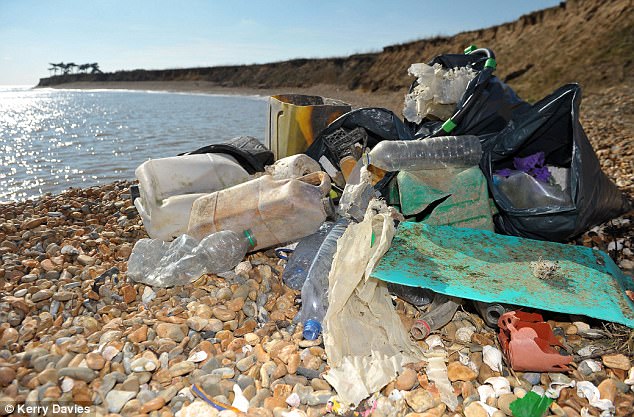 ‘It can be disheartening because you return a few days later and there is a new load of plastic everywhere. It is a never-ending job.’

But he added: ‘You have to make the effort. If I was not doing this, I dread to think what the beach would look like.’

The Daily Mail has spent a decade campaigning against the plague of plastic. Victories include charges for shopping bags, a crackdown on microbeads and a government pledge to start a plastic bottle deposit return scheme. 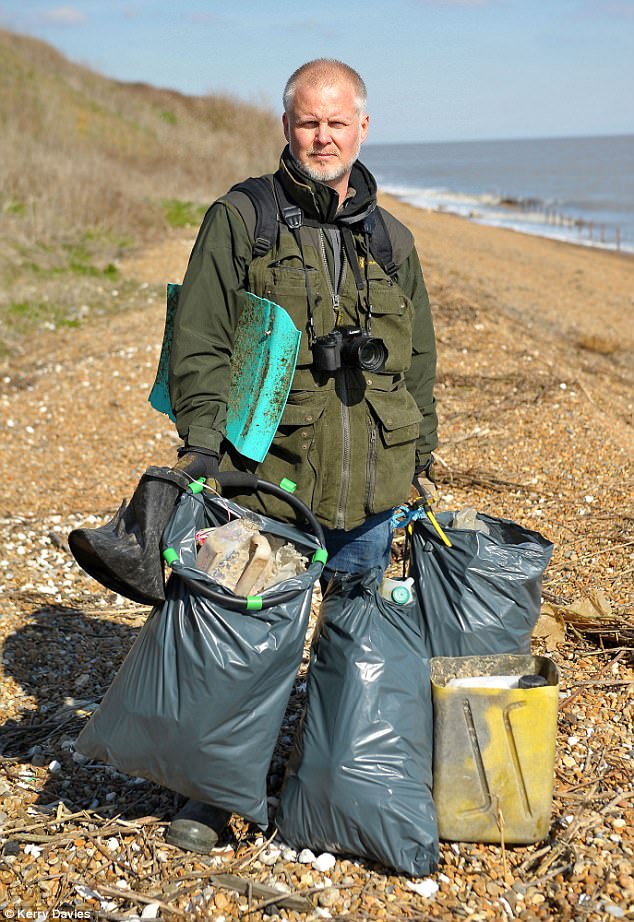 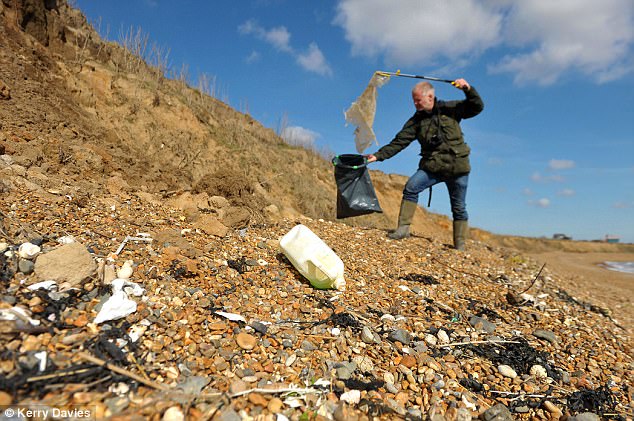 But concern is still growing about the impact on wildlife and humans. This month we revealed how scientists now fear we are inhaling tiny particles present in the air.

And the amount of plastic in the oceans is expected to triple within ten years. The rubbish breaks down into smaller pieces of micro-plastic that are eaten by birds and fish, thereby making their way into the food chain.

Mr Alexander, an electronics engineer and product designer, began his one-man crusade in 2014. He collected rubbish from a number of sites in Suffolk but kept returning to Bawdsey because of its spectacular beauty.

The haul of plastic on each trip typically weighs 22-26lb, according to portable scales he uses. He takes it home and puts it in his blue wheelie bin for recycling.

But he added: ‘I can only pick up what I can see. I am worried about the micro-plastic you cannot see. There needs to be a change in the way people think so less plastic is consumed and thrown away.’