Around one million U.S. Marines and family of service members were poisoned by contaminated water while stationed at the Camp LeJeune military base – and now they are seeking justice.

Water at the Marine Corps camp in Jacksonville, North Carolina,  was found to have been contaminated with benzene, trichloroethylene and perchloroethylene among others in the 1980s.

In the time since, residents of the base have experienced severe negative side-effects, like cancer, renal toxicity, Parkinson’s. myeloma and more.

Legally, service members are not allowed to sue the U.S. Military – but a bill currently making its way through congress may open the door to allow them to receive compensation.

Around one million former veterans and their family members have suffered severe  negative health defects after being exposed to contaminated water while they were stationed at Camp Lejeune in Jacksonville, North Carolina (file photo)

The Camp Lejeune Justice Act of 2021, filed last year by Rep Matt Cartwright, a Pennsylvania Democrat, that would allow residents of the base during the three decade time period to sue the government for damages.

The bill has many supporters, including John Berry, a former soldier in the U.S. Army and now head of Berry Law, a firm that represents veterans in cases against the Department of Veterans Affairs.

He told DailyMail.com that the problem was known in the 1970s, and that the military failed to act to protect servicemen.

‘Back in the 70s people knew there was a problem,’ he explained.

‘Marines and their families were not aware that they were in danger, and especially the Marines that were deploying overseas with the expectation that the government was taking care of their families.’

‘Instead, just the opposite was happening. Their families were being exposed to harmful chemicals due to water contamination, and they had no idea.’ 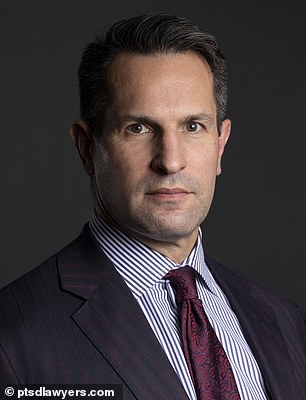 John Berry (pictured), head of Berry Law, is representing veterans and their families who were stationed at Camp Lejeune while the base had contaminated water

Many would later develop disastrous health defects and find out they were a result of government negligence.

But getting compensation has been near impossible. While injury suffered in active duty would be covered by disability benefits, earning compensation from a case like this would require a negligence lawsuit.

That is not possible, though. A 1950 Supreme Court case, Feres v United States set a precedent that military members were not allowed to file a suit against the government.

While the federal government is unlikely to wholesale give up their immunity to lawsuits, HR 2192,  The Camp Lejeune Justice Act, may give these specific victims some reprieve.

As momentum around this bill forms, Berry says that the mission to protect veterans and their loved ones goes far beyond just one camp in North Carolina.

‘There are other other times [this has happened], there are other hotspots that we’ve heard about that may or may not be addressed,’ he said.

‘There are other military bases, where there were similar chemicals, improperly disposed of, that may have contaminated the water.

‘I think this [bill] is going to raise awareness and hopefully prevent this from ever happening again.’

As a veteran himself, he says that making sure the government takes care of those that has served is a priority of his.

‘The expectation is that when you’re done [serving], the government’s gonna take care of you,’ he added.