One of Britain’s longest surviving transplant patients speaks out

Richard Worthington was just 20 when, with his health fading fast as an infection had doubled the size of his heart, he underwent a transplant.

Thirty five years on, he says the memory of waking up from the operation — and feeling suddenly so much better — will stay with him for ever.

‘When I came round I could breathe properly for the first time in three months,’ says Richard, now 55.

That memory is particularly remarkable because Richard is one of only two British patients to have survived for more than 35 years after having a single heart transplant surgery.

His continued good health has surpassed all expectations. Back in the Eighties, when he had the surgery, patients were expected to survive for no more than five to ten years post-transplant.

Richard Worthington was just 20 when, with his health fading fast as an infection had doubled the size of his heart, he underwent a transplant. He is pictured with his wife is Deborah and his boys George (right) and Connor

Richard’s continuing good health is testament to the life-changing potential of transplants.

Richard has gone on to lead a full, healthy life. He married a nurse, Deborah, in 1990 and, despite being warned that the immunosuppressant drugs he took might make it hard for him to start a family as they can reduce a man’s sperm count, the couple, who live in North London, have four children.

Richard also had a successful career as a manager in the bullion trade, and now works full-time as a supermarket assistant.

But when he fell ill in December 1983, his prospects looked bleak. 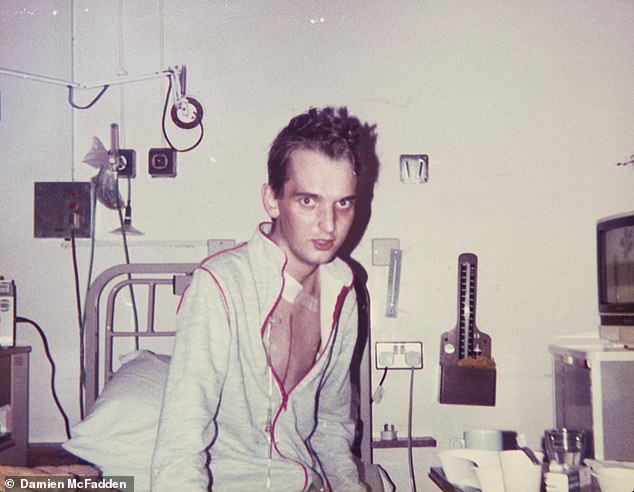 Back in the Eighties, when he had the surgery, patients were expected to survive for no more than five to ten years post-transplant

At the time he was a second-year business studies student at Leicester Polytechnic — now De Montfort University — and developed what was thought to be flu. Two months later, after doctors heard a tell-tale crackling sound on his lungs, it was found to be pleurisy, an inflammation of the tissue between the lungs and ribcage.

He was doubly unlucky, as within weeks he developed a separate problem — viral cardiomyopathy, where a virus causes inflammation of the heart muscle.

This makes it harder and harder for the heart to pump blood around the body and the effort causes the heart to swell like a balloon. It is a relatively common reason for people to need a heart transplant.

Richard’s heart doubled in size and although he was given diuretic drugs to help reduce the fluid in his body, his condition declined.

By April 1984 he was in severe heart failure, meaning his heart struggled to pump enough blood around his body, and doctors began to talk about a transplant.

‘By that time I was so ill I had no other option,’ he says.

Days from death, Richard was sent to Royal Papworth Hospital, in Cambridge, which at the time was one of only two hospitals where heart transplants were performed.

‘Before the operation I remember one doctor came in and said I looked ‘moribund’. In other words, I was about to die,’ he says. 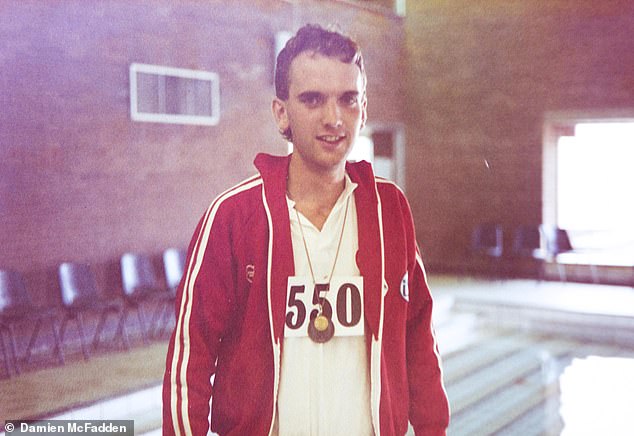 At the time he was a second-year business studies student at Leicester Polytechnic — now De Montfort University — and developed what was thought to be flu. Two months later, after doctors heard a tell-tale crackling sound on his lungs, it was found to be pleurisy, an inflammation of the tissue between the lungs and ribcage

‘I was struggling to breathe and going downhill fast. I thought I was in Papworth for an assessment, but next thing I knew I was being shaved for the operation.’

When he came round after the five-hour procedure, he already felt he had a new lease of life: ‘I was still weak but very positive about being given a second chance. That was my motivation to recover.’

His recovery wasn’t without setbacks. Within days his chest cavity was filling with post-operative blood — quite a common problem in transplant patients. Two weeks later he developed an ulcer in his intestines, brought on by the stress of the illness, which then perforated.

Two weeks after that, he contracted toxoplasmosis — a bacterial infection which travels to the brain — and was put on intravenous antibiotics.

When he eventually left hospital four months later and headed back to college, he found himself something of a celebrity.

His new-found fame allowed him to blag free drinks from pub landlords in exchange for a look at the 40cm scar that reaches from his chest to his navel. But he was careful not to drink too much.

‘I didn’t wake up each day worrying if there would be something wrong with the heart but I was much more careful about my health,’ he says. 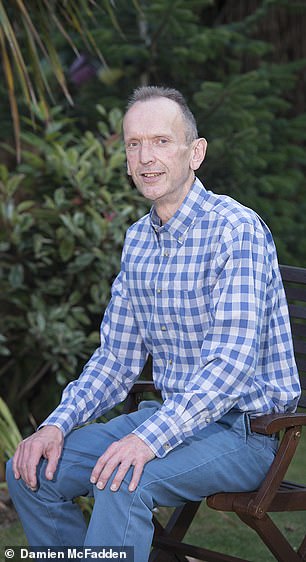 Richard remains proud he has lived a full life without, as he puts it, ‘being wrapped in cotton wool’

Heart transplant surgery has, in fact, changed little over the years, and at the time there was no other option for Richard.

‘The only thing to save him was a transplant,’ says Professor John Wallwork, the heart surgeon who did Richard’s operation, who is now chairman of the Royal Papworth Hospital NHS Foundation Trust.

‘Now there is so much that can make a difference to a patient, besides transplantation.

‘However, the operation now is largely the same as it was then.

‘It takes about five hours and requires two or three surgeons, two anaesthetists and two technicians operating the heart-lung bypass machines. But the basics of sewing in the new heart are much the same.’

The hoped-for outcome was, says Professor Wallwork, ‘the best quality of life for however long we could. We didn’t think beyond that. We expected them to have between five and ten years, but really it wasn’t about length of time but quality.’

Richard threw himself into fitness after his operation and took part in the Transplant Games, which began in 1978 as a way to encourage patients to regain fitness and strength.

Richard did the long jump, canoeing, swimming and throwing the cricket ball, and even went to the World Transplant Games in Kobe, Japan, in 2001.

He is sure he looked after himself better because of the transplant, though he has mostly tried not to dwell too much on his health.

‘I never thought about the heart until I was forced to, like when I went to Papworth for a check-up,’ he says. ‘At first it was every three months, then-six monthly, or sadly when someone who’d had a transplant died.

‘In those early years there was a family feel to the transplant unit at Papworth and going back to clinic you’d get to know people.

‘My new heart was a generous gift to me but it came from a young man who died in a road accident, so I’ve never wanted to celebrate it.’

Despite his fitness, Richard has suffered some issues because of taking anti-rejection drugs.

In 2000, Richard developed skin cancer on his elbow and head, which was successfully treated.

But in 2010 he had a transient ischemic attack (TIA) — or mini stroke — which occurs when there is a temporary lack of blood flow to the brain.

A scan showed a tiny hole in his heart, which may have encouraged a blood clot to form that temporarily blocked a blood vessel.

He was prescribed anti-coagulants, yet four years later he had a full stroke. His speech was badly affected but again he recovered after months of speech therapy and with help from his family.

A recent check-up found signs of heart disease — a narrowing of the coronary arteries.

Professor Wallwork says: ‘As people live longer with transplan-tation they can get diseases like ischemic heart disease — they are probably more prone than non- transplantees because of the effects of the anti-rejection drugs.’

Richard remains proud he has lived a full life without, as he puts it, ‘being wrapped in cotton wool’.

He couldn’t run a mile, he says, ‘but I do walk on average 20,000 steps a day without it affecting me. I never thought I’d live long enough to draw my pension — but the pension is in sight now.’

This week: What is sepsis?

DR GOOGLE SAID: Type this question into the search engine and up will pop dozens of NHS pages with accurate information. But some sites misleadingly suggest sepsis can be treated with vitamins and minerals.

THE EXPERT: ‘Sepsis arises when the body’s response to infection goes into overdrive and attacks tissues and organs,’ said Dr Ron Daniels, head of the UK Sepsis Trust. ‘The heart and kidneys become starved of blood and oxygen. If not treated quickly, it can rapidly lead to death.’

Sepsis is also known as blood poisoning or septicaemia. ‘It is the UK’s biggest killer after cancer and heart disease,’ says Dr Daniels.

‘Seek help urgently if you develop slurred speech or confusion, extreme shivering or muscle pain, passing no urine (in a day), severe breathlessness, as if you’re going to die, or mottled or discoloured skin. Don’t waste time with vitamins and minerals.’