The Dad’s Army plotters who tried to topple the Prime Minister last week had planned to install a Tory MP dubbed ‘batty Baker’ as Chief Whip if their plans had come off.

High Wycombe MP Steve Baker was one of the ringleaders of the putsch and had been in pole position to take the job of Commons enforcer had it paid off.

But after the public failure of the plan the knives have come out for him, especially as it was Mr Baker who said the rebels had the 48 letters needed to trigger a vote of no confidence in Theresa May – a figure that has yet to materialise.

A fellow member of the Brexiteer European Research Group (ERG), which is led by Jacob Rees-Mogg, said: ‘The idea of him ever becoming a feared Chief Whip now is laughable.’

Members of the group have also been spreading stories about Baker’s ‘batty’ beliefs after Mr Rees-Mogg admitted their plans had gone ‘a bit Dad’s Army’.

One ERG member told The Mail on Sunday that Baker had – with apparent seriousness – warned them not to hold conversations in the street because ‘our enemies are using CCTV cameras to read our lips’.

Another said Baker had admitted that he keeps his phone overnight in a microwave to prevent it from ‘being bugged’.

And it was claimed he once broke down in tears in a meeting with Theresa May when she was Home Secretary over security services’ eavesdropping powers. 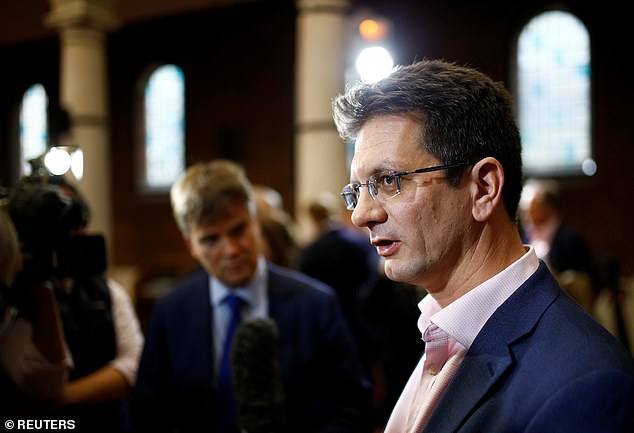 A born-again Christian, who was baptised by full body immersion in the sea, Baker keeps a silver coin in his breast pocket to remind him of the potential impending collapse of the banking system.

He also holds a major stake in an app that allows users to buy items with gold. Last night Mr Baker denied he kept his phone in a microwave and dismissed the claims as ‘childish nonsense’.

He said it was the sort of rumour ‘you would come to expect when you become successful’. But he added that he had always been a fan of ‘monetary activism’.

Mr Baker’s timing was also criticised because he tried to mobilise the coup while leading Brexiteer allies David Davis, Owen Paterson, Bernard Jenkin and David Jones were out of the country.