Archaeologists in Egypt have found proof that they are excavating a rare ancient sun temple, the third ever found and the first to be uncovered in 50 years.

These temples were built for pharaohs while they were still alive to grant rulers the status of god, in contrast to pyramids which ensured they were gods in the afterlife as well.

It is believed only six were built and so far only two have been found but now archaeologists digging beneath the remains of one of the known sun temples in Abu Gorab, north of Egyptian archaeology locality Abusir, have found proof of a third one.

The remains of the sun temple of Nyuserre were dug under, which is where archaeologists came across proof of a third temple

Digging beneath the remains of the sun temple built by Nyuserre Ini, a pharaoh who ruled for 24 to 35 years in the late 25th century BC during what is known as the Fifth Dynasty, revealed an older base.

It was made of mud bricks which suggested another building previously existed there.

Dr Massimiliano Nuzzolo, assistant professor of Egyptology at the Academy of Sciences in Warsaw, focused on told The Telegraph: ‘We knew that there was something below the stone temple of Nyuserre. 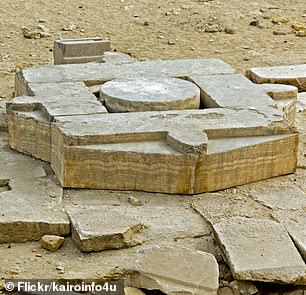 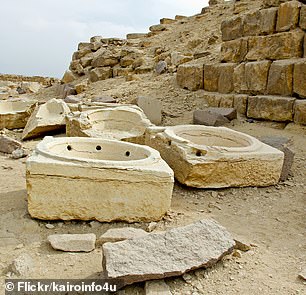 ‘The fact that there is such a huge entrance would point to a new building. So, why not another sun temple, one of the missing sun temples?’

When more debris was removed archaeologists saw a two-feet base of a white limestone pillar.

A collection of mud-filled beer jars was then uncovered in the foundations which researchers say is proof the site was a temple as this is seen to have been a ritual offering at the most sacred places. 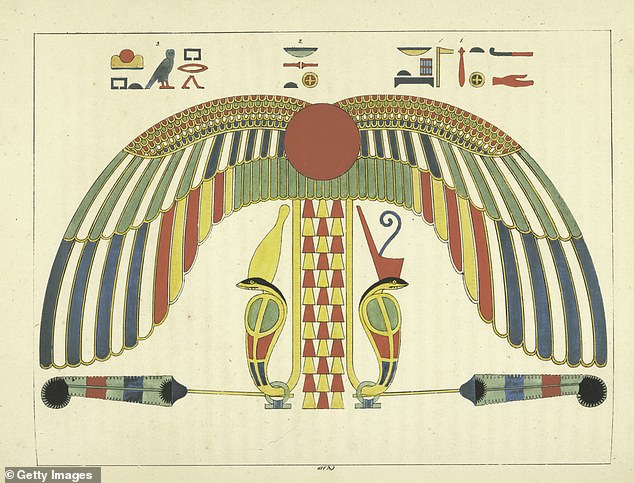 An ancient Egyptian emblem of the powerful sun god Ra, who the temples were built to by the pharaohs

WHAT DO WE KNOW ABOUT THE FIFTH DYNASTY OF EGYPT?

Pharaohs of the Fifth Dynasty ruled for around 150 years from the early 25th century BC to the middle of the 24th century BC.

The succession of the kings during this period isn’t certain as there is contradicting evidence about who ruled during certain periods but the dynasty is known for a number of achievements, including sun temples.

Every pharaoh in the Fifth Dynasty is thought to have built one with the exception of the last two rulers.

Pyramid Texts, thought to be the earliest known type of ancient Egyptian religious text, also came around towards the end of the dynasty under king Unas.

The number of high officials also increased during this period as the positions were no longer restricted to royal family members.

Academics believe when combined with newly discovered architecture, evidence points to the site being one of the rare sun temples.

Dr Nuzzolo added: ‘I have now many proofs that what we are excavating here is one of the lost sun temples.’

They were only built by a small number of pharaohs but the maker of the newly discovered site is likely to be a ruler from the Fifth Dynasty.

The temples were built to the powerful sun god Ra and each had a large courtyard with a pillar which aligned with the east-west axis of the sun.

Much like pyramids, they had one way in and one way out and were built on the west bank of the Nile river.