So Much Longing In So Little Space: The Art Of Edvard Munch

What is the writerly equivalent of a chatterbox? A chatterboox, perhaps. If so, the Norwegian author Karl Ove Knausgaard must surely be the chatterboox-in-chief.

And how! Within three years, from 2009 and 2011, he published six volumes of autobiography, My Struggle, achieving a total of 3,500 pages. Like many a chatterbox, he seems to have no editing facility: everything he does is bunged in, every cup of coffee poured, every cigarette smoked. He devotes page upon page to describing a bowl of cornflakes, almost down to a pen-portrait of each individual flake. Nothing is discarded. Readers who imagined that his final volume meant that the end was in sight were in for a shock: it turned out to be 1,150 pages long. If you ever happen to bump into Knausgaard in the street, be sure not to ask: ‘How are you?’

Knausgaard has turned his attention to the strikingly prolific artist, his fellow countryman Edvard Munch, best known for The Scream

Yet readers flock to him. In Norway, a country with a population of just five million, My Struggle has sold 450,000 copies. But his appeal seems universal. Zadie Smith confessed that she became so addicted to the series that she needed the next volume like crack.

In this, his latest book, Knausgaard has turned his attention to another strikingly prolific artist, his fellow countryman Edvard Munch. Best known for The Scream, Munch did little else in his life but paint. When he died in 1944, aged 80, he left behind 1,789 paintings. By contrast, Vermeer left a total of 36.

And, like Knausgaard, Munch was extraordinarily self-absorbed. He only liked seeing people one at a time, and then only those he had known for years. Those who were admitted to his presence realised that the standard procedure was to keep quiet, and to let Munch do all the talking. Might it be that the subject of The Scream, a man with his hands over his ears, unable to take any more, is in fact a portrait of Munch’s average sitter?

The two men – writer and artist – are also linked by a strong sense of self-pity. Back in 2012, the Tate Gallery staged a haunting exhibition of Munch’s paintings. One of the canvases was a portrait of the artist naked and bleeding on an operating table, surrounded by surgeons, a nurse bearing a bowl overflowing with his blood. All very terrible – but, in real life, Munch had in fact been treated for no more than a bad graze, and it certainly hadn’t required major surgery.

Munch made four versions of The Scream. One was stolen in Oslo in 1994. The thieves left a note: ‘Thanks for the poor security.’

So this short book about Munch is in many ways a meeting of minds. The first time Knausgaard saw Munch’s pictures he was in his late teens. Until that moment, he had little interest in art, but when he first set eyes on a Munch, in the National Museum in Oslo, everything changed. ‘While the preceding paintings had opened up to me and as it were received my gaze, with Munch’s paintings it was the other way round, it was as if they came towards me, that they were active while my gaze was passive. That kind of intensity, that a picture could take possession of a room and dominate it, was something I hadn’t experienced before. They were trembling!’

As you can see, this is a far cry from conventional art criticism, which tends towards the objective and impersonal. Knausgaard never quite says that the eyes of a portrait followed him around the room, but he gets pretty close to it. More often than not, it’s all about him.

‘Looking at the picture,’ he writes of a painting of a woman in white, leaning against a tree, ‘it is impossible not to become this figure and in that way be forced to confront her directly. It is me she is looking at, it is me she is leaning towards. And it is me she frightens? 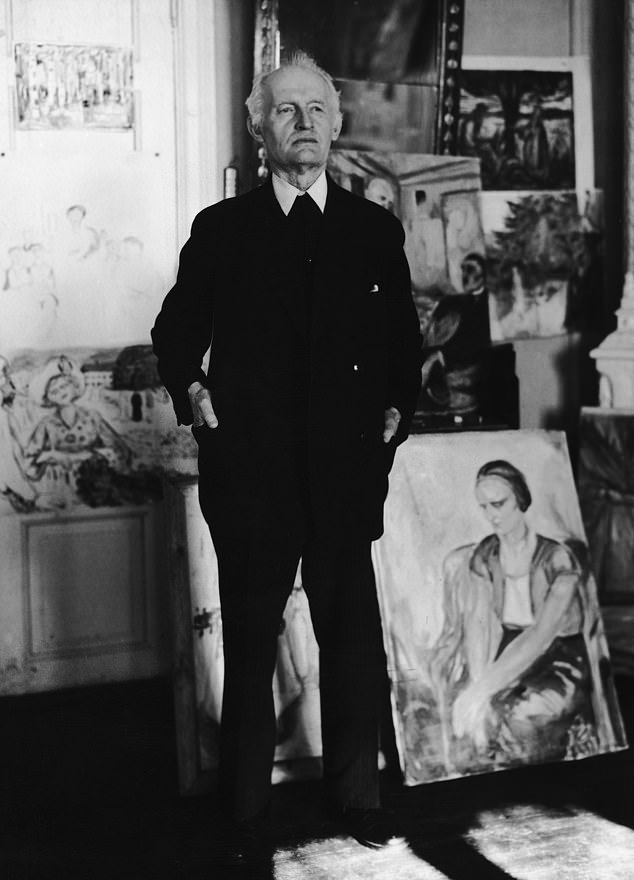 What is the writerly equivalent of a chatterbox? A chatterboox, perhaps. If so, the Norwegian author Karl Ove Knausgaard must surely be the chatterboox-in-chief

‘What is it about her that could possibly be frightening?

Scholarly types would probably argue that this type of art criticism is as uncalled-for as whistling The Birdy Song at a Requiem Mass. Personally, I find it by turns irritating and exciting, but, strangely enough, never boring.

There is no sense of Sunday Best about Knausgaard’s art writing: he has an exhilarating absence of tact. No self-censorship for him: if a thought occurs, he slams it down on paper, regardless of correct form.

Across seven or eight pages, he writes about having to deliver an important lecture on Munch, to mark the 150th anniversary of his birth. ‘Only a few hours remained until I had to set off, and I still hadn’t written anything I could use in my lecture.’ He then lists all the distractions that had stopped him focusing on the task in hand: the car had to be taken to the garage; a child was having a hard time at school; his mother-in-law had been staying and ‘new tensions filled the house’; and ‘the kind but stupid and for me unmanageable dog had a sore on its chest’.

He quickly scooted through four volumes of Munch’s collected paintings but ‘I still couldn’t come up with anything to say about them’. Eventually, he spent a couple of hours writing something, but ‘I wasn’t very pleased with it’. Then he set off. ‘I didn’t want to go, didn’t feel up to it, but I had to.’ He was met at a train station by a representative of the National Museum of Art. He reports that she ‘said she had Tourette’s syndrome’ but then wonders, ‘or was that just a thought that came to my mind?’

From the evidence, it seems likely that it is Knausgaard himself who suffers from Tourette’s syndrome: he is incapable of stifling inappropriate thoughts. This book is intended to tie in with an exhibition of Munch’s works he is curating, but much of it is given over to wondering whether, when all is said and done, Munch is really all that good.

Most people he speaks to seem to be agreed that Munch painted far too much, and it’s all very up-and-down. A painter called Vanessa Baird proudly declares that ‘many of his pictures aren’t very good, and it doesn’t matter. It allows one to appreciate one’s own excellence’. The elderly artist Anselm Kiefer estimates that 70 per cent of Munch’s output is ‘weak’. One of Munch’s biographers thinks that most of the stock held by the National Museum consists of ‘basement drudges’.

Having chosen the Munchs that he wants to put in the exhibition, Knausgaard finds himself seized by ‘a bottomless anxiety: had I selected all the poor paintings by Munch based on an underlying notion that they were good because Munch had painted them?’

And what of The Scream? Right at the beginning of the book, Knausgaard suggests that its familiarity might have robbed it of its power. ‘It is no longer possible to see it as if for the first time, and since so much of what Munch invested in this painting had to do precisely with alienation, with seeing the world as if for the first time by creating a distance of non-familiarity, it is clear that The Scream is in a sense ruined for us as a work of art.’

At moments like these, Knausgaard comes out with thoughts that others are too guarded, or too hidebound, to utter. This is what makes him such a compelling writer. And it is also why, for all its chatterboxing, for all its self-absorption, for all its great bundles of unnecessary information – he can never interview anyone without providing the details of his journey there and back – this book gets to places that conventional art history has long been too sheepish to explore.

In the end, Knausgaard bids for a Munch at auction, though, inevitably, not without voicing his doubts at some length. ‘I thought, damn it, I’ll place a bid. Then I thought, come on, Munch on the wall, what kind of people have that?’ He ends up buying it. Annoyingly, he doesn’t say what it cost him, but a version of The Scream recently sold for $120 million. It looks as though he’s going to have to maintain his prodigious output of words for some time to come.