One of the world’s rarest chameleons is facing EXTINCTION

One of the world’s rarest chameleons is facing extinction as its natural habitat is being converted to farmland, requiring ‘urgent’ conservation efforts, study finds.

Chapman’s pygmy chameleon had been feared extinct due to massive forest clearances in the Malawi Hills, but has been found ‘clinging to survival’ in patches of rainforest in Malawi by South African National Biodiversity Institute experts.

Also known as Rhampholeon chapmanorum, the creature grows to a length of just 5.5 centimetres (2.1 inches), and was first described by scientists in 1992.

Researchers say urgent conservation measures are required in order to save the ‘critically endangered’ species from extinction due to habitat destruction.

The study is based on the recently published findings of a survey conducted in 2016 by the South African National Biodiversity Institute and the Museums of Malawi.

The survey found small pockets of the reptile clinging on in surviving patches of forest in Malawi, with a total population down 80 per cent since the 1980s.

One of the world’s rarest chameleons is facing extinction as its natural habitat is being converted to farmland, requiring ‘urgent’ conservation efforts, study finds

The Chapman’s pygmy chameleon is just 2.1 inches long and found in the Malawi Hills.

They were first discovered in 1992 and their population has since dropped 80 per cent due to deforestation.

They were once thought extinct but a 2016 survey revealed tiny isolated pockets remain in the Malawi Hills.

It is one of the world’s rarest chameleons, if not the rarest.

The tiny species is listed as critically endangered on the IUCN Red List.

A genetic (DNA) analysis also suggests that the chameleons are trapped in their forest patches, unable to move between them to breed.

Conservationists say that without this interbreeding, genetic diversity will be lost over time posing another serious threat to the species’ survival.

The study was led by Professor Krystal Tolley from the South African National Biodiversity Institute and the University of the Witwatersrand.

It was her assessment work in 2014 which led the International Union for Conservation of Nature (IUCN) to list Chapman’s Pygmy Chameleon as ‘Critically Endangered’ on its Red List of Threatened Species.

Comparing satellite images of the Malawi Hills with those taken in the 1980s revealed ‘dramatic’ forest loss.

The area where the chameleon was first described in 1992 has since been completely cleared, with just small fragmented and isolated patches remaining.

Fearing the chameleon may have become extinct, Prof Tolley and her colleagues turned to crowdfunding website, RocketHub, to raise the cash needed to survey the remaining patches for any surviving populations.

Chameleon enthusiasts responded to the appeal, donating enough cash for the researchers to survey two of the remaining forest patches in the Malawi Hills.

They were also able to survey an area 60 miles away near Mikundi, where 37 of the chameleons had been released in 1998 to try to safeguard the species.

The chameleons were found in all three locations – and Prof Tolley described the team’s jubilation on discovering that the species was still present.

She said: ‘The first one we found was in the transition zone on the forest edge, where there are some trees but mostly maize and cassava plants.

‘When we found it we got goosebumps and just started jumping around. We didn’t know if we would get any more, but once we got into the forest there were plenty, although I don’t know how long that will last.’

Samples taken from the chameleons were then analysed to see if their genetic diversity had also been reduced. While this was not evident, the researchers believe that may be because such effects take time to show.

They did see evidence that the flow of genes between the fragmented populations had been disrupted due to their isolation and inability to interbreed.

Prof Tolley explained that, in effect, each forest patch is now home to a small, isolated population, unable to breed with chameleons in neighbouring patches. 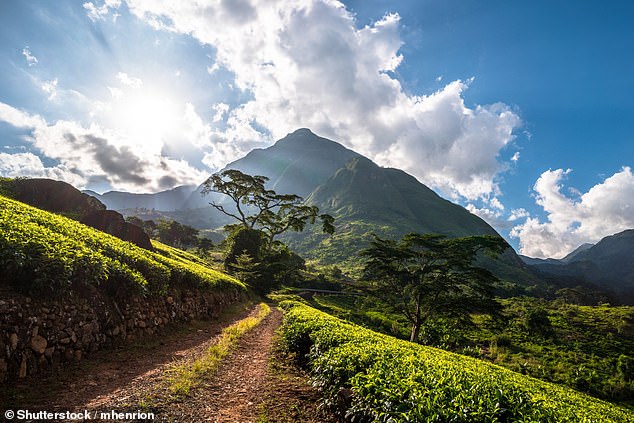 Chapman’s pygmy chameleon had been feared extinct due to massive forest clearances in the Malawi Hills, but has been found ‘clinging to survival’ in patches of rainforest in Malawi by South African National Biodiversity Institute experts

MALAWI: A LANDLOCKED COUNTRY IN AFRICA

The Republic of Malawi is a landlocked country in southeastern Africa bordered by Zambia, Tanznia and Mozambique.

The name Malawi comes from the Maravi, an old name for the Chewa people who inhabit the area the country covers.

The Great Rift Valley runs through the country and the nation has elephants, hippos, antelopes, big cats, monkey and rhinos.

It also has birds of prey, parrots, falcons and unique reptiles such as Chapman’s Pygmy Chameleon.

She said that will reduce genetic diversity over time and increases the extinction risk for the species as a whole.

She added: ‘The forest loss requires immediate attention before this species reaches a point from which it cannot return.

‘Urgent conservation action is needed, including halting of forest destruction and recovery of habitat to promote connectivity.’

The research team suggest including the remaining forest as part of the nearby Matandwe Forest Reserve so it can be designated as a Key Biodiversity Area, and introducing strong measures to ensure its protection.

They also recommend more and thorough surveys of the chameleons to monitor their population and genetic diversity.

The team also suggest the involvement of local landowners in protecting the Mikundi forest and its population as some insurance against the loss of the chameleon’s natural range in the Malawi Hills.

Overall, they say a ‘comprehensive and properly funded action plan’ needs to be drawn up and enacted to stop the species disappearing forever.

Prof Tolley said: ‘They are little, gentle creatures. Other chameleon species can be hysterical, hissing and biting, but pygmy chameleons are gentle and just beautiful. 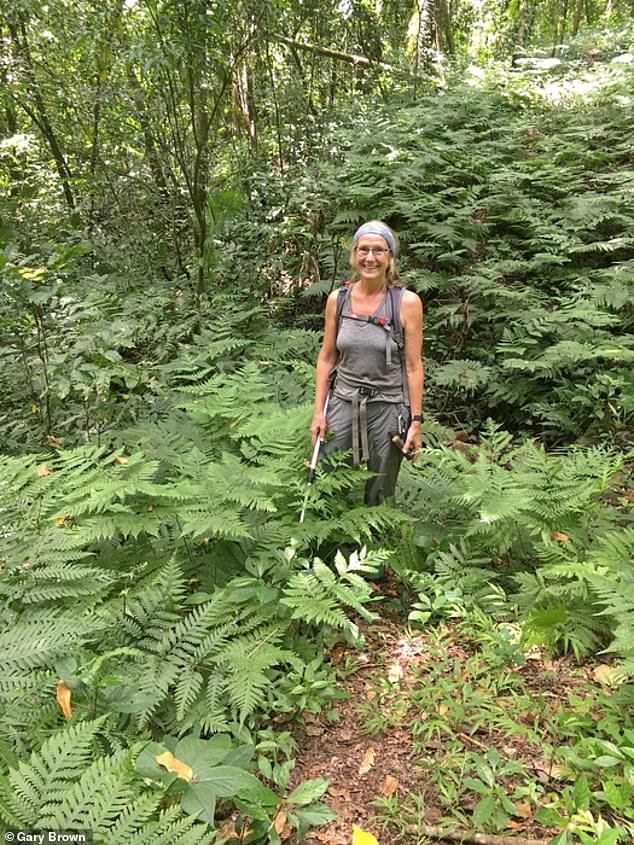 ‘Chapman’s in particular are one of the smallest and don’t have a prehensile tail like most chameleons, perhaps because they aren’t particularly arboreal but walk about on the forest floor in the leaf litter, crawling up into low bushes at night to sleep.

‘They blend right into the leaf litter and perfectly pattern match the dead leaves.

‘They are mostly brown but they can change to quite beautiful blues and greens with little dots all over them and that’s probably a way of communicating with each other.

‘They also vibrate and we could feel it when we held them. We don’t really know why but it’s also probably some form of communication. The fact they do it while held in our hands could mean it’s a way to try and scare predators.’

She added: ‘I get sad when I think what’s happening to them – what we are doing to their habitat. They are really just helpless victims.’

The findings have been published in the journal Oryx.