‘One owner from new’: 1979 Ford Escort Mk2 with a single keeper is being auctioned

The words ‘one owner from new’ are often music to the ears of second-hand car buyers looking for a reliable model that’s been well cared for and has a verifiable history.

However, this particular sale of a one-keeper Ford family car is more surprising than your conventional motor advert. That’s because the model in question is a 1979 Escort Mk2, which the driver bought new over 40 years ago and has kept ever since.

The car, which has a tad over 58,000 miles on the clock, is currently being sold in a specialist online auction. And the guide price of £12,000 to £15,000 means it will could sell for around the same price as a new Ford Fiesta.

One owner from new: This 1979 Ford Escort is being sold on for the first time in its existence after the original owner – who bought it in November 1980 – has retained it for its entire life so far

The Escort is one of the final Mk2 versions to come off the Saarlouis assembly line in Germany in 1979 before the arrival of the Mk3 version, which – to the upset of many drivers in the day – switched from rear- to front-wheel drive.

This example, in the highest ‘Ghia’ trim level with a manual gearbox, was first registered in November 1980, with the car likely being pushed to the back of the showroom to make way for the arrival of the latest Escort model – which likely meant it was bought with new with a significant discount.

The site selling the vehicle at auction – Car & Classic – even reveals that this was the owner’s first ever new car.

‘What followed was years of dedication, care and attention lavished upon this example of the once-ubiquitous Escort,’ the listed reveals.

The descriptions reads like a dream for any collector of classic and retro vehicles. 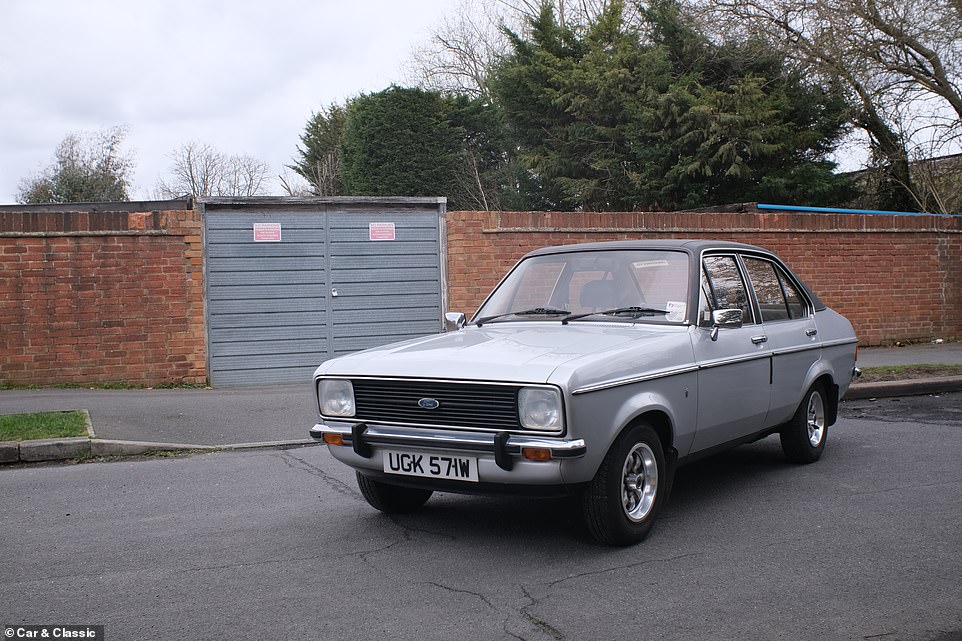 The Escort Mk2 is being sold in an online auction by specialist website Car & Classic. The vehicle is being offered to the highest bidder by the single owner’s family after the keeper recently passed away 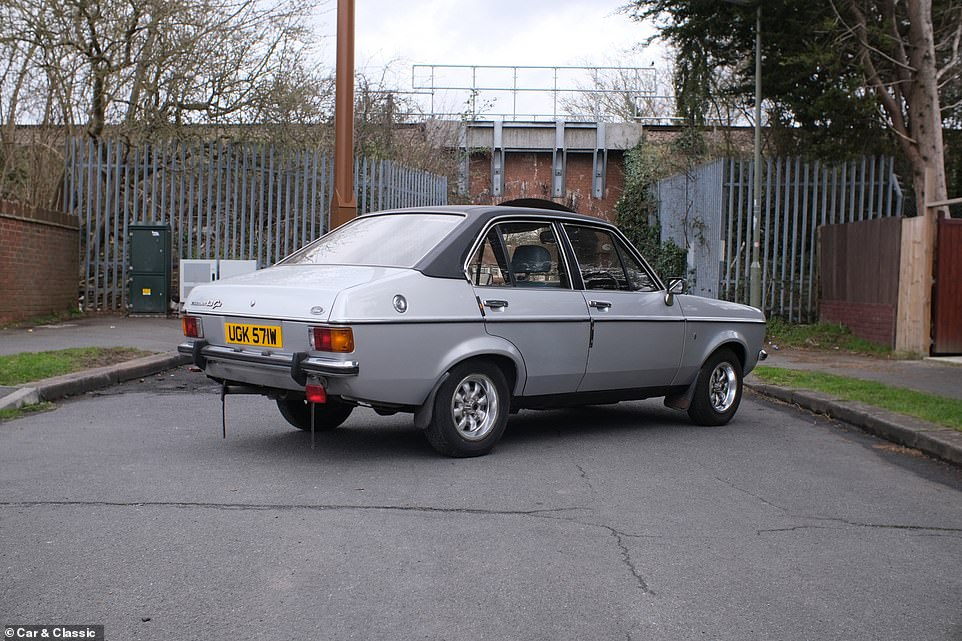 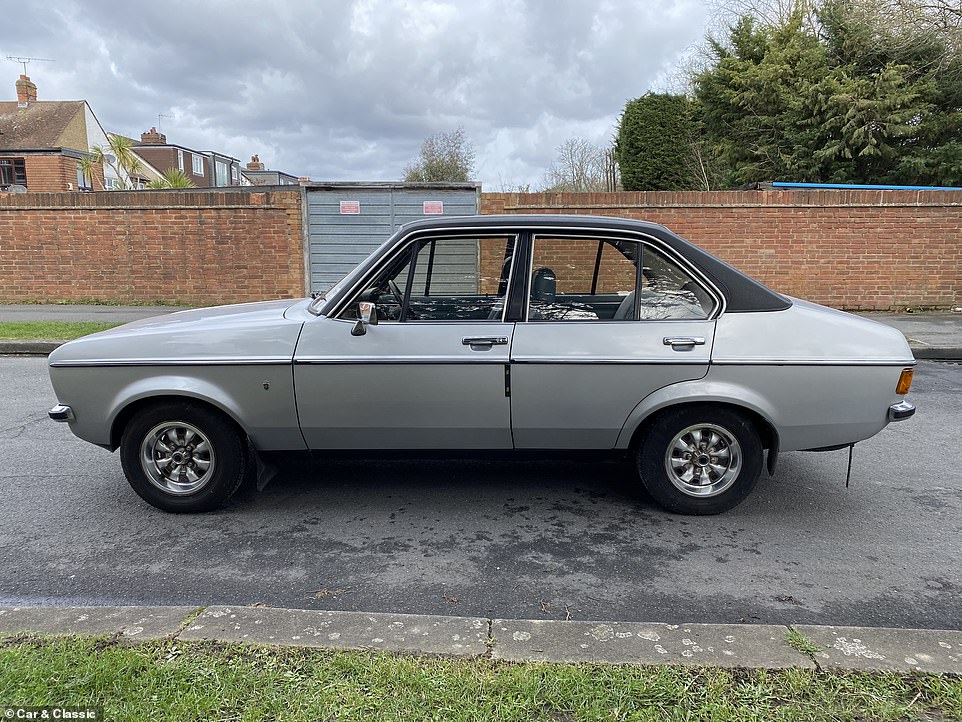 The original buyer would have negotiated a good deal on the car in 1980, with the Mk2 model likely sat alongside the sparkly new Ford Escort Mk3 with the dealer wanting to clear stock of the older version

It claims to have been garages for the entirety of its life and rarely used in bad weather, enjoying a ‘charmed life’ under the single ownership.

Unfortunately, the owner has recently passed away, with his family now making the car – which he fondly named ‘Bessie’ to the highest bidder.

The model is a 1.3-litre four-door saloon with a mere 58,366 miles on the clock. That works out at around 1,460 miles for each year it has been registered in the UK. 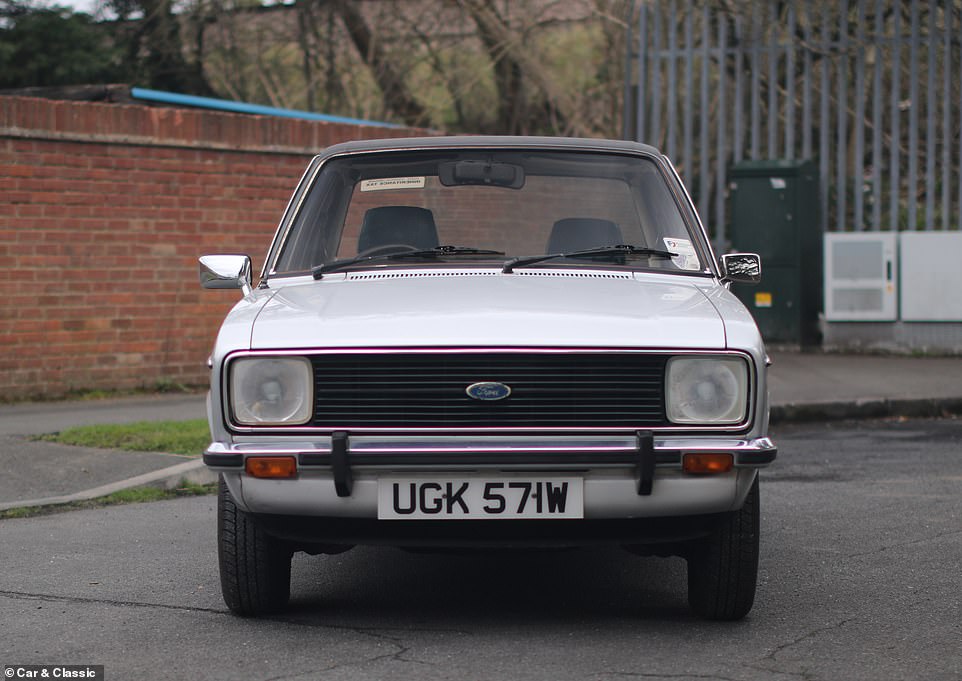 This particular car is the highest Ghia specification, which came with a few extras other models didn’t have, including a blue velour interior 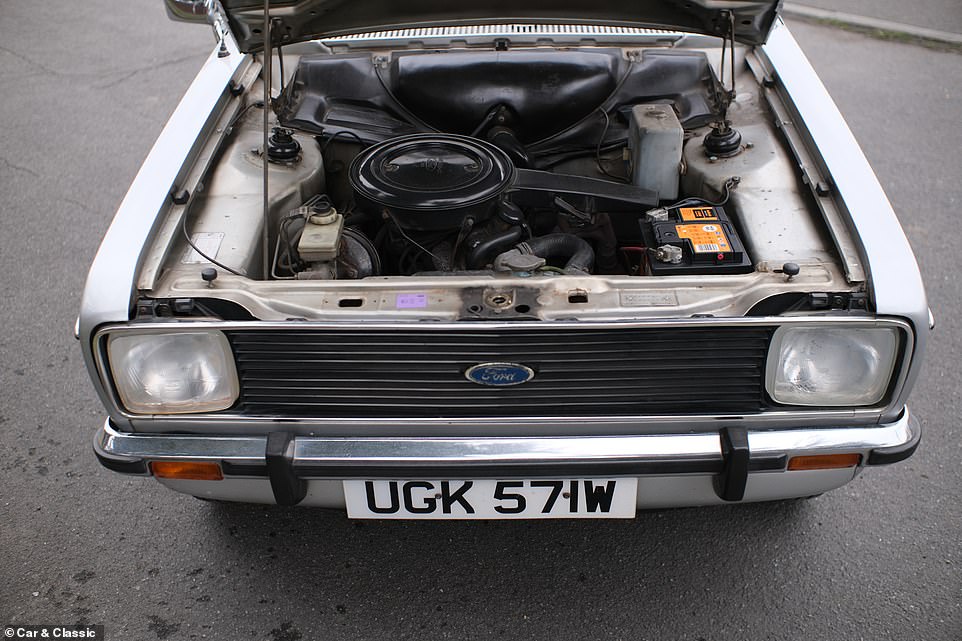 Under the bonnet is a 1.3-litre petrol engine that starts first time and runs without any clunks or alarming thumps 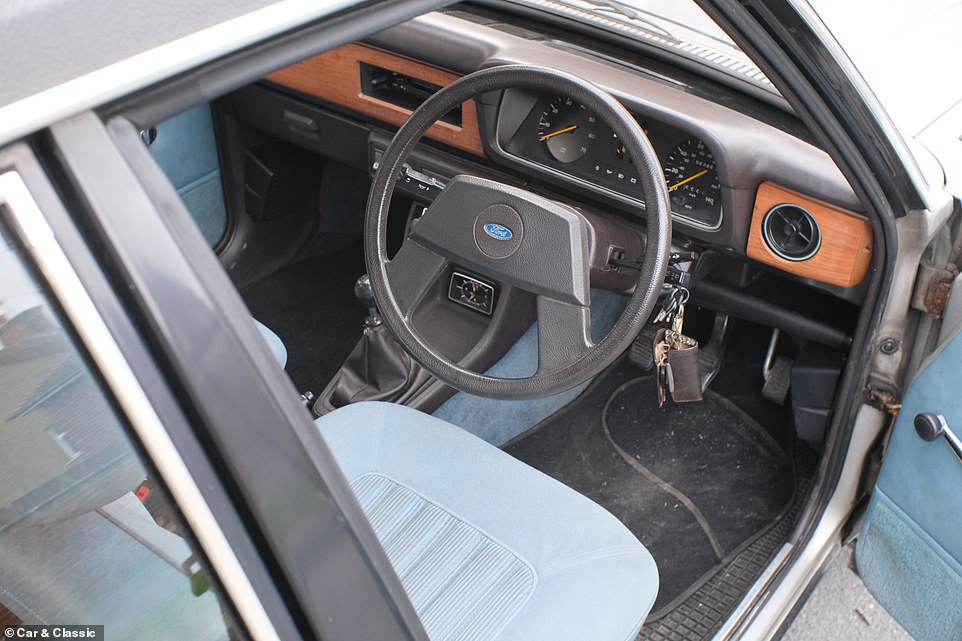 Even the key is the original one sold with the car, with the owner meticulously caring for his Escort for 40 years

In fact, the description says it has covered less than 20,000 miles in the last two decades, though kept in incredibly good condition despite having fewer outings than most cars.

Registration ‘UGK 571W’ retains its original metallic Stratos Silver paint and the blue velour interior, which was unique to the Ghia specification.

It also came with a centre console and clock, which were not available in lower-grader versions of the popular family saloon at the time. 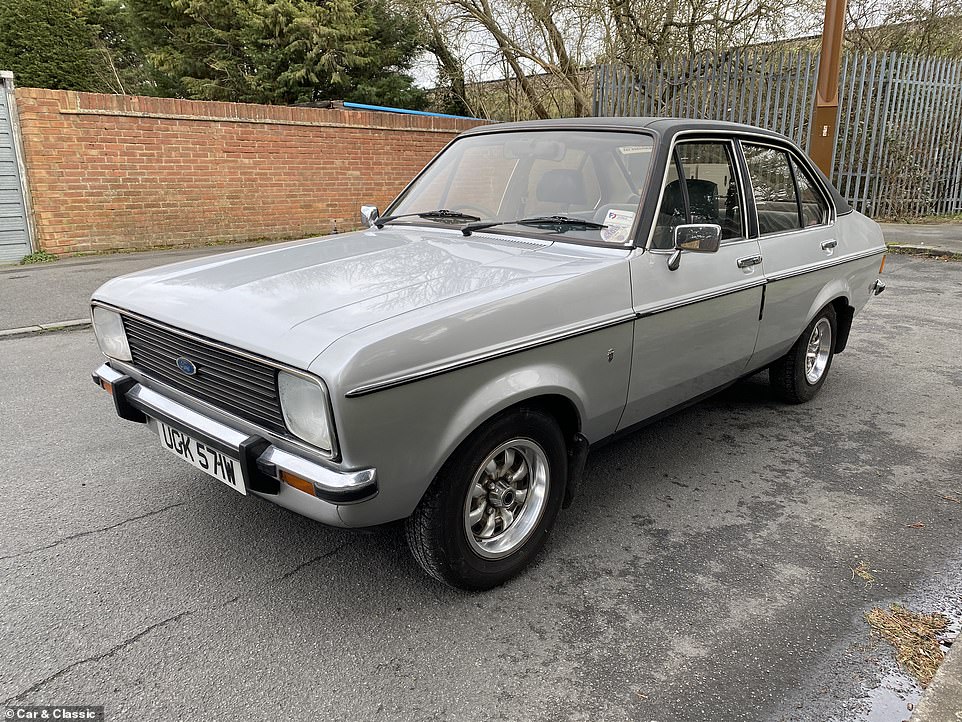 Registration ‘UGK 571W’ retains its original metallic Stratos Silver paint, which is said to be in good condition for its age 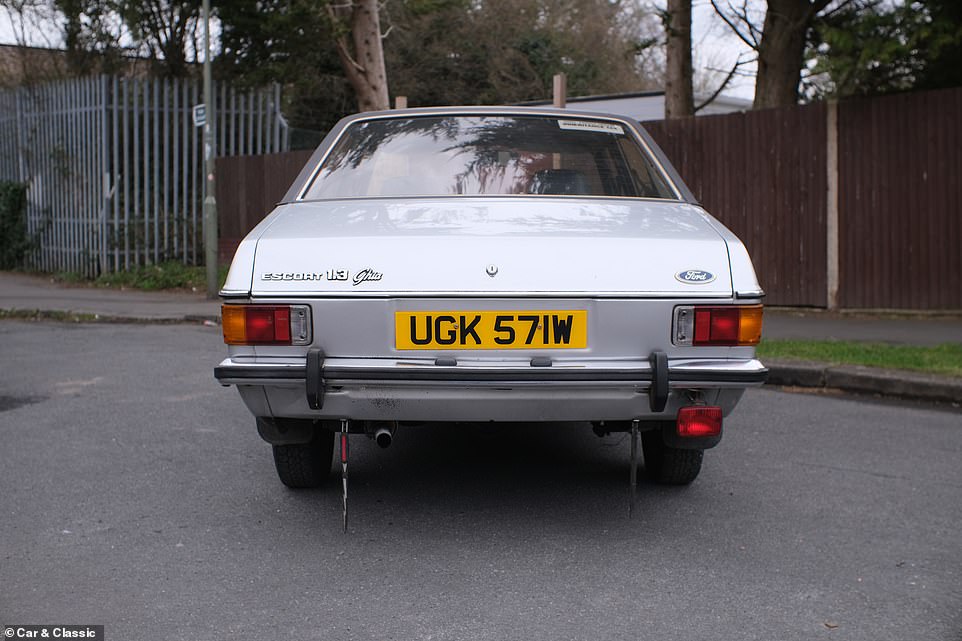 Like the Mk1 Escort, the Mk2 version was rear-wheel drive – which is why it was phenomenally good on the rally scene. When the Mk3 model arrived in 1980, Ford made the bold decision to switch to front-wheel drive 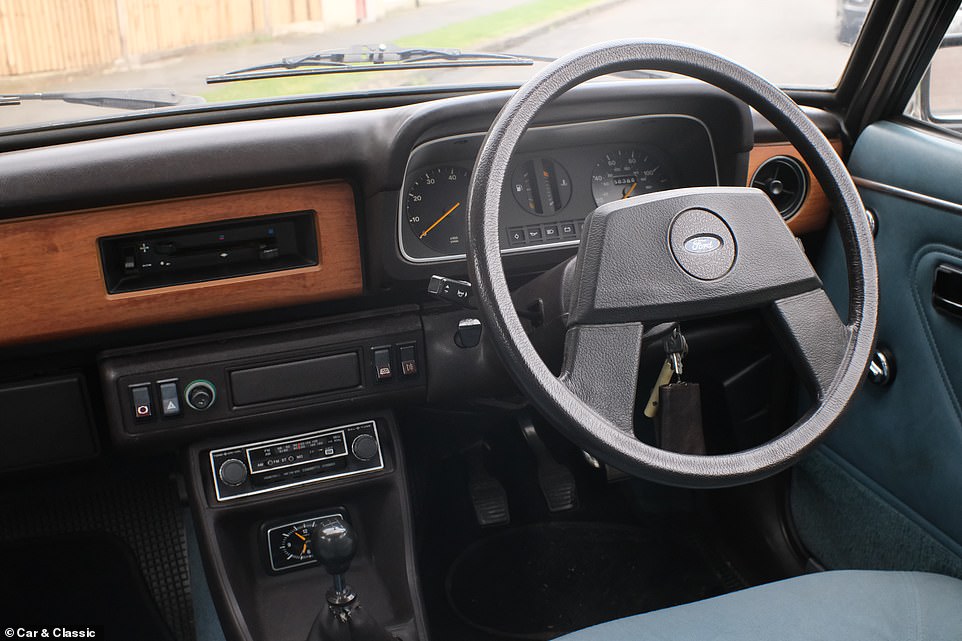 The interior is completely original, with the steering wheel and other major controls all said to be in great condition

Other extra features that made it stand apart include side mouldings, additional chrome trim and a vinyl roof.

Included in the sale is the original invoices and documentation from the Allen Taylor Ford dealership in South West London where the motor was purchased.

The owner even retained most of the tax discs the car displayed from 1980 until the paper disc was abolished in October 2014 and the sale is inclusive of a handful of period photos and the original handbook. 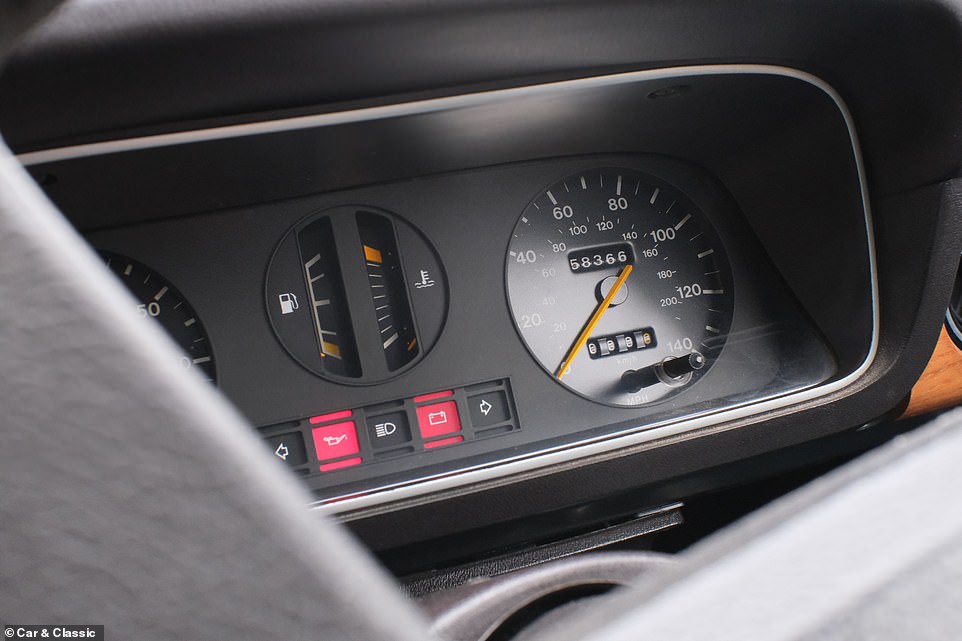 The car has a mere 58,366 miles on the clock. That works out at around 1,460 miles for each year it has been registered 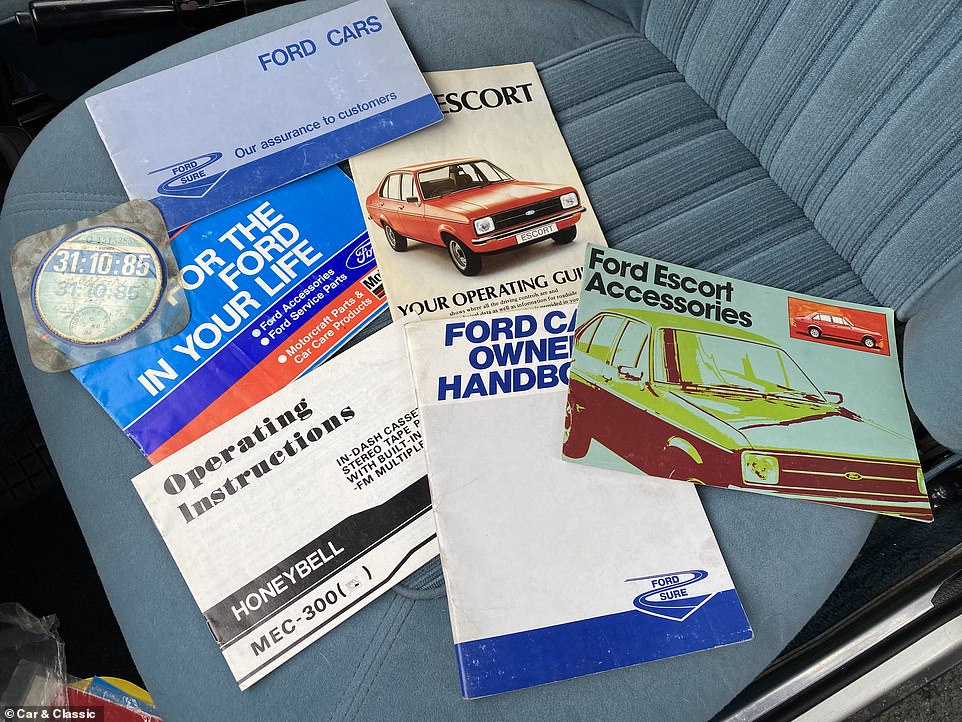 The single owner of the Escort has kept almost everything that came with the car, including all the owner’s manuals and instruction booklets 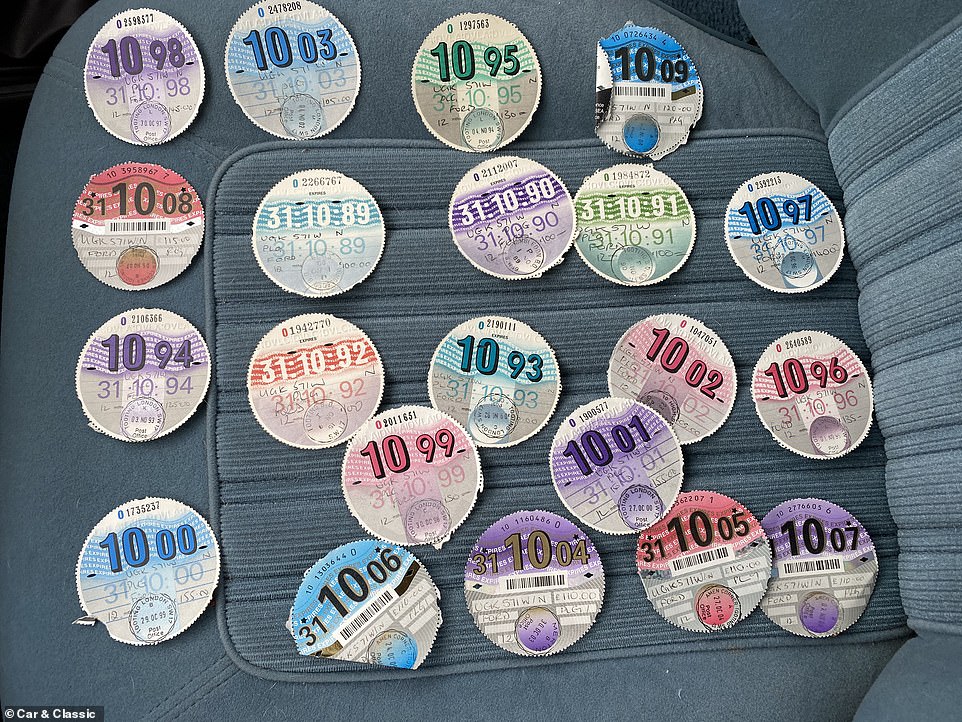 The owner even retained most of the tax discs the car displayed up until the paper disc was abolished in 2014. These were all found in the glovebox 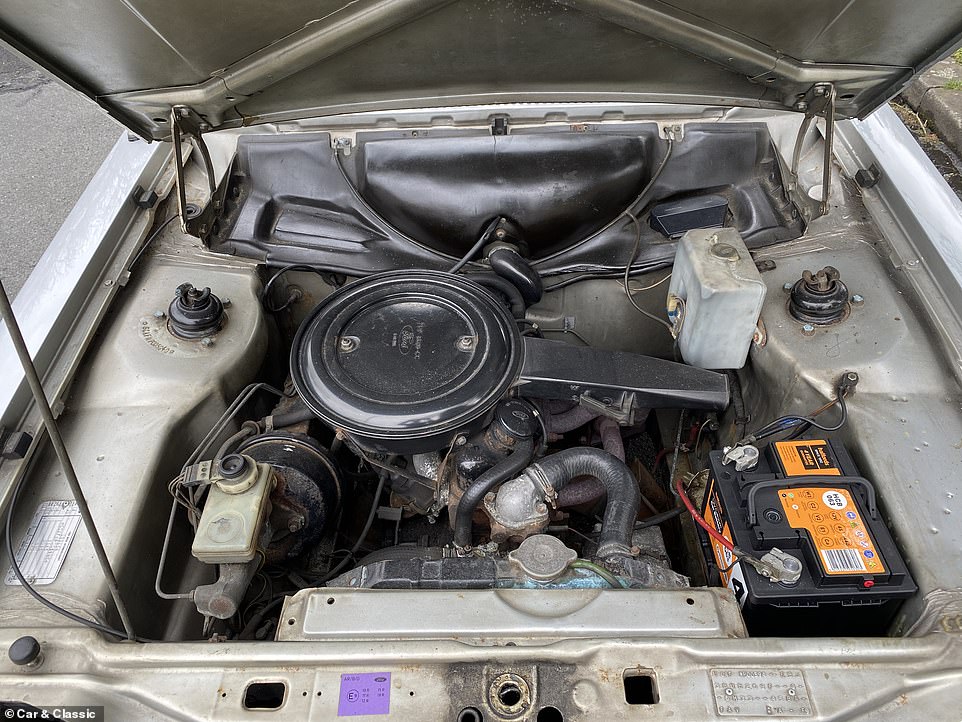 ‘With one owner, complete history and no questions, this is a very rare opportunity to own a truly original, unmolested Mk2 Escort,’ explains Chris Pollitt, from Car & Classic – the website managing the auction sale of the motor

The key first issued with the car is also still in use with the vehicle, with the 1.3-litre petrol engine starting on the first attempt, running smoothly with ‘no unwanted knocking noises’ – though it would ‘benefit from a tune-up and service’, says the listing.

Structurally, it’s in good shape too. Even the paint isn’t bad, though there are signs of corrosion, especially around the wheel arches and wheels themselves. 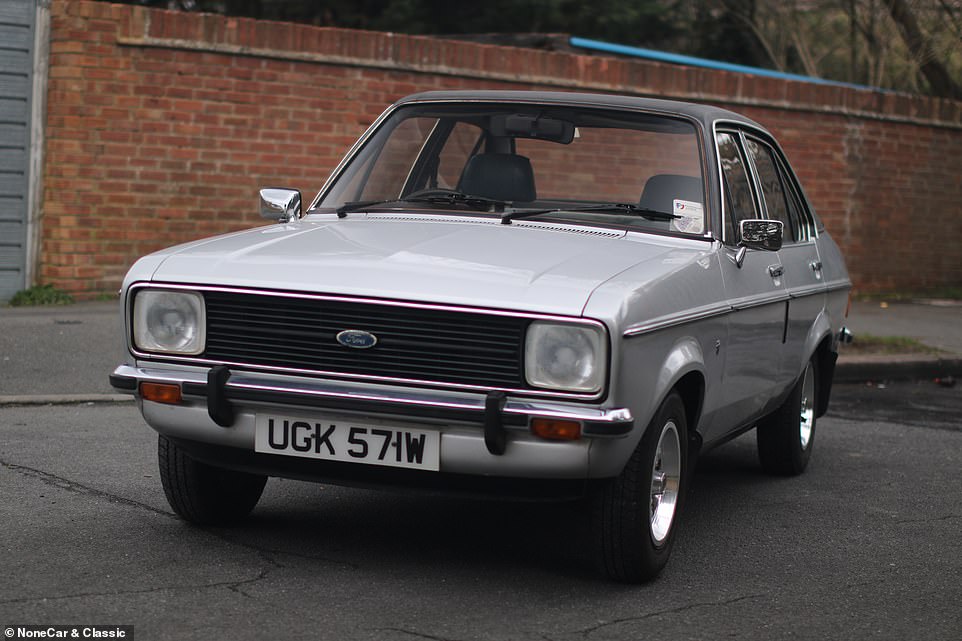 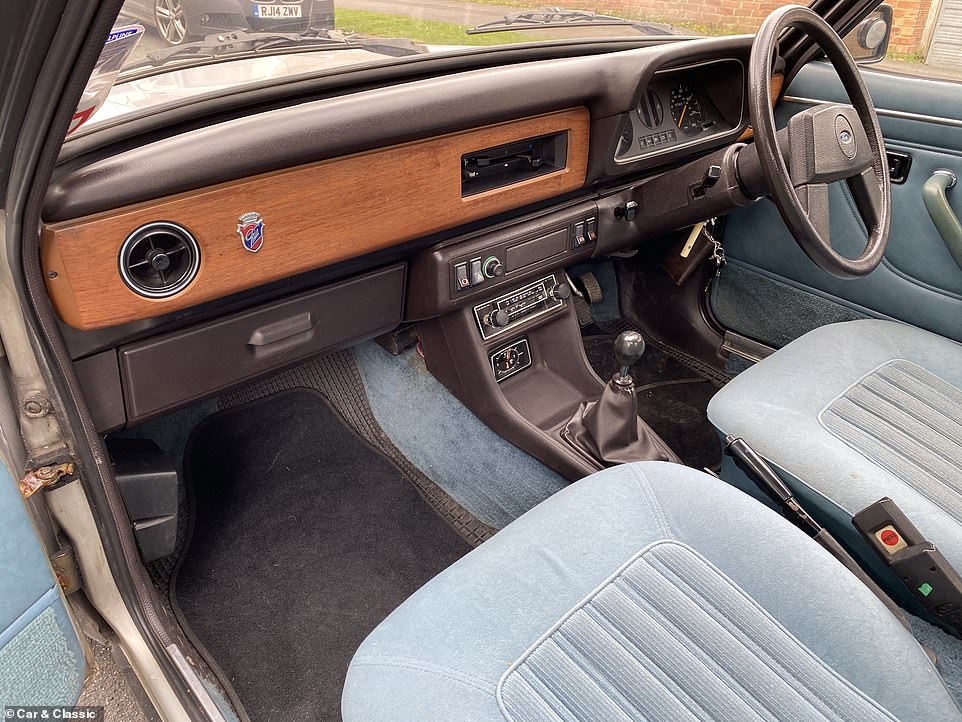 At the time of publishing, the highest bid on the car is £8,500, which is failing to meet the sale reserve. The auction ends tomorrow (Thursday 8 April) at 20:00 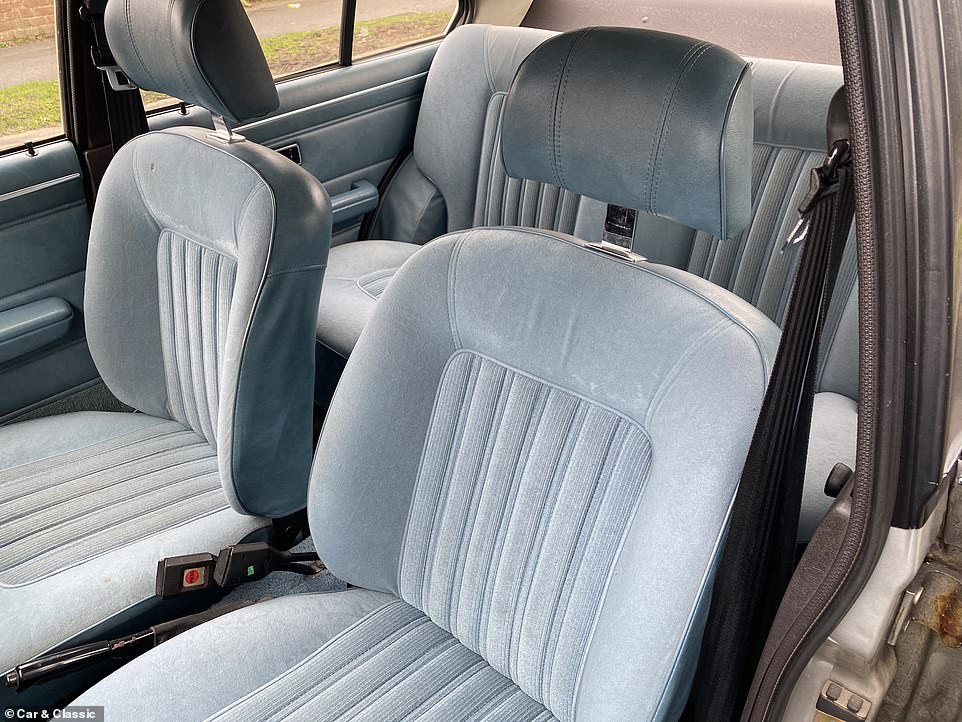 The blue velour interior is unique to the Ghia specification of the Escort Mk2. It also featured other extras including a centre console and a clock 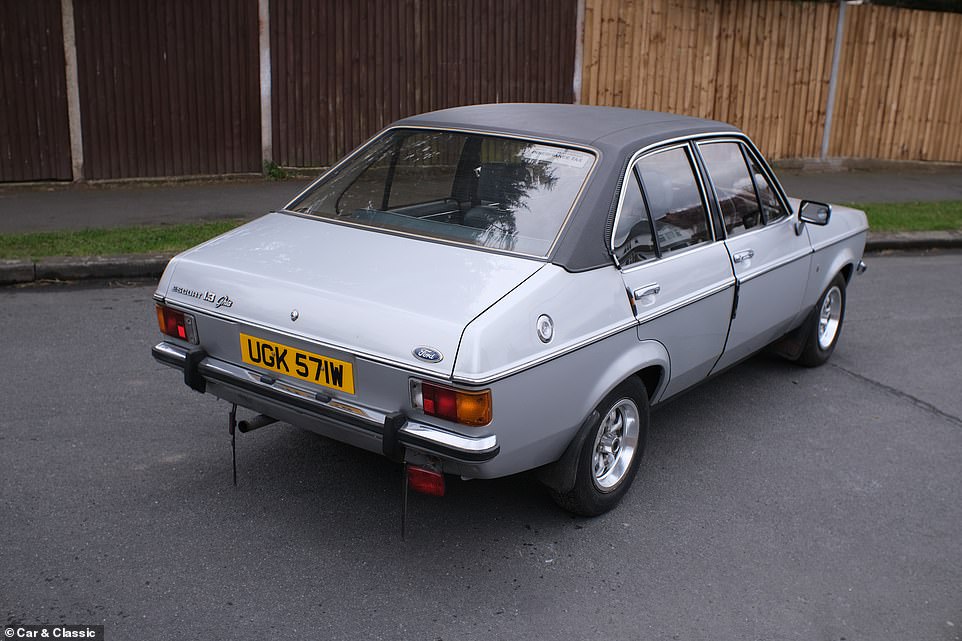 Other extra features that made the Escort Mk2 Ghia stand apart include side mouldings, additional chrome trim and the vinyl roof

‘With one owner, complete history and no questions, this is a very rare opportunity to own a truly original, unmolested Mk2 Escort,’ explains Chris Pollitt, head of editorial at Car & Classic.

‘Whilst the RS2000s and Mexicos command big numbers, it’s the less sporting models in the range that have become the ‘unicorns’ and disappeared. In original condition and with all the accessories of the time, this Escort will immerse the new owner right back in the 1980s with a practical and ready to use classic.’

The auction ends on Thursday 8 April at 20:00, with the current highest bid at the time of publishing being £8,500 and not yet meeting the reserve.

If it does manage to achieve a figure close to its upper guide price, it would be only marginally cheaper than a brand new Ford Fiesta supermini, which currently costs from £16,645 on the road.