One person in the US dies every MINUTE from COVID-19

One person in the United States died about every minute from COVID-19 on Wednesday as the national death toll surpassed 150,000 and California, Florida and Texas all set single-day highs for fatalities.

The United States recorded 1,461 new deaths, which is the highest one-day spike since the 1,484 recorded on May 27.

Coronavirus deaths across the country are rising at their fastest rate in two months and have increased by 10,000 in the past 11 days.

Nationally, COVID-19 deaths have risen for three weeks in a row while the number of new cases week-over-week has fallen for the first time since June.

California, Florida and Texas, the three largest US states, all set one-day records for fatalities from COVID-19 on Wednesday.

The United States recorded 1,461 new coronavirus deaths on Wednesday, which is the highest one-day spike since the 1,484 recorded on May 27 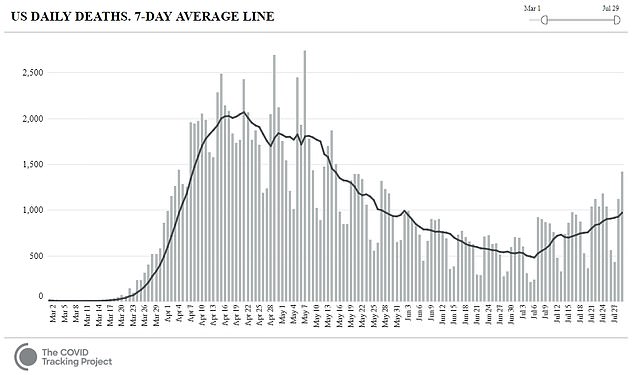 Coronavirus deaths across the country are rising at their fastest rate in two months and have increased by 10,000 in the past 11 days. Nationally, COVID-19 deaths have risen for three weeks in a row 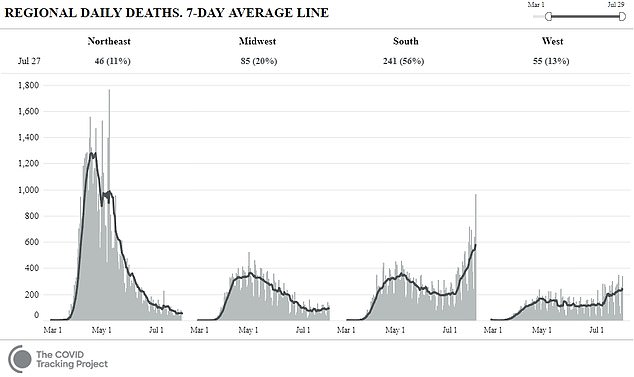 Texas leads the nation with nearly 4,300 deaths so far this month, followed by Florida with 2,900 and California, the most populous state, with 2,700.

The Texas figure includes a backlog of hundreds of deaths after the state changed the way it counted COVID-19 fatalities.

The three states together account for one-quarter of the total US population.

The pace of coronavirus infections has accelerated since late May and the epicenter has moved to the South and West from New York.

While new infections appear to have slowed, deaths have rapidly risen in July in California, Texas and Florida.

New York, however, still leads the nation in total lives lost and for deaths per capita.

Even though deaths are rising across the US, they remain well below levels seen in April when an average of 2,000 people a day were dying from the virus. 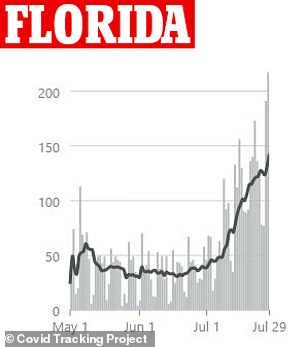 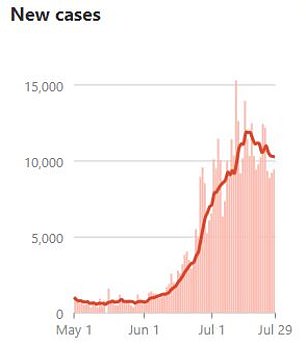 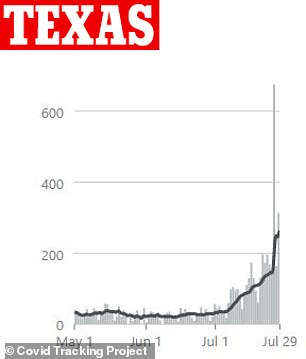 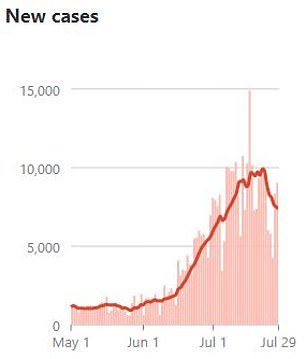 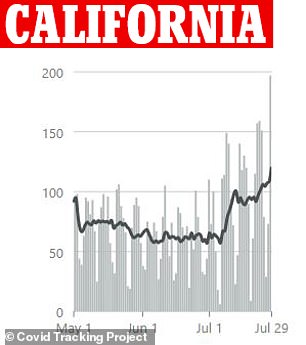 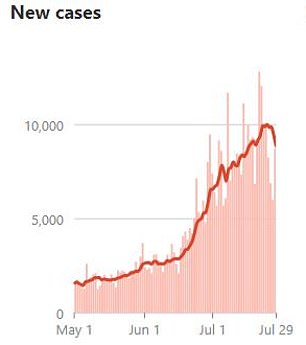 The University of Washington’s Institute for Health Metrics and Evaluation predicted in March that the pandemic could kill more than 81,000 people by July.

In its latest statement in mid-July, the IHME said its model now projects the death toll at more than 224,000 by November 1.

It said many fatalities could be avoided by preventative measures such as masks and social distancing.

Many health experts say the outbreak could be brought under greater control if guidelines to maintain social distancing and wear masks in public were enforced nationwide. 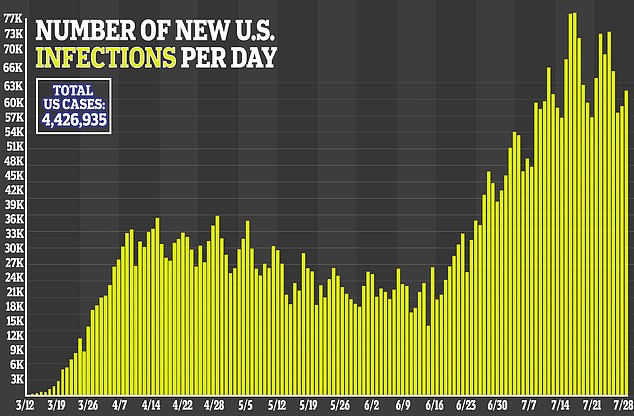 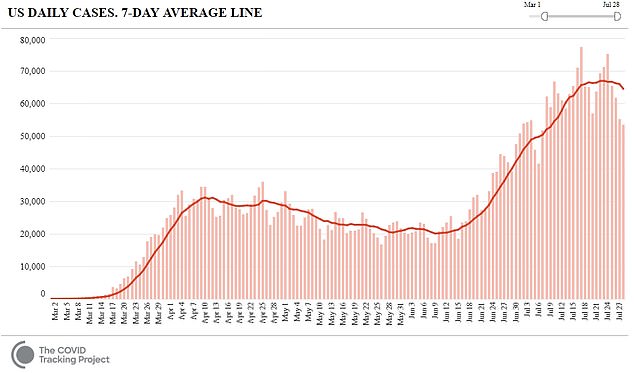 Trump has rejected the idea of a federal mask order and was initially reluctant to be seen wearing one but has since come around to supporting masks.

A spike in infections in Arizona, California, Florida and Texas this month has overwhelmed hospitals and put the states in a dire situation.

There are signs the virus has also been spreading farther north in recent days, causing alarm among public health officials who fear states are not doing enough to avoid catastrophic outbreaks like those seen in the Sunbelt in the past two months.

Dr Anthony Fauci and Dr Deborah Birx, both White House task force members, have said there are signs the virus could be peaking in the South and West while other areas were on the cusp of new outbreaks.

Cases are now mostly rising in the Midwest, which public health officials say is a sign the virus is spreading north from the Sunbelt states.

Fears are growing about the potential for a significant uptick in the Midwest, including Minnesota, Wisconsin, Ohio, Indiana and Colorado, which has been fueled largely by a rise in cases among young adults, who have been hitting bars, restaurants and health clubs again.