Scientists have taken another important step towards building the world’s first bionic eye, which could give millions of blind people the chance to see again.

In a world first, a team of researchers have built a three-dimensional artificial ‘eyeball’ capable of detecting changes in light levels.

The bionic eye, which mimics the function of the retina in order to restore sight, works in tandem with an implant to convert the images it sees into electrical impulses for the retinal cells, which carry image signals back to the brain.

By using 3D printing, scientists were able to produce the prototype much faster than previous efforts – sparking hope this could be a viable commercial solution in future.

However, there is no date on when a final version will be ready for patients.

Researchers say the next step is to create a prototype eyeball with more light receptors to re-create a greater quality of sight.

They are also looking to find a way to 3D print the same technology onto a softer material, which could then be inserted into a real eye socket.

Scientists are one step closer to creating the world’s first bionic eye that could give millions of blind people the chance of seeing. In a world first, a team of researchers have created a 3D artificial ‘eyeball’ that is capable of detecting light levels (pictured)

University of Minnesota researchers created the artificial eyeball for the first time using a 3D printer to add light receptors onto the hemispherical surface, which is half a sphere.

It is the first step toward creating a ‘bionic eye’ that could someday restore sight for blind or partially-sighted people.

Bionic eyes could also be used to enhance the vision of sighted people.

‘Bionic eyes are usually thought of as science fiction, but now we are closer than ever using a multimaterial 3D printer,’ said Michael McAlpine, a co-author of the study.

Scientists had figure out how to print electronics onto a curved surface.

They started with a hemispherical glass dome, according to the paper published in the journal Advanced Materials.

Using their custom-built 3D printer, they lined it with a base ink of silver particles.

The dispensed ink stayed in place and dried uniformly on the ‘eyeball’, instead of running down the curved surface.

The researchers then used the dried ink to place photodiodes, which convert light into electricity, created using semiconducting polymer materials.

In total, it takes around an hour to complete a bionic eye using this method. 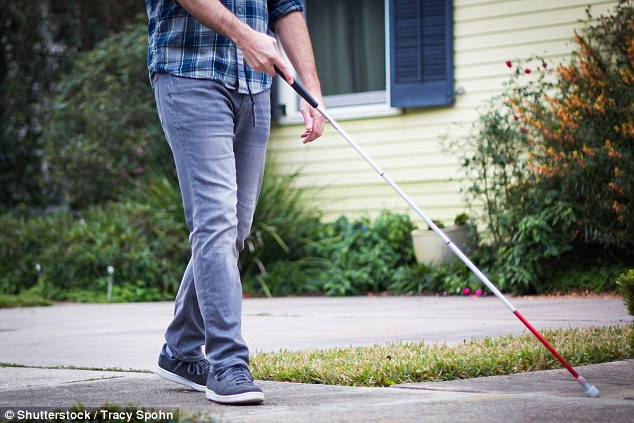 ‘We have a long way to go to routinely print active electronics reliably, but our 3D-printed semiconductors are now starting to show that they could potentially rival the efficiency of semiconducting devices fabricated in microfabrication facilities,’ said Dr McAlpine.

Highlighting another advantage of using the newly-developed 3D printing method,  Dr McAlpine added: ‘Plus, we can easily print a semiconducting device on a curved surface, and they can’t.’

For Dr McAlpine, the interest in this field is also personal.

‘My mother is blind in one eye, and whenever I talk about my work, she says, “When are you going to print me a bionic eye?”,’ he said.

The University of Minnesota researchers say the next step in the process is to add more light receptors to the artificial eyeball, as well as find a softer, more forgiving material that could be used for a prototype that fits inside a real eye socket, or orbit.

This is not the first time these researchers have 3D printed bionic body parts.

A few years ago, scientists produced a ‘bionic ear’ and since then they have 3D printed life-like artificial organs for surgical practice.

They have also made an electronic fabric that could serve as ‘bionic skin’.

HOW DO MIND CONTROLLED PROSTHETICS WORK?

Prosthetics that attach to part of the human body are often objects that allow a person to perform a specific function – such as blades for running.

Scientists are working to develop prosthetics that are personalised and respond to the commands of the wearer.

To do this, small pads are placed on the skin of the patient.

They are located around the end of muscles and where the nerve endings begin.

The pads detect the electrical signals that are produced by the muscle nerves and translate this via a computer.

To trigger these sensors, the patient must actively think about performing an action.

For example, in order to signal a bicep contraction, the person wearing the prosthetic would have to think about bending their arm.

By understanding what muscles are being signalled by the brain to contract, scientists can predict how a limb would move.

This is then recreated by the prosthetic in real-time, allowing wearers to think an action and then the artificial limb will perform it.