One wedding and five funerals: What a typical CofE church will host next year

One wedding and five funerals: What a typical CofE church will host next year as their decline continues

A typical Church of England parish church now hosts only one wedding every year, figures show.

The Church’s statistics also reveal that just five funerals are held at these middle-sized churches each year.

Smaller churches often have no weddings during the year.

The admission that the traditional white church wedding is dying out in many parts of the country follows figures showing that congregations in the CofE are dwindling fast.

A typical Church of England parish church now hosts only one wedding every year, figures show

The number of church weddings has been declining steeply since a change in the law in 1995, which allowed civil weddings in places such as stately homes, hotels and football grounds, shattered the Church’s monopoly on romantic wedding venues.

Last year a ‘median’ middle-sized church had just one wedding, four baptisms and five funerals. Only three children attended over the course of a week.

The biggest 5 per cent of churches staged ten weddings, together with 28 baptisms and 32 funerals during 2017. However, the smallest half of the CofE’s 16,000 churches usually had no weddings, the figures show. 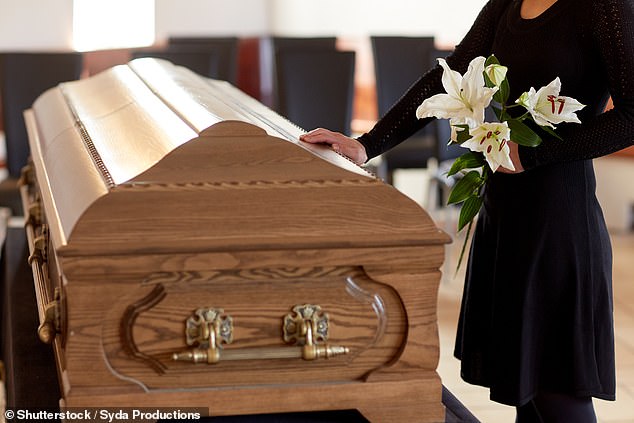 A middle-sized church attracted a Sunday congregation of 28 in 2017, and at Christmas, when church services remain highly popular, it had 94 worshippers.

The collapse in white weddings has come despite the CofE’s efforts to promote the attractions of getting married in a church.

Over the past two decades, restrictions on which church couples can choose have been loosened so that they can pick any church with which they have a connection rather than just in their local parish.

A ban on remarriage for divorcees has also been lifted so that someone who was not responsible for the break-up of their first marriage can marry again in church with official approval while their divorced spouse is still alive.

Critics have accused leading churchmen of preaching on poverty and climate change while failing to promote the virtues of marriage.

Harry Benson, of the Marriage Foundation think-tank, said: ‘The Church needs to sell marriage rather than weddings. We are all obsessed with celebrity weddings, but in the long term more couples will marry in church if the Church of England talks about the benefits of a formal commitment.’

Church leaders have countered criticism of falling congregations and wedding, baptism and funeral numbers by pointing to the growing presence of the CofE online and in activities outside services, such as food banks, night shelters, lunch clubs and community cafes.

Last month, the Bishop of London, the Right Reverend Sarah Mullally, said: ‘We are reaching more people than ever through social media … and millions encounter the Church in their daily lives.’