Women using online sperm donation websites are being harassed and tricked by men they meet on the web, an investigation has revealed.

Growing numbers of women wanting babies are turning to free, unofficial websites where they can find sperm donors without paying private fees of up to £1,300.

But men are trying to pressure or mislead them into unprotected sex or sending them inappropriate pictures, users claim.

Experts warn vulnerable women are putting themselves and their sexual health at risk, while official sperm banks are struggling to find good quality donors.

Growing numbers of women are turning to an online world of free, unregulated sperm donors to avoid having to pay thousands of pounds for private treatment, the BBC reports

An investigation has revealed a growing trend of women using unregulated sperm donation websites which put women in touch with willing men.

Online sperm donation is legal as long as women are not charged money for the service, though they can be asked to cover expenses.

But one user said she found out her donor was actually married and had had a vasectomy – suggesting he was just using the website to find sex.

And others have been told by men online they would have a better chance of conceiving through natural insemination – unprotected sex.

Experts told BBC Inside Out North East & Cumbria women are at risk because there is no STI screening or medical testing required for unregulated donors.

The risk may not even be worth the result, experts warn – official services only use donors with confirmed high sperm counts but there is no such testing in the online world.

One woman on the programme – a 26-year-old from Yorkshire given the name ‘Sarah’ – said she had been tricked by a man she met online.

Sarah said: ‘I’m single and not really wanting to find a man and go through the traditional route.’

WHAT IS ARTIFICIAL INSEMINATION?

Artificial insemination – also known as intrauterine insemination (IUI) – is a fertility treatment which involves inserting sperm into a woman’s uterus without her having sex.

The therapy can be used by people who can’t conceive naturally or by women who want to have a child without a male partner.

It may be offered on the NHS for people who are unable to have vaginal sex, if it is dangerous for a couple to have sex (for example if one has HIV), or if a same-sex couple has failed to get pregnant using private services.

These sperm are then delivered into the womb through a flexible tube called a catheter, in what is usually a 10-minute painless process.

But when she met a potential sperm donor through a specialist website, it turned out it would have been impossible for him to donate sperm.

‘We met in July, for about two and a bit months it was going on,’ she said.

‘Ultimately it turned out he was married. And he’s actually had a vasectomy, so was no way viable at all.

‘It made me feel like I couldn’t trust people on the site. I felt like it actually should be policed by a proper organisation not just some random person out there.’

Sarah reported the man to the website’s administrators and his profile was removed.

She added: ‘There have been a few idiots that you really wouldn’t want to interact with, because they do harass you or start sending you images you really don’t need to see.’

Other women are speaking with unknown men, who may not even give their real names, who offer their sperm to be used for artificial insemination or offer women natural insemination.

The services are being used by women who want children but cannot afford official insemination.

The NHS has specific criteria for who can receive the treatment and a single attempt can cost £800 to £1,300 privately, so women are turning to men offering it for free online. 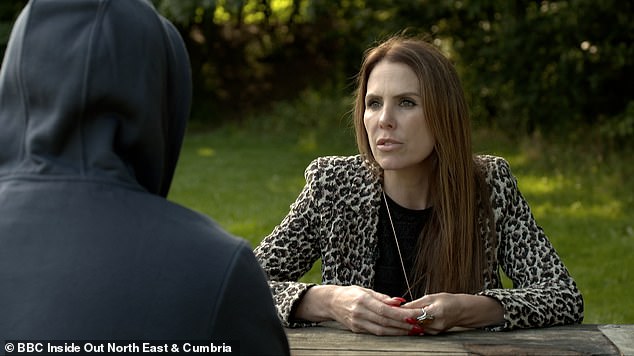 Reporter Emma Kenny interviews an anonymous sperm donor, who is one of many men offering their sperm for free to women over the internet

Fertility expert Doctor Larisa Corda told Inside Out the increasing popularity is ‘alarming’.

She said: ‘I think women are putting themselves in an incredibly vulnerable position – medically speaking – and secondly the potential for abuse.

‘In the ideal world I’d love to see them shut down, because I think women’s safety and welfare has to be paramount here.’

Alison Lamont, from Newcastle Fertility Centre said: ‘We check for STIs, we check for infectious diseases, and we also check the complete medical history.

‘It is pretty hard finding donors. We do get a lot of people enquire but maybe only five per cent of them actually have the right amount of sperm in their sample.

‘We are having to import from Europe and sometimes further afield just to keep up with the demand here.’

Inside Out met one sperm donor in the North East who says he has had six successes from his donations and another child on the way, all through artificial insemination.

‘In the beginning it was a bit selfish, he said. ‘I didn’t have kids of my own, kind of like leaving my legacy.

‘But when I started to see children born, I got the first few photos, I realised how happy I was making people.’